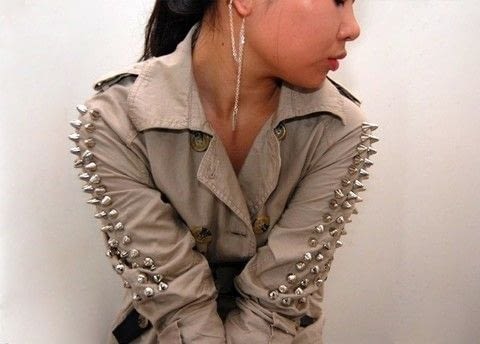 NJ T. 22nd September 2014
I really like this and I do happen to have an old trench coat so got to get the studs. Thank you very much for sharing.
Reply

Kim · 1 project 4th November 2011
tHIS IS BEAUTIFUL!!! One Question though, Do the studs catch other fabric you would wear under the coat or did you cover the ends?
Reply

Nicole R. · 3 projects 27th August 2011
wow I love trench coats I think they look fab on anyone but the one draw back is they are all so very similar, I love what you have done to make sure that yours stands out in a crowd!!

Kirsten Nunez · New York, New York, US · 21 projects 25th August 2011
Yes, I've seen that one in the past. However I personally wouldn't use wood and glue on any of my clothes, and would rather use real studs - but to each his/her own.
Reply

HarleyHeartless · Syracuse, New York, US · 2 projects 25th August 2011
Ha your tutorial reminded me of this one http://s3.amazonaws.com/data.tumblr.com/tumblr_lifi6oPhdD1qzymieo1_1280.jpg?AWSAccessKeyId=AKIAJ6IHWSU3BX3X7X3Q&Expires=1314389141&Signature=LwncRDuQDazVcfxFadlQ0s9SklM%3D
Reply