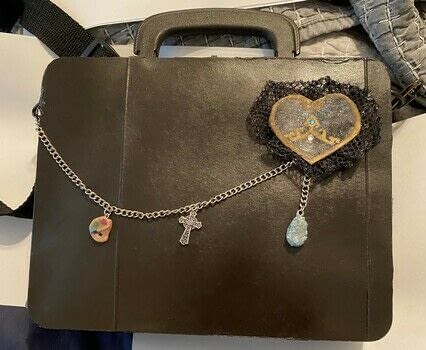 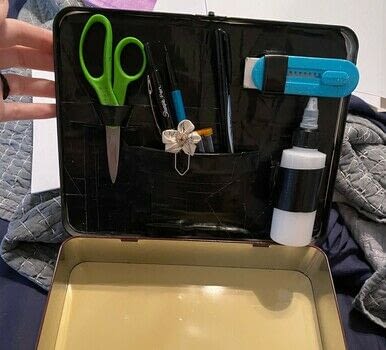 Based on Sketchbook Satchel by Kin Dragon
I used a novelty pez candy tin (it was "the office" themed and looked like a briefcase) added spots for glue, scissors, an eraser, and a pocket for pencils, paper clip bookmarks or whatever else you can get in the pocket.
And I wanted to make it look like something from "Shugo Chara"
(Love the Punk rocker goth clothing style of Amu, the main character and wish I could have dressed more like her when I was teen despite how she was younger then that)

I first covered the tin with duct tape, but ruined the first tin.
(Luckily these were later on clearance and I bought all the tins. In hind sight the concept of a collectible candy tin was great but it was too pricey in the first place for people who were even fans of the series, I was not one of those people but it was still pricy to start with)
The next attempt; I spray painted the tin black, made it look less like a "windowed tin", added some attachments for shoulder straps and voila!

This was a bit of a challenge, a real money and time sucker.
I would recommend only doing something like this if you have a something cheaper and a lot more time then I did when then was made.