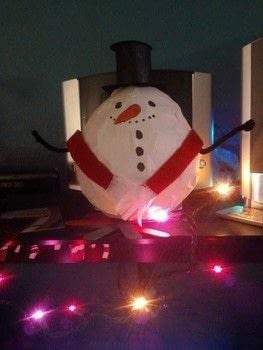 This chubby little guy can make anyone get in the holiday spirit!
I don't have pictures of the "how to", so I'll just have to describe it here.

First, the time limit I've given this of 30 minutes is really longer than it took me. I'm assuming sewing time might take longer or using regular glue would take longer to dry. I actually used super glue as I ran out of glue sticks for my hot glue gun.

Also, I made the paper mache body way ahead of time. I'd made it for another project but never used it. If you want to make your shape, add 24 hours into the mix because you really, REALLY want it to be completely dry before you paint.

Paper Mache "glue" recipe:
Pour some white flour in a bowl, and add water gradually until you have a consistency that will work well. (Use a small kitchen mixer so you don’t have any lumps). I use the "raw" flour method as it's stronger than boiling it. However, using the raw method requires that each layer be dry before moving on to the next (to avoid mold). You can "google" paper mache recipes to find the best one for you.

Ok, so assuming you've blown up your balloon to the size you want and you've placed the strips of paper dipped in the paper mache glue around the balloon (make it about 3 layers as you want it sturdy) and they've dried completely, you can go ahead and stick a pin in and pop the balloon. It should be the shape of the balloon and ready to go.

I used plain white paper on my snowman because it was for a different project that I needed white for and I thought I'd remove the whole "ugh, why did I use newspaper and now I have to paint it and wait" drama from the craft. If you enough layers down, you can SAND any rough spots with a piece of lightweight sandpaper. I didn't sand my snowman, though.

So, first thing I did was to take the four popsicle sticks and glue them together in a star formation. I made a cross with 2 of them, then laid the other two diagonally over the center of the cross on each side. I used super glue to get the process going faster.

Then I took a black art pen and drew circles for buttons and eyes and an orange pen to make a carrot nose. I then took a long black pipe cleaner, folded it in half and cut it. I bent it to look like arms and made a small circle on the non-hand end so that I could glue it to the body of the snowman.

To make the scarf I took red felt and cut a long strip. As my snowman is quite round I ended up needing another long strip of red felt and sewed them together in the back. Then I took white felt and made tasseled end pieces for the front. I glued the scarf at the center in back of the snowman, over the arms and in front to make it secure.

To make the hat I took black card stock and rolled it around the 1/2 toilet paper cardboard roll and glued it in place. Then I cut a circle for the top part of the hat and a larger circle with the center cut out for the brim. I glued on top of the snowman's head.

Finally, I used super glue on the popsicle stick star (in the center where they all meet) and glued the snowman onto his stand.

meg s. · Chicago, Illinois, US · 97 projects 10th February 2013
I made over 120 gift last year for christmas. Plan on doing it again this year and I have a feeling i will be making a few of these guys! thanks again!
Reply

Jennifer A. · Seattle, Washington, US · 9 projects 10th February 2013
Thank you so much, Meg! We had fun this Christmas season coming up with cheap decorations and this guy was our favorite.
Reply