Panja, Or Back Of The Hand Jewelry 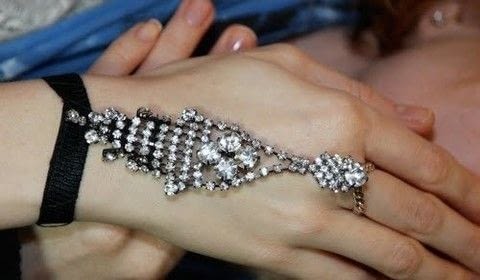 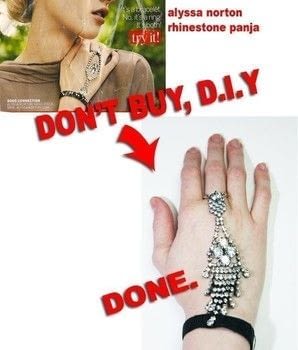 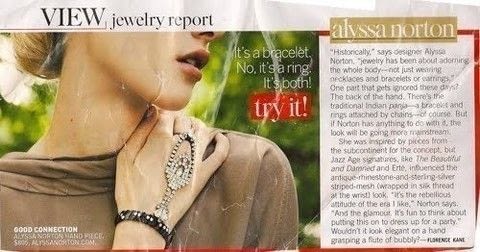 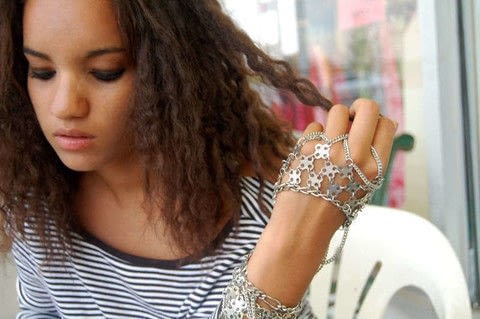 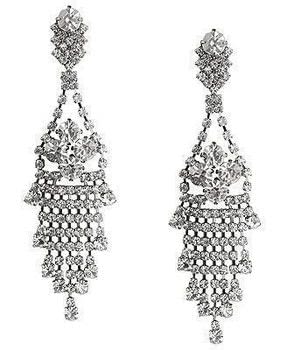 DIY: Panja, or Back-of-the-Hand Jewelry
I became obsessed with making myself a Panja [i.e., back-of-the-hand jewelry piece] since seeing the above in Vogue October 2009. For all it's highbrow designer, impossible-to-make-yourself fashion spreads, once in awhile the magazine showcases an idea that's just mindblowingly awesome. How cool is this rhinestone-and-chain Alyssa Norton piece that the model above is wearing? (All her jewelry is really eclectic and covetable...to sum it up to its lowest common denominator, she likes wrapping silk thread around rhinestone chains; making rhinestones "cast" in metal and set into jewelry as if precious stones; barettes with dangling cords and rhinestones; and chain mail. Def. check out her site if you get a chance!)

But I've had Panjas on the brain since about 2005, when I saw the above Hahn An Su (sp?) design in a Vivi Magazine. I didn't know what they were called then, but I definitely wanted one!

And then recently I saw this photo posted at Maverick Malone. She's such a cool girl - and has great style - she just wrapped this broken necklace around her hand and wrist and called it a day. Love.

I don't really know much about Panjas, so I am unable to educate anyone about them (and if they have religious significance I'm very sorry for my desecration and sacrilege) but....

Perhaps you can feel a DIY coming on?? LOL

I'm not paying $805 for the Alyssa Norton piece! So here's the DIY:

Omo · 2 projects 10th October 2011
I use to take my Silver chain, wrap it around my wrist and my middle finger so that it would form this. I was always curious about this, so I Googled it and they called it an "Indian Slave bracelet" which was weird for me because @ that time becauseI pulled it out of my head. It is by pure accident that I've stumbled upon ur tutorial of how to make one. However, it is not an accident that I love it (everyhing happens for a reason). Than you and this is really great work =)
Reply

carlyjcais · Portland, Oregon, US · 61 projects 17th November 2009
Thank you Leslie M. and lydia L.! The piece wasn't my original idea, but I was really proud of how it turned out! Definitely a way to recycle vintage rhinestones if ya got em!
Thanks for looking-
xoxo
Carly
Reply

lydia L. · Skövde, Västra Götaland County, SE 17th November 2009
just HAD to favourite this tutorial as soon as i saw the picture!!!...thank you sooo much!
Reply