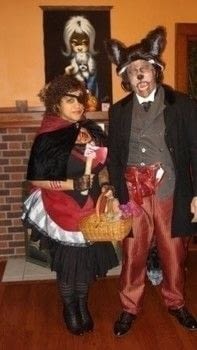 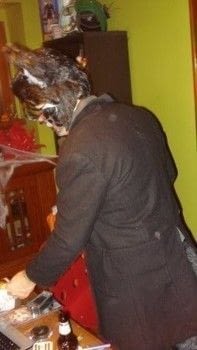 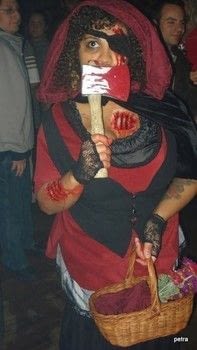 A not so cute couple's costume
Me and my man as LRRH and TBBW - after they've attacked each other - you'll notice I've managed to disembowel him. Go me! Took a long time to put on the make up and wounds, but it was worth it. Lots o' fun! We'll definitely be reusing these again in a Halloween or two.

For these costumes I made my dress, hood, eye patch, and wounds, my boyfriend's ears, tail, pants, guts and cravat. I also did my boyfriend's make up, modified a coat to make his frock coat and bloodied up a perfectly good novelty hatchet to get the effect I wanted. I already have a tutorial up for the fake guts I made and for his make up. Might make one for the tail and ears as well for the wounds I made - just have to find the time and the pictures!

Miss Scissors posted this project as a creation without steps