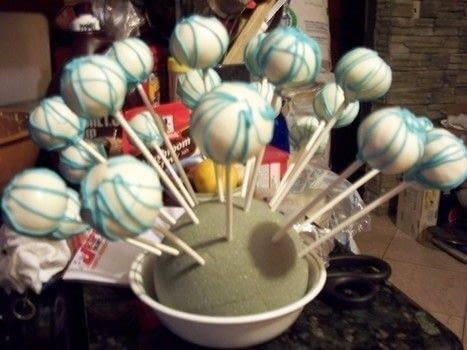 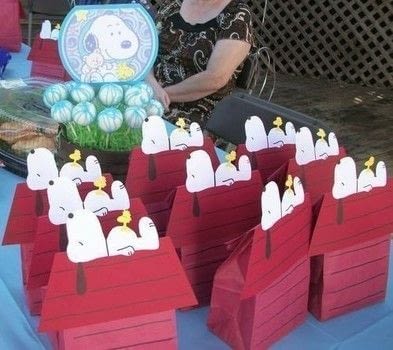 Based on Easy Cake Pops by Little Miss Momma
I made these for a Snoopy-themed baby shower and made them into a centerpiece. I used Yellow cake, cream cheese frosting, and plain white chocolate melts for this version, and used blue because the mommy-to-be is having a boy.

The second picture was rushed, which is why NOTHING in the background is clean. >_<
But it's the only close-up I got. = /

These were pretty simple to make, although I did have a few casualties. Make sure that you read the recipe and use a HALF of a can of icing per box of cake mix, otherwise the cake won't hold it's shape.

Also, if it seems like the cake ball is going to fall off the stick, it probably is. I found that that usually happened when I didn't center the stick right, but if you put the pops into foam for them to harden, you should be able to salvage some by making sure that the thicker parts are facing up so that it bears the weight of the cake ball.
Oh, and be careful when melting chocolate. You definitely want a smooth consistency, so turn the heat up at first to get it melting, then gradually turn down the heat so that it's just hot enough to keep it smooth and lump-free while you work. Be patient; this could take a while. Use Crisco if it's too thick. I've also seen people use vegetable oil and get decent results, but whatever you do, DO NOT USE OLIVE OIL. The flavor is way too strong and makes for nasty chocolate.

I used gel food coloring as suggested in the recipe, but my blue came out grainy; not sure why. I might try regular food coloring next time in a little bit of the chocolate to make sure it doesn't mess up the entire batch.

Make sure you have a couple of plastic baggies on hand if you're doing any striping or whatever--I only had one and the seam broke so I had stripes and globs. I was able to fix it with tape, but I realized I should have reinforced the tip in the first place.

Joanna posted this project as a creation without steps

Joanna · 4 projects 4th February 2011
I think my co-worker bought them, but someone definitely made them. Maybe Etsy? They're pretty simple. Just cuta trapezoid shape out of red paper to match the bag and stick it to the bag about an inch or two from the top so you can fold the top back. (I'd suggest putting glue or tape on the bottom half of the roof part so that when you fold the top back you can't see the bag around it.) Make the lines, and you have Snoopy's house. After that, you just need to cut out a picture of Snoopy and Woodstock to glue on the top of the trapezoid you cut out of red paper. When you're all done, add any details, fold the top back, and you're done. =)
Reply