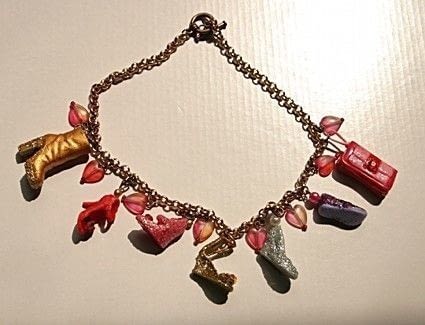 Based on Barbie Shoe Necklace by yesooll
I had bought a while agoo, some barby shoes and i was planned to make a necklace of it. So i was finnisched i had to look who has made one first to added to the first one.
But i have glitter and add some feak crystals too and some hart pearls i had.
Because i'm an growing up person it has some thing more than just the barby shoes.
so i have painting it and glittering it some more.
the time is without drying time.
When i had finished the painting and glittering effects i have gave them an nail polish coating too.
And now i will make the first idea, i hope you like this stuff, i had seen a while agoo an pimp glittering barby shoe earing, so i thought if i paint and glitter the shoes it became awesome. But as some of you know i love glitters and kitsch as well.

If you will a tute i make one, so let me know, i thought maybay there is one at the site. And i see lots the same idea in how toos on the side allready, so if you can't find it, i will make one.

Jet H. posted this project as a creation without steps

Samantha B. · 9 projects 8th September 2010
Love this. My Barbie used to always lose her shoes anyway. (That was a long time ago, of course.)
Reply

Nattie Gurl · 58 projects 26th April 2010
Perfect! I have been wanting to make some Barbie shoe jewelry but am having a hard time finding Barbie shoes down here in SE Netherlands. Have you any recommendation where is best to get some of these? I see in the local toy stores you have to buy a doll and you get normally only 1 pair of shoes. I don't want the doll I want to collect shoes from barbie and Ken.
Reply