52 Reasons I Love You 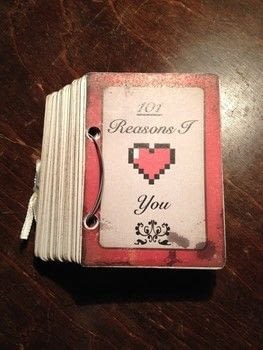 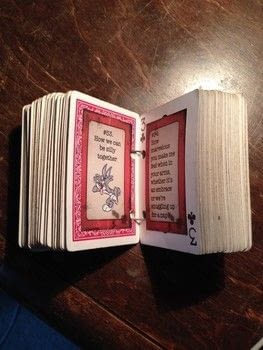 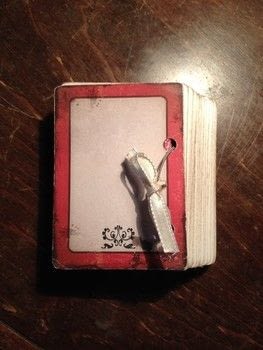 Create a cute, nifty little booklet for your lover to remind them of all the reasons you love them!
I've always thought the "52 reasons why I love you" bicycle card project was really cute, but I never had any reason to do it (until now that I've got a wonderful boyfriend, hehe). So! This is just my take on the project. There are how-to's everywhere, but this is the primary one I used: http://sweet-contemplation.blogspot.com/2012/07/52-reasons-i-love-you.html
There are a few things I did differently and altered slightly to my liking:

1) I enlarged the front piece (the one that says "52 reasons I love you") so that it was the full length and width of the playing card and covered the whole thing. I just thought it looked better that way. In addition, I enlarged each of the reason inserts so as to be larger on the playing cards and thus easier to see. Also I sometimes had a lot to say, haha.

2) As you can see in the pictures, I didn't stop at 52 reasons - how could I? - so I continued to 101 (for those of you trying to do the math, I took another ace of hearts from another bum deck of cards and used that for the cover and also, one of my "reasons" took up two cards because it was long) instead, which means using the front and back of each card, as you can see in the second picture.

3) I copied the idea from the cover and used it to create a back as well, as you can see in the third picture, so as to tie everything nicely together.

4) Many people recommended using ribbon or binder rings for holding the cards together, but I had a broken guitar string in my craft drawer and as it turns out, my honey plays guitar and bass (and he's really into music) so I thought hey, I should try and tame this guitar string into working for me. It took a while, but I was finally able to get it to cooperate without using a soldering iron (believe me, people, you have to be really dedicated to use guitar string for crafts) so I used that to hold everything together instead, and just put a nice little ribbon around the somewhat sharp edges where the two ends of guitar string meet. It was mainly for safety, but ended up turning out cute.

Overall, it's not a difficult project, it's just extremely time consuming because you have to 1) think of all the reasons and write them down, 2) find clip art or pictures that suit each reason, if you're into that (also optional, it just adds a nice touch), 3) print them out using the template (or not, it's optional, and there are others out there), 4) cut all the inserts out (thankfully I had a large paper cutter and didn't have to cut them out with scissors, by hand), 5) arrange the cards and glue in the inserts, 6) punch holes through all the cards at relatively the same places on each, and finally 7) bind them all together. It just takes a while, but it's totally worth it if you ask me. I'm really glad I finally was able to do this project and am very excited to gift it to my honey on Valentine's Day ^_^