A profile of up and coming fashion designer Erin Skipley. 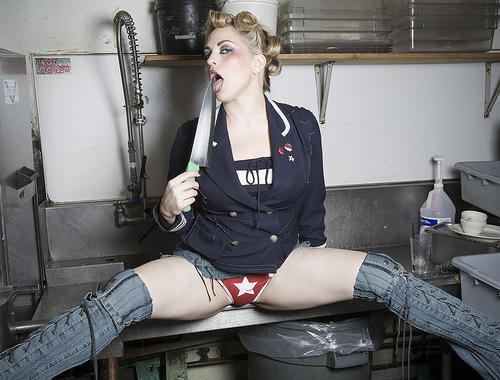 It all started with a song by The Flaming Lips, and positive feedback about her own personal style! That was the inspiration for designer, Erin Skipley to venture into the fashion business. However, this was not Erin's first experience in the fashion industry as she had already been a national makeup artist for Christian Dior doing runway makeup, and so in late 2004, early 2005 Yoshimi Designs was born.

Based in Seattle, Washington Erin takes to deconstructing tired old clothes and reworking them into original, unique and oh so chic pieces. Designing clothing for both men and women, these designs have been titled "urban wear" by Erin herself, while others have described them as Japanese street style and part ho chic. Whatever you want to call it or whatever labels you want it to have, I think that the one thing that can be agreed upon is that it is all one-of-a kind, very cool indie fashion!

Since the birth of her own line Erin has had exposure through indie fashion magazines and was even mentioned as a place to shop in the city guide section (Seattle) of Lucky Magazine. In the few years since her Yoshimi line came to life she has enjoyed a plethora of famous clientele, including model/actress Devon Aoki ( 2 Fast 2 Furious, Sin City), and bands such as Death Cab For Cutie and Daphne Loves Derby to name a few.

Aside from designing for the masses Erin also offers custom designs for her customers, which can be inquired about via e-mail. Along with four different locations for purchase in Washington, Yoshimi creations have also branched out and can now be purchased in Oregon and New York.

Find out more about Erin and Yoshimi at her website, add her as a friend on MySpace or utilize Erin's hair/makeup design services at