Chicks On Speed meet Cut Out + Keep for an art, music & fashion exploration. 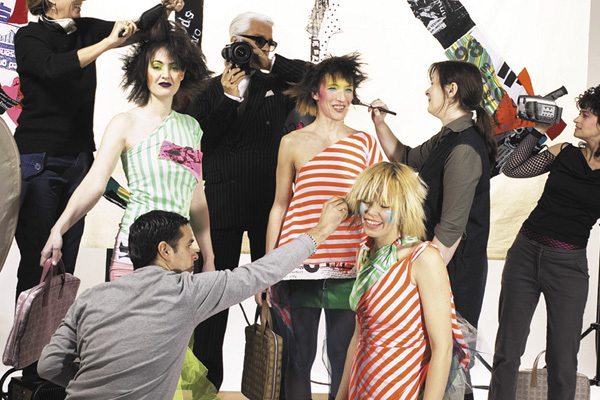 
Chicks On Speed formed what they refer to as a 'Fake Band', in Munich in 1997. "We didnt start a band, we started a large art performance collective with about 18 members and called it The Gang From Munich. Everyone just got so so caught up in their own thing, like everywhere, so it ended up just being three. Then there was the situation that the art world was a really slow way to work, with no feedback and very uninteresting galleries in Munich, so pop was our ticket out of the art ghetto. Over the years we have found our other members and have also found ourselves in a fast paced mix of pop, art, fashion and design."

The chicks don't want their work to be restricted to one form and believe that music, art and fashion go hand in hand. "In art school my professor told me to work in a minimal fashion and stay puristic, I didnt believe him for one minute, that wasn't why I wanted to become an artist! We want to do everything from surf wear to huge sculptures.

The girls are renowned for their unique sense of style and have their own fashion label. "We usually have a subject that the pieces are based on, either a socio-critical idea, a joy in the perversions of consumerism, or a bodily contortion to be experienced when wearing our pieces. The screen prints are important." Paper dresses are one of the girls signature peices, which they would throw in to the crowd during their sets. "We get back into that sometimes... in emergancy situations, when our luggage gets lost and we are in Albania on a beach, even paper dresses are hard to make!".

COS feel that hailing from different countries of origin has helped the band to gain larger worldwide appeal. "Scandinavia is great to play because the audiences are so well educated musically. As a contrast, its funny to play Bucharest, Romania as there is less of the brainless 'put your hands in the air' festival culture and the people don't really react as much to the music - this results in us having to work our butts off to feel like we are getting through to them and the show goes kind of nuts."

The chicks have recently set up their own record label, releasing material from the likes of Le Tigre and Angie Reed. "We love our artists, but some of them expect too much though and get all nasty. But dealing with a few idiots is worth the risk when giving Planningtorock, Angie, Ana De Silva and Dat Politics a plateform to release records on. A great project is the Girl Monster compilations, we have just released one, but will continue on with them. We meet so many great, unreleased artists on the road, they have to be heard. A lot of people dont realize that a record company has become a social networkers institution, we have to pay into our company to keep it alive, but it is important to us that new music is released."

You can get more of your Chicks On Speed fix from their topsy turvy website or make friends with them on MySpace.