Horticultural experts, MODA Botanica chat to us about getting crafty with flower arrangements. 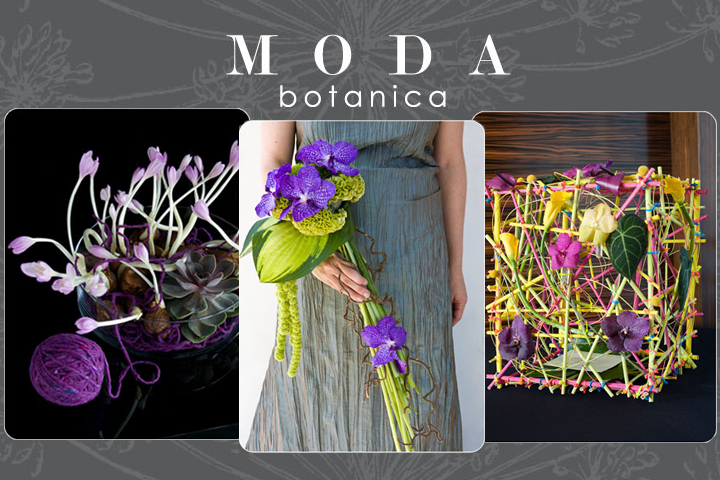 The ultramodern floral designers of MODA Botanica have been quite busy, and they don't mind a bit. They've been in business for just over a year, and like any florist shop they do arrangements for hotels, dinners, and weddings. But they also spend time dreaming up gallery-worthy pieces, one of which took top prizes at one of the world's most important flower shows this spring.

Snippets sat down with Judith Campbell, ArmasKoehler, and Bailey Hale in their charming space in downtown Philadelphia - part gallery, part florist's shop - and to our delight we discovered they'd created some arrangements just for us.

THROW OUT THE OLD RULES

The three friends met when Bailey and Armas responded to an ad Judith posted on craigslist, looking for designers to work with her on a project. It immediately proved to be a good fit, and they've been making strikingly unique pieces as a team ever since. Inside their studio is a permanent (until they get bored with it) installation: a tangle of branches that climbs from the shop's floor to ceiling, looking like something out of a Bjork video, or maybe the Brothers Grimm.

"A lot of my philosophy has always been, Flowers are beautiful! You don't really have to do anything to make a flower pretty. So part of my job is I need to bring something different to the flowers as a designer. Otherwise I'm just a flower arranger," Armas said.

Take baby's breath, he said, which is often used as an inexpensive filler in arrangements. They're currently a "much maligned" element in the floral design industry, but MODA recently bucked the trend with a display for a museum event that featured big clouds of the tiny papery white flowers.

"If you take materials that look cheap and do them in repetition or on a large scale, it looks purposeful," he said.

Quirky elements are a hallmark of the MODA aesthetic. Last year they designed and built a massive piece on-site at the Philadelphia Flower Show - with 10 acres of exhibit space, it's the largest indoor flower show in the world - which featured, among other things, several rows of water bottles illuminated by light boxes and test tubes wrapped in bright colored yarn. The design won Best in Show in Display Garden (Floral) and Best Achievement for Modern Floral Display.

The arrangements they made for Snippets featured flowers and branches, of course, but also acrylic yarn, rubber bands, plastic packing strapping, cable ties, and an explosion of drinking straws in fluorescent colors.

Fabulous, yet more than just plain pretty. These objects are useful design tools, especially for those working within a budget.

"Take a pretty generic, utility type of cube vase," Armas said, referring to the clear glass vases used in these designs. "Most people have them but often they're hard to fill if you don't have multiple flowers, which can be expensive. If you just take rubber bands or yarn and make a fun little grid, it becomes decorative and utilitarian at the same time."

This clever trick has a green benefit as well. If you let objects provide a structure for your flowers you can skip using gardener's oasis (that crunchy green stuff that comes in blocks), which is a petroleum product that can introduce harmful chemicals into the environment.

The designers love plants, there's no denying that. Bailey began gardening at the age of six, puttering around his grandparents' garden and learning the names of the things growing there. Armas started out his career intending to do landscape design.

But all three designers have other artistic interests, and they cleverly reference them in their floral designs. Bailey, for instance, is crafty.

"I met with a client last night, actually she's a friend too. She's a knitter and I'm a knitter too, and she's getting married in a couple of weeks. So we're making some felted bouquet wraps," he said.

Judith, an artist who got her undergraduate degree in printmaking, said some of her best ideas have come from trips to the auto supply shop, DIY home design stores, and Asian supermarkets.

For his part Armas enjoys gallery-worthy work like collage art and found object sculpture, but he's just as inspired by what he can find at the craft supply store - like the bejeweled brads he found the other day in the scrapbooking aisle. He currently has a crush on colored paper clips and magnetic boutonnieres, too.

"Part of it is, I like the contrast between something that's very mass produced, like the drinking straws, kind of something a little bit artificial - you put that up against the natural flower and I think it can enhance them both," he said.

You can find out more about MODA Botanica on their website. (Photography by Katie Haegele, Michael Persico & Sofia Negron).

Jacqui M.
“Got some good ideas for my wedding thanks! Didn't want anything to traditional and fussy, these are perfect!” 2nd August 2009

Britta J.
“beautiful, love the idea of wrappng yarn around the vase to make a grid