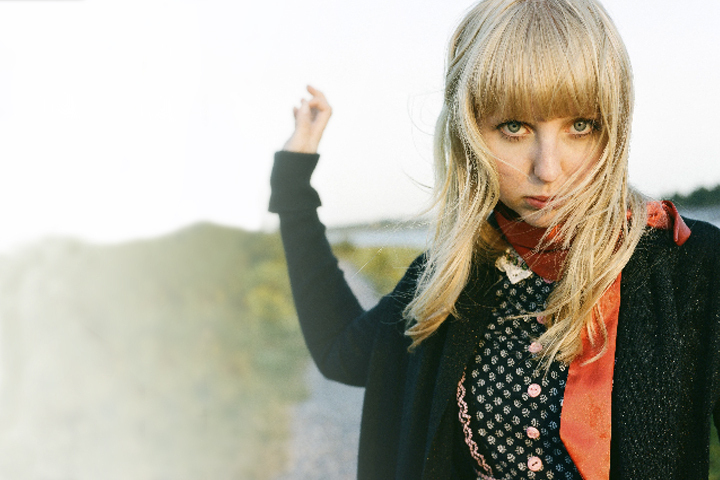 
Have you always been so creative?
My first memory of making music was playing a piano when I was about 4. I remember I coloured the piano keys with felt tip pen then played the colours. I have always been pretty creative, I guess its the way I am built.

You've written over 800 songs. Has music always been your passion?
Yeah, music is my life.

What did you want to be when you were older?
When I was tiny I wanted to be the tooth fairy, but then when I realized I would never achieve the grades to make me grow wings and steal teeth, I turned to music.

You moved to London when you were 16. Was it a scary experience at such a young age?
My motivation was music, I wanted to get away and be surrounded by music and meet people and have adventures, It wasn't scary, it was hard and very lonely at times. I didn't have much money, and I didn't know anybody, but it was exciting at the same time. I wouldn't do it differently.

What's your song writing process like?
Generally night time, sitting at a piano. I am very impatient, so if a song doesn't come out in 10 minutes, I move onto something else. Songs usually come into my life when I least expect them to, and at the most inconvenient times - just before sleep, just as I have left the house and driving the car etc. I have been known to call my own answering machine and record voicemail songs so I don't forget them.

"If you always buy things you love, they will generally always go together and even when they don't, sometimes they look even cooler"

Where would you look for inspiration?
Life, I think if I look too hard for inspiration I never find it. For me, it is quite a natural thing, when it comes it comes.

Who are your musical influences?
Everyone from Leonard Cohen to Mylo.

How would you describe your style?
My style is me, I don't follow fashion, I just wear the things I like. My mum said to me when I was little, if you always buy things you love, they will generally always go together,and even when they don't, sometimes they look even cooler! I quite like things that are a little bit wrong. Most of the dresses that I wear at gigs are creations I dream up.

Who are your ultimate style icons?
I love people like Helena Bonham Carter and Vivienne Westwood. They are so unique and beautiful, they don't conform, and aren't afraid to experiment and have fun with their style.

Where are your favorite places to shop?
I love Spitalfields market for querky summer dresses and I love Irregular choice on Carnaby street for pretty shoes, there is also a great stall on camden Market that sells weird and wonderful jewellry made from recycled tapes and other odd bits and pieces.

You make art films with your friends, how did this get started?
I guess you could call the films a hobby actually, me and my friend Tom just went out one Sunday in the city, it was empty and we had a video camera so we started filming things, that became a "pollyworld" film. We just put it on youtube for fun, we never imagined that so many people would watch it.

What's a typical day in the life for you?
I don't sleep very well at night, I often write till late, so I usually get up around 10am. Then every day is different depending on what I have to do. I think thats one thing I love about my job, one day I am sitting in a studio, the next day I am in a van traveling to a gig, the day after that I am chatting to people and doing interviews, it's always different. The few constants are that I try and get to the gym when I can, and I like to be by a piano at night time.

What's on your stereo?
On my record player is David Bowie's Changes album and the last CD I brought was It's Blitz by the Yeah Yeah Yeahs.

What are your hopes and dreams for the rest of the year?
I hope to keep on writing lots and playing live, and I dream that lots of people buy Bunny Club, which is my next single.

What's next for you?
Well I am still promoting my debut album, which is out now! I am also playing 1234 festival on Sunday, then supporting Amanda Palmer at the Union Chapel, then playing Bestival, so lots of live stuff coming up, I also have a live EP coming out on iTunes, which was recorded at The Roundhouse, when I supported Bat for Lashes, and Bunny Club is the next single, so it's pretty busy!

Find out more about Polly and hear some of her music on Myspace.