Burlesque performer Miss Dolly Rose teaches us the tricks of her trade. 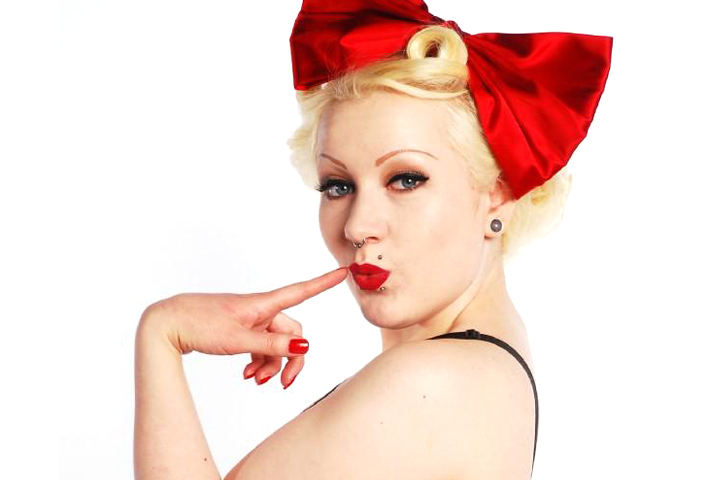 Miss Dolly Rose is an up and coming burlesque dancer who regularly performs in London. After less than a year of performances she has gained a lot of popularity, recently winning second place in the Best London Newcomer section of the London Burlesque Festival Battle Royale. Polly Noble caught up with her to get the lowdown on the art of striptease.

How old were you when you first discovered burlesque, and what first attracted you to it?
I was 16 or 17 when I first went to a burlesque night, and the first burlesque I saw was of the quite traditional glamorous variety. I was initially attracted by the glamour of it but as I became older and saw more different varieties of burlesque, I realised there were so many different styles. What inspired me to become a performer was the fact burlesque is so diverse and creative. I am also a huge fan of dancing, but was never the right type to become a classical dancer, so finding something through which I can combine my love of dressing up, being creative, performing and dancing all in one is brilliant!

How did you become a burlesque dancer? Was it difficult to get into?
I didn't start performing until I was 21, and before I began to perform I went to classes with Jo King, who runs the London Academy of Burlesque. I'd really recommend doing classes, as they are great for confidence building and learning about developing a character and putting a routine together, as well as technical basics. I got my first gig through a friend who was putting on a charity event and wanted performers for it. I was lucky in how things went after that in that a friend was running a well known night in London at the time and gave me my second gig which went really well. Once I'd done a few shows it became easier to get more... it's all about putting a lot of effort into getting an initial routine together, then persevering with promoting it!

What/who inspired your stage name?
My stage name is actually my real name! Everybody calls me Buddie, but I was christened Dorothy Rose, so Miss Dolly Rose seemed like the natural choice for a name to perform under and I didn't ever really think about what to call myself... when I was little I always felt annoyed with my parents for giving me an unusual name but obviously now I'm very happy that they called me Dolly Rose!

Your burlesque performances often incorporate retro music and clothing, particularly the style of the 1940s/1950s. What is it about this era which you like?
I think a lot of people look to the era of classic glamour and cheesecake pinups when thinking of burlesque ideas, simply because these costumes and characters lend themselves well to burlesque, and so it's very popular... it's the era when women had their hair set in beautiful rolls and wore fully fashioned stockings and so on and so it works much better for burlesque than modern day styles! Retro pinups are also very inspirational for poses, facial expressions etc. Recently I have been enjoying trying different characters and different musical styles for performing. I've done acts to music by artists such as Primal Scream and The Cramps, so although some of my routines incorporate the more traditional retro style others definitely don't!

Do you find that the vintage style costumes and make up you wear for your performances also influence your day to day style? And if so how?
To be honest, although I love vintage style fashion and makeup, I am far too lazy to keep it up all the time. Generally when not performing I can be found in jeans with messy hair! I do love dressing up from time to time though and so burlesque shows are always a nice opportunity to make a bit of effort style wise, something which is true of the audience as well as the performers. I guess the look does influence my style in a way from a day to day point of view, in that my looks naturally lend themselves better to the retro look. So little things like having red nails and lipstick and platinum blonde hair, and wearing pencil skirts sometimes, do translate into my day to day style, simply because they suit me better!

What different stages do you go though from initial idea to performance, and how long does it take?
I normally begin with a vague idea for a character or situation, which I'll then think out a bit more so that I have a basic plotline. Once I've done this I will start working on finding music appropriate for the routine and sourcing or making my costume/props at the same time. Once I have found the music I want the music is edited together and I start on the actual choreography. The choreography can't really be done until I have the costume as I need to be able to work on how to take it off! When I've got the routine all together I then film it a few days before I actually have to debut the act, so that I can see if there are any bits that aren't really working and need to be altered slightly. Altogether I'd say it takes me around a month to a month and a half to get a routine together!

Is it difficult to source costumes or do you have them made specially?
It's normally a mixture... I do buy bits but thankfully I have a very lovely mother who often makes parts of my costumes for me. I would be lost without her sewing skills! I think it's good to at least customise things if you buy them, as it's nice to be as original as possible and know that no-one else is going to have exactly the same costume. I don't have any routines where the costume has not at least partially been made or customised.

Why do you think burlesque had had such a popular revival in the past few years?
I think the whole cabaret type entertainment scene has become popular, partially because it gives people a proper night out-it's nice to be entertained rather than just standing around in a club sometimes. Burlesque is hugely entertaining and a lot of fun! People like Dita Von Teese and Immodesty Blaize being seen in the mainstream media has made people more aware of its existence. I think women enjoy it because it allows them to have fun and present themselves as they want to be seen, and women enjoy being able to see women of different shapes and sizes get up on stage and be confident with it. I think people really enjoy the creativity of some of the burlesque that is around these days. People are also very drawn to the glamour of the burlesque 'look', so I think that is something that initially attracts people to burlesque although there is a lot more to it.

Finally, do you have any tips for aspiring burlesque dancers?
Go to classes, and watch as much burlesque as you can, as you can always learn from what anyone else is doing! Also, learn to sew! And buy a kandi kane; they're good for sticking diamante on.

You can find out more about Miss Dolly Rose at her MySpace. She was also a guest blogger for Burlesque Against Breast Cancer, you can read her post here.