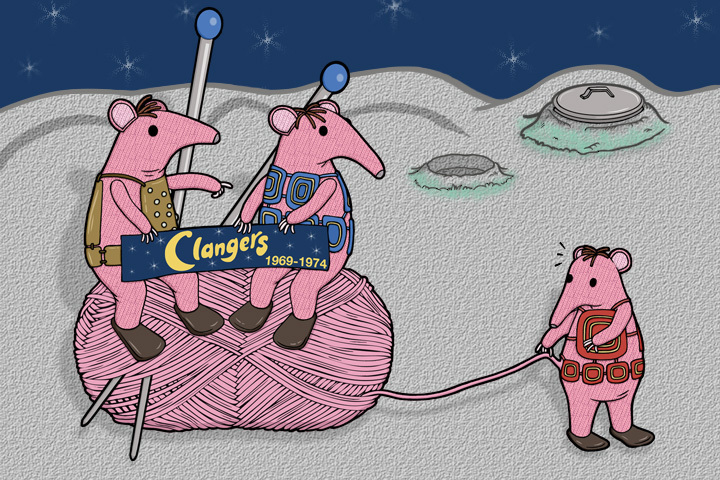 
A stop-motion animation about a group of small, pink, knitted aliens, which look like a cross between mice and anteaters, live on a distant hollow planet and communicate only in whistles. It doesn't sound like the treatment for a hugely successful children's television series and yet give anyone between the ages of 5 and 50 a swannee whistle and they will start doing an impression of those same creatures.

It's probably a good thing that the late, great Oliver Postgate was already an established name in the field when he came up with the idea for the Clangers; otherwise one of the most iconic children's television series might never have seen the light of day. Akin to the other much loved animations from Small Films (Oliver Postgate and Peter Firmin's production company) The Clangers features Oliver Postgate's reassuring tones as narrator driving the plot. However, the Clangers managed to be understood quite well on their own with their scored dialogue of hoots and whistles; that occasionally what they were really saying when their dustbin lid doors got stuck was less than polite seems only to have added to their charm rather than undermining it. With their charmingly odd score by Vernon Elliott and sound effects that combined the mundane with the fantastic, the series existed in its own little bubble at once utterly alien and hugely familiar.

One of the great strengths of the series is that however surreal things got the story retained a certain internal logic, never loosing sight of their main audience of children. Who, they believed, were willing to accept all sorts of unlikely things if they were fun, did like things to fundamentally make sense. There was always a sense that the series was made with a great deal of love and a lack of taking themselves too seriously, and in return their audience loved them too.

Although The Clangers only ran for two series between 1969 and 1974, somehow they have wormed their way into the national consciousness; their home-knitted charm retaining a special place in all our hearts.

Maisiee (:
“I love the clangers!