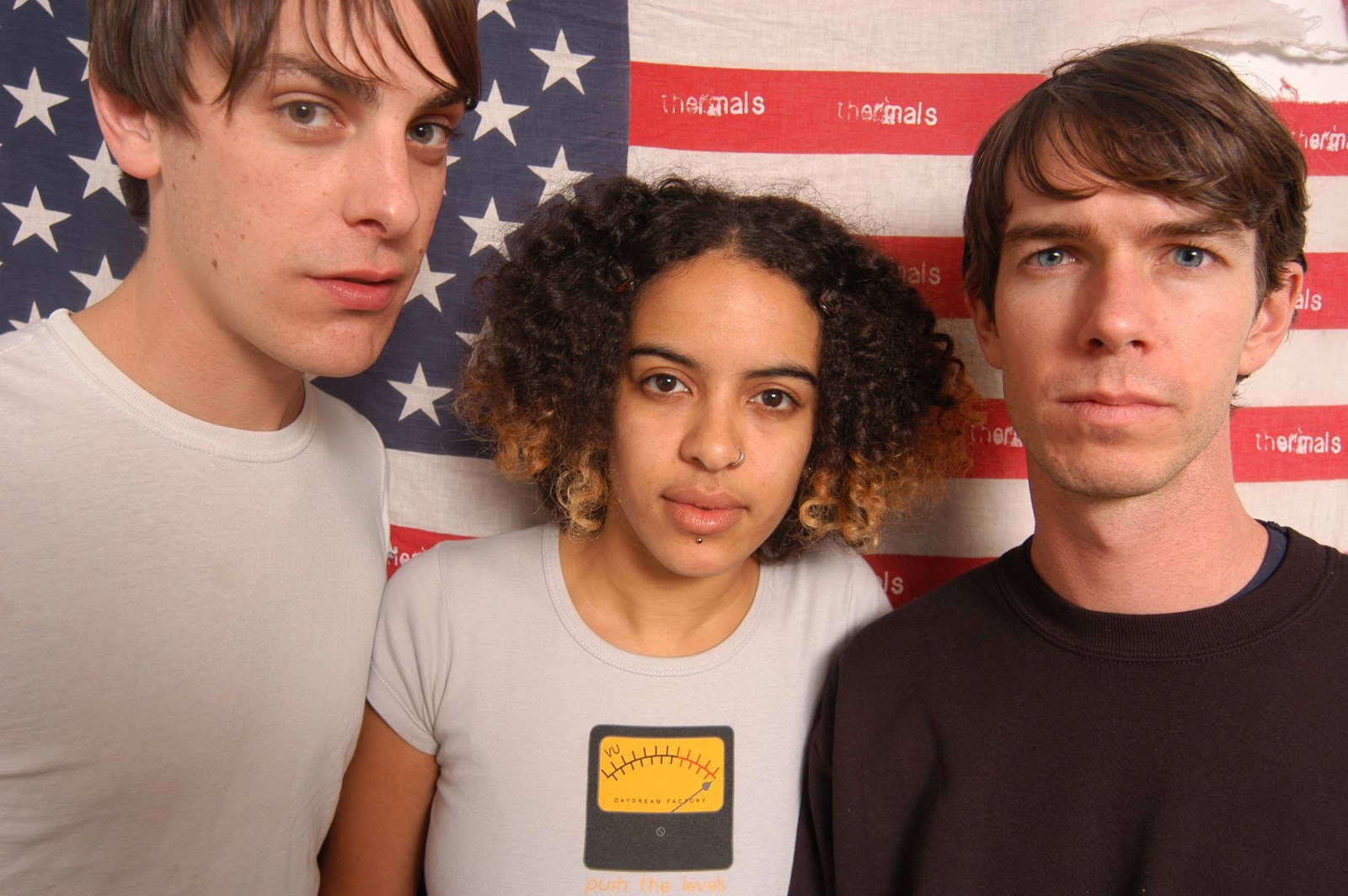 
The Thermals started out in Portland Oregon in 2002. "As a city, it's a lot smaller than you would think - 2 million people, but it feels like a small town. I've got a couple of friends from England who say it reminds them of home, because it rains so much. Right now, it's gorgeous, but a lot of the time it's like a sleepy, rainy town." describes singer Hutch Harris. "It seems like it's at a nice place at the moment - there's a lot of national and international attention, but it's not like every show is full of people from LA, record companies in suits looking for bands. I don't know how much it helps us, but we're always talking to people wanting to know about the scene here. It could be a year or 6 months, Portland could have everybody's eyes on it."

Originally the band consisted of Hutch Harris, Kathy Foster and drummer Jordan Hudson (who left in 2006). The latest album was recorded as a two piece. "That worked for us better than anything so far. Kathy and I had plenty of ideas, just the two of us - we wanted to keep it simple in the studio. Kathy and I have been in a ton of bands before this, and we were already comfortable with the setup. ". On touring the album, the band has expanded to include Lorin Coleman on drums and Joel Burrows on guitar. "The first two records we wanted to keep as a three piece - we recorded with not a lot of overdubs, so we could reproduce it live. Even though it was just the two of us in the studio we were like 'Lets put as many instruments as we want on there and worry about the live show later'".

With their first album, More Parts Per Million, recorded on a 4-track, and followup Fuckin A maintaing a lo-fi sound, their latest album is a slight departure. "I miss the 4-track - it's definitely where we started, but it's easy to outgrow really quickly." The Body, The Blood, The Machine, produced by Fugazi's Brendan ... has a much more polished feel, while staying true to the bands sound. "We're not, y'know, that great - we're not virtuosos or anything. It's good if the recording quality matches the level of where we're at, playing-wise. You don't want to bang out three chords and then have it be a big pristine power sound - it'd make us look bad, i think!". "

The band have been touring extensively across the US and Europe over the past months. "We usually visit UK, Germany France and Holland - we normally play a show in Zagreb, Croatia, which is usually one of the best - it's a ton of fun, people going crazy. Before, when we played shows the older the songs, the better the response - but now people are responding to the new record way more than the old stuff - It's good for us, we've played the old songs for years and we're getting burned out on them. We're most excited about the new songs, so for people to feel the same way is perfect."

"Before the last record came out, we posted a couple of songs, and did a 10 day tour - people knew those songs as well as anything we'd done - the record wasn't out and people were singing along. Thats when we were like 'Whoa, people are really paying attention to MySpace... I thought it was something like Friendster where you creep on other people - I really didn't know what i was about. I got really into it eventually because I just saw how many people are watching it - people are so obsessive about it, they're on every day. So you update your page, put a video on, put your blog up, and everybody sees it in the next 8-10 hours. Thats pretty amazing - not just that there are so many people, but they're on it so often.

When the Zune launched in America, Thermal's song Pillar Of Salt was one of the fifty pre-loaded songs. "We're getting our Zune - we had a song of ours come out on it - it's taken forever to get one, but I'm looking forward to having a couple of mp3 players on me at once.. I'm really into the downloads actually. If you can't find something, you can go online and grab it - and how could I not like that? It's a way to digest more music - you don't have you wait to find a record. It's cheap too...or free!"

When asked what was next for the band, Hutch divulged a little about the next album. "Kathy and I have written about 7 or 8 songs, I haven't written the lyrics yet - I hope we'll be demoing the next 2 weeks, and in between those tours I'm hoping to record our record this year and hopefully have it out next year."

You can find out more about The Thermals on their website or add them as a friend on MySpace.