A study and review of the classic film by Terrance Malick 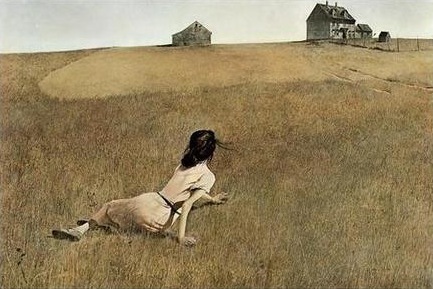 
So I come out of the cinema feeling disgusted. My girlfriend is all happy and dancing and singing about how this was her second time and it was just as good. So I marched her home and sat her in front of my TV and put on a DVD I thought would cleanse her soul.

"This my dear, this is Days of Heaven, this is what cinema was invented for, this is ART"

She called me snobbish and went to bed, I stayed up and watched a film I truly consider to be a work of art, as snobbish as that makes me sound (and I'm sure it does). In fact I see Days of Heaven as a painting come to life, to tell the story of the figures within it with some more depth.

Days Of Heaven, was released in 1978, and was the second and last film by Terrance Malick, before he went into a 20year hiatus only returning in 1998 with the Thin Red Line. The plot, set in 1916, follows Bill (a young Richard Gere), who is on the run with his sister, Linda (Linda Manz), and his new girlfriend m Abby (Brooke Adams), who all end up working for a rich farmer (Sam Shepard), who falls in love with Abby, he mistakenly believes is Bill's sister. After overhearing the farmer is dying Bill pushes Abby into marrying him, and the all live the rich life until Abby begins to develop feelings for the farmer and all leads to disaster.

So the plot is pretty straightforward: Two men, one girl. But the film isn't, it's a complex and beautiful piece born out of remarkable imagery. Filmed almost exclusively at magic hour, which is the first and last hour of sunlight and leaves the sky sunless but with a warm orange glow and leads to enhanced colours. And does the film look luscious. Shot as with epic scope we see the daily life of the farm hands pasted unto this unreal backdrop of multicoloured clouds on a blue sky. The fields them self are golden in colour and stretch on for miles all around. It is almost if Andrew Wyeth's famous painting of Christina's World has come to life, and there is even the far away house on a hill that the farmer lives in. All this makes up the background of the painting. The background is so key that in many scenes are completely backlit with the characters in silhouette. It is setting imbedded in nature. An Eden for where days of Heaven takes place. The warm glow of the skies is both beautiful and ominous however. As it sits above the fields it suggests the fire that is central to the denouement of the piece. For Eden is easily corrupted.

The characters and their actions are equally visual. After a number of days on the shoot Malick throw out the script and let the actors find the story themselves, much in the way Wong Kar-wai does now. However when it came to editing, which itself took two years to do, much of the heavy dialogue was jettisoned and most scenes between characters involve only a couple of lines usually without response and many scenes feature no dialogue. Towards the end there are patches of ten or fifteen minutes with only two lines of diegetic sound spoken. In the painting that makes up Days of Heaven the middle ground would feature Abby kissing the farmer, in he centre of frame. His eyes closed completely in love with her. She on the other hand would have one eye open looking over his shoulder to Bill, her true love. He'd be beckoning her on with one hand, and ready to stab the farmer in the back with the other. Both figuratively and in one very tense scene literally, although its not a knife he has but a gun.

The foreground of our painting is the heart and soul of the film though. Although the love story is what we follow and the landscape is what we look at. The central figure is Linda, the little girl for she is the one we listen to that tells us the story. After cutting the dialogue malick needed a better way to convey the story and so recalled Linda Manz in to record a voice over, but this is no statement of the facts. This is a girl remembering back just talking to you in the streets, she comments on the plot elements but only with a basic understanding of what's going on and instead just remembers the vague elements of people and her own personal experiences, and with a very distinct accent that you can't help but be enamoured by. When we are introduced to the farmer the voice over tells us what she thought of him and for the viewer its all we need to know: This farmer, he had a big spread, and a lot of money. Whoever was sitting in a chair when he'd come around, why they'd stand up and give it to him. Wasn't no harm in him. You'd give him a flower, he'd keep it forever. She is the centerpiece, a little girl that's spending a year rich and in happiness before it goes away. In our painting she'd be smiling back at you and what we see behind her is what she's telling us.

So that's our painting and it contains all the elements a great painting should have: A striking backdrop, a tragic love story, and a central figure who can tell us the entire story in a look. And it contains many of the theme that all art is founded on: Sex, the love triangle; Death, the fateful outcome of the many players; and religion, from the plague of locust, to the hell fire, and the title itself taken from Deuteronomy 11:21: "That your days may be multiplied, and the days of your children, in the land which the Lord swore unto your fathers to give them, as the days of heaven upon the earth." For a blinking moment they lived in a true Eden on earth... And my girlfriend would rather watch Pirates of The Caribbean 3.

Days of Heaven, is out now on DVD and won The Oscar for best Cinematography, The prix de la mise en scene (best direction) at Cannes, and the BAFTA for best music.