We chat to Kate Jenkins, mastermind and crocheter behind Cardigan 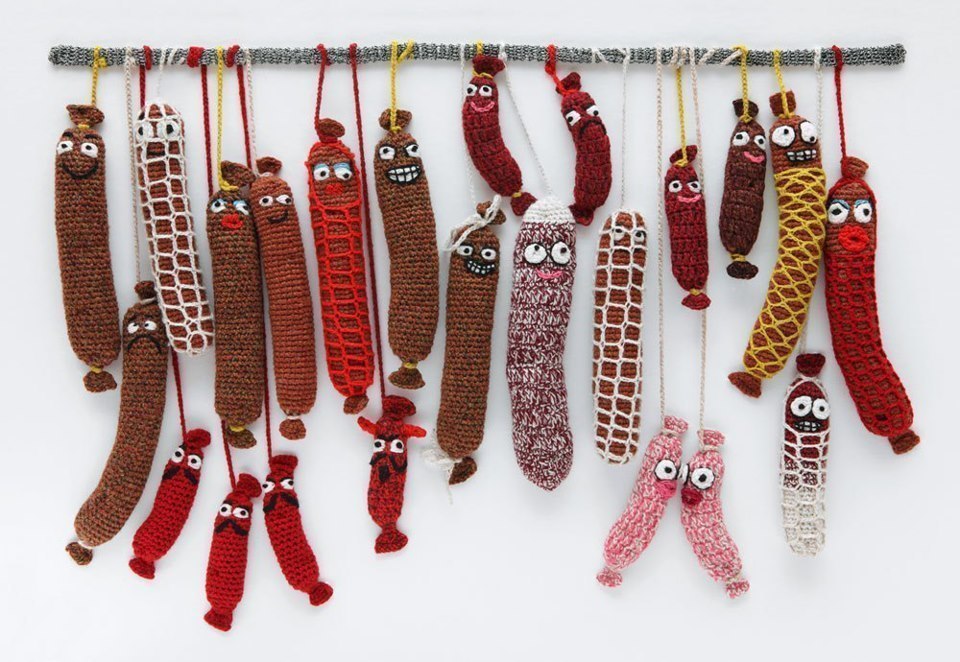 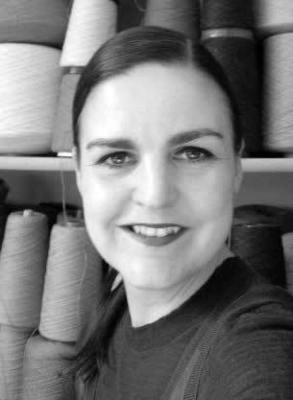 Queen of crochet Kate Jenkins created UK label Cardigan in 2003. Famous for her crochet food and nostalgic pieces, Kate has featured her knitted artwork in London, Brighton and the United States and her work is collected worldwide. In February, Kate will be taking part in the “Eat Your Heart Out” Valentines pop up event in London, where she will be selling her awesome new range of anatomically correct knitted hearts. A decade has passed since starting her own label and we chat to Kate about the story of Cardigan so far, and what the future may hold.

You’ve been described as the Queen of Crochet- how would you describe your style?

I guess I would describe my style of crafts as meticulous crocheted art pieces; re-created food and everyday items made from yarn, sequins and humour. 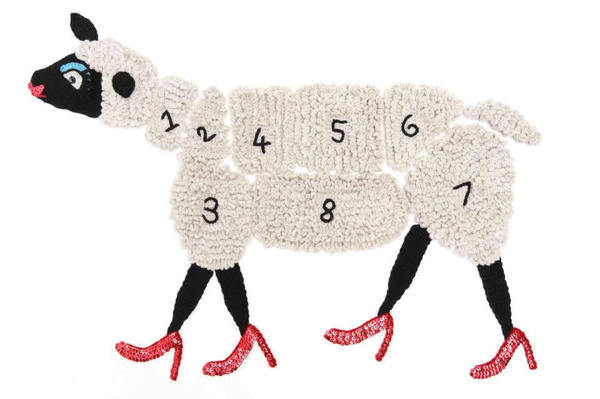 Where did your love of knitting and crochet come from?

I was taught by my mother and grandmother at an early age. I was always encouraged to make things when I was growing up. This continued throughout my teenage years and then on to University level where I completed a degree in fashion textiles with business studies at Brighton University.

Cardigan Ltd started 10 years ago now- When did you first begin designing and selling your own stuff?

When I graduated from college after completing my degree I was approached by several knitwear design agencies. They sold my knitwear designs to various fashion houses (designer and high street). So for quite few years I was designing anonymously as the designers who would buy the designs also owned the copyright to the designs which I created. I did this for many years until setting up my own label. 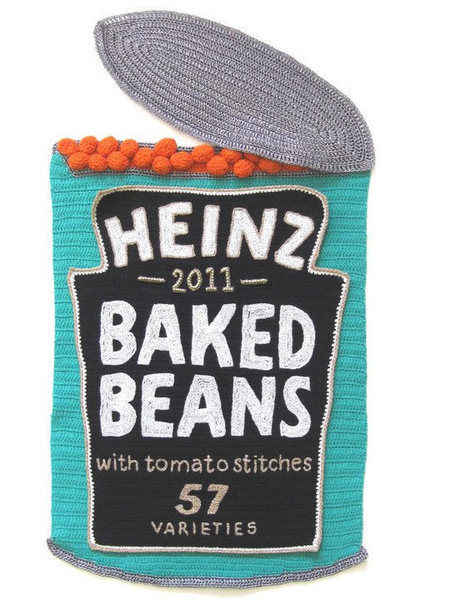 Do you remember the first item you ever sold?

I was about 12 years old and I used to make fimo clay badges and buttons and sell them through various shops in Cardiff when I was still at school. I used to get £1.00 a badge and remember sitting in my mum’s kitchen for hours making all kinds of creations.

What inspired you back then, and has your inspiration changed from then to now?

Although I am inspired by life and things that surround me every day, when I was younger I had (and still have actually) a rather vivid imagination which was always useful when I was thinking of things to do. I wouldn’t say this has really changed over the years, I think I have just become more eccentric in the way I approach my work these days.

How did you go about setting up your own business?

I didn’t really have a plan as such, I was working in a job where I wasn’t really happy and decided I had to make the break and do something with my skills. So I set up Cardigan- originally just selling scarves. Since then the brand has developed and evolved over the years. 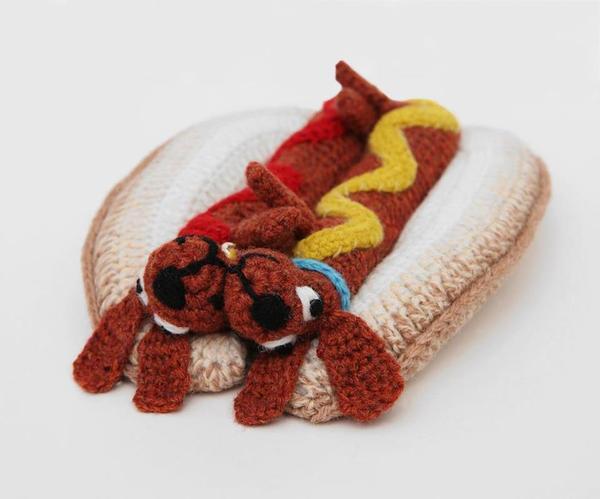 Starting up a new business can be costly- How long did it take you to get out of the red and into the green?

I was always taught to be financially very careful and not to take out huge bank loans to set up my business. I guess it took longer to set things up this way but looking back I’m really pleased I did as I have avoided huge debts and kept the business very stable even through times of recession. 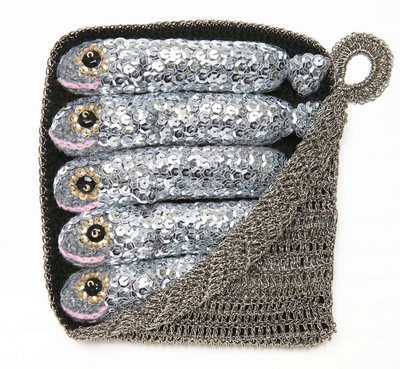 I didn’t have a studio initially; I had a knitting machine set up in the corner of my bedroom in dingy flat in North London. I had moved there shortly after graduating from University and saved up the money to eventually move to a studio in East London - which was great!

Can you talk us through a typical work day for you?

I don’t really have a typical work day; it depends on what projects I am working on at the time. Sometimes I can be designing a scarf pattern or sewing a sequin on to a prawn, other times I can be updating my website or having a meeting with a client. I try and get in each weekday at 8.30 a.m. and leave at around 7.00 p.m.

What's the process for putting together a new piece?

I always start with a sketchbook of notes; I’m not very good at drawing so these books are usually filled with badly drawn sketches of things that inspire or make me laugh or lists of things. I often go out with friends and ask their opinions (mainly my sister who is a very good critic) and then once I have decided what I am doing I just get on with it and start to crochet. I never write any patterns for my work it’s all in my head so often its trial and error when I start to make things. If I am creating an art exhibition (which is usually about 50 new pieces) I allow myself about 10 months to create everything from the initial concept to hanging the frame in the gallery. 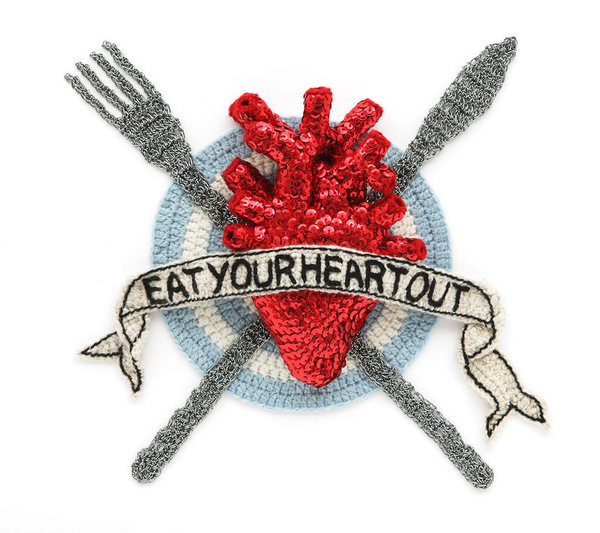 What’s your most favourite piece of work so far?

My favourite piece is always the latest thing I have made as its always a thrill to see something that was an idea in your head being turned into a woollen reality.

You've done some great collaborations, can you tell us who your favourites were and why?

My favourite so far has to be the pop up gallery on the London eye which I did for Champagne Pommery. I was asked to create a crocheted installation in one of the pods for them to launch The Freize Art Fair in 2010. It was the most surreal and exciting thing I have ever done. 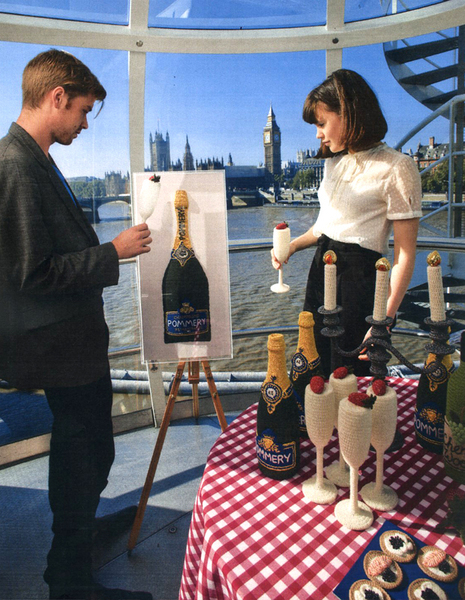 If you had all the time in the world- what would you crochet/knit?

I am still working on that! The world is full of amazing inspiration. I often look at fish markets and think oh wouldn’t it be brilliant to recreate it in crochet. Just think of all those sequins I would need....

What's next for Cardigan- Will you be doing international?

I have just returned from New York where I had my first solo show of crocheted art entitled “Kate’s Diner” so yes - there are definite plans in the pipeline to go International.... I can’t give too much away just yet but I think Paris is calling in 2013.......

How exciting! And finally- Do you have any words of wisdom for someone wanting to start their own craft business?

Just be original and work HARD.

For more information on Kate and her artwork, visit the Cardigan Ltd website »

DarkAshHurts
“Wow that's amazing! I thought everything on the wine table was real. Lmao” 3rd April 2013