Go back in time with Flapper Girl Lady Ties 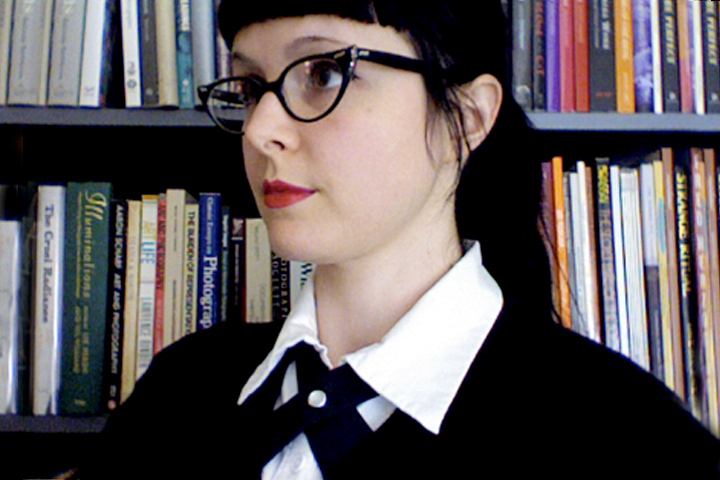 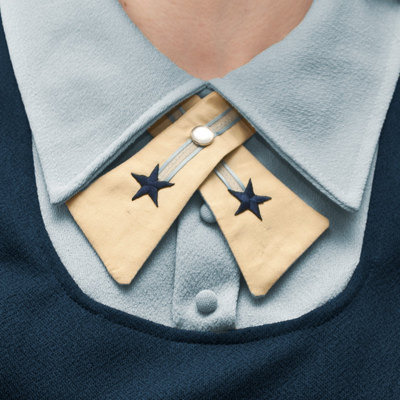 We've got three Lady Ties to give away and for your chance of winning a tie of your choice, just leave a comment below telling us which retro fashion you'd love to bring back.

The origins of Flapper Girl Lady Ties can be traced back to the Chrysler Building, Fritz Lang’s Metropolis and a bad case of procrastination. It was May 2011, and I was writing a term paper for my History of Graphic Design class at Portland State University. “Choose something or someone you feel a connection with,” my professor instructed us. For me, it was a no-brainer. The Chrysler Building is a gorgeous work of art that I have always admired—and I was excited to learn more about how German expressionism, early car culture, and the art deco movement influenced its design.

In the middle of my research, lost in the eye candy of one of my favorite decades, I got sidetracked by all the amazing fashion of the 1920s. I love all the flappers of the era, and while looking at old photos of Marlene Dietrich, I thought to myself, ‘Oh my goodness! I forgot how sexy and cool Marlene Dietrich looked in her neck ties!’ 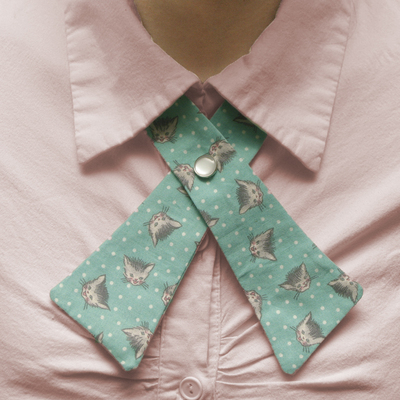 Now I realize that Miss Dietrich is technically a 1930s icon, but I think she embodies the sass, sexiness and overall bad-ass attitude that the flappers were known for. I wanted to capture that essence for myself, and for me, it was all about that neck tie. I knew I couldn’t pull off Dietrich’s signature bow tie, or the long neckties other flappers were wearing in the photos I was admiring while I was supposed to be writing my term paper. No, I was envisioning something else for myself—a sleek continental-style neck tie.

My friend Elide urged me to sew some ties for myself, so I drafted a pattern and gave it a go. I made my first two Lady Tie prototypes in seafoam green and a gray and blue plaid. I was so excited with the results, I immediately became obsessed with making ties. I couldn’t wait to wade through my fabric stash, selecting prints that I knew would make lovely additions to my new Lady Tie collection. 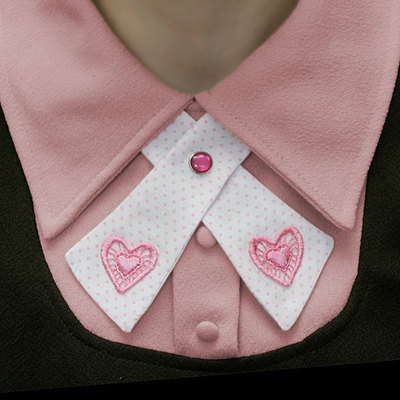 I wore my Lady Ties to my summer job at a cute local boutique and strangers kept asking about them. I posted photos of my Lady Ties to my blog, and my blog friends were excited about them too. I decided to share my inner Marlene Dietrich with the rest of the world and made a small batch of Lady Ties to put in my Etsy shop. The rest, as they say, is history.

Since September 2011, I have sent over 300 Lady Ties all across the globe. It makes me so happy to think about so many women wearing these fashion accessories that are made with my own two hands. The enthusiasm I receive from women who find my Lady Ties on Etsy continues to fuel my obsession, and the collection of Lady Ties in my shop continues to grow. I’m still blown away by all the love and support I’ve received in this little endeavor of mine, and I try to send back a little bit of that love in every package I send out into the world. Lady Ties are all about the love and sass—I want women to feel powerful and gorgeous, just like Marlene Dietrich.

susie
“I think one of the great things about living in the 21st century is that nothing is off limits fashion wise, I used to get picked on for some of my fashion choices that seemed strange to others when I was growing up and now I love seeing true individuals walking around the city free from prejudice.
I'm very lucky that my favourite 90s fashions are coming back anyway. Short, flowery dresses, doc martins and chokers, how my big sister used to dress!” 22nd August 2013

Grace O.
“I really love the swimsuits of the 1940's. A women can feel confident while still still looking great.” 29th July 2013

Miss Monstro
“Flapper dresses would be an awesome bring back ... I have a vintage one somewhere!” 15th May 2013

Chocolate
“I'd bring back regency era empire waistline dresses made from soft, light muslin. Every time I was Pride and Prejudice I can't help but be jealous of how fantastic the dresses look as a means of keeping cool in the summer while still protecting legs from sunburns.” 6th May 2013

Joe W.
“would love to see ZOOT SUITS come back into fashion.
who doesn't love the old gangster style fashion or as jim carey said in mask
SSSSSSSSSSSSSSSSMOKIN' !!!” 1st May 2013

Julia W.
“I'd love to have the atomic prints brought back; and the vintage kitchen clocks in their pastel colors.” 28th April 2013

Laura
“I'd love to see circle skirts more, I truly love them and how something so simple can be very beautiful.” 27th April 2013

SugarNSpiceLily
“Bell Bottom Jeans. All we have now are skinny jeans and boot cut pants. The flare pants we have today aren't big enough at the bottoms. I have a friend who can turn a pair of flares into a vintage-style pair of bell bottoms. Those are what we need. Oh, and I wasn't around when the first waves of the Bell Bottoms' popularity hit. However, I was there wearing later versions in the late '90's. ;)” 19th April 2013

Felecity W.
“I would love to see spats make a comeback, Spats are the legging type things that covered ladies boots around the 20th century and kept them clean of mud and such. I think Spats would be really cool when paired with leggings and boots. ” 10th April 2013

VeganSprinkles
“I would love to get lace back in style! There were elegant lace gloves, lace on hats, lace trimmings on skirts, lace on the shoes. It was all so beautiful and feminine and somehow, the lace got lost! I would love some really lavish, lacey accessories back!” 27th March 2013

Blackdoll
“The retro fashion I would adore to see coming back.... CORSETS !
Beautiful, delicate or rockish, they help women being more feminine as well as giving them a lot of self confidence. You can wear them for any occasion, and you'll definitely turn heads !” 24th March 2013

craftiequeen2000
“The retro fashion I would love to bring out is the poodle skirt. Some may thinks it's out-dated, but if we shortened them, women all of the world would snatch them up!” 24th March 2013

Princess Pam-attitude
“Cat Eye Glasses! My mom has a pair my grandma wore and the are so awesome looking. They're black with a curly ivy design carved onto them. I always want to dress up in them when I was younger and even tried to wear them to school a few times. It didn't work out well because I don't need glasses and the prescription on them was quite thick lol.” 22nd March 2013

Whimsy and Noir (Ghoulie Gaby)
“I've always loved the fashion and styles from the 1940's.. The silhouettes were very flattering on all body shapes! ” 20th March 2013

Mary_Rebecca
“I wish millinery would become more popular again with the 20-30 yr old crowd. I want to wear hats and fascinators like they did in the 1920's

Mary_Rebecca
“I wish millinery would become more popular again with the 20-30 yr old crowd. I want to wear hats and fascinators like they did in the 1920's

Sandra L.
“I think bringing back the poodle skirt would be so much fun!” 17th March 2013

Blue Eyed Night Owl
“I really enjoyed reading how you got started! This was a wonderful article<3

What I'd like to bring back are elegant pants. I know there were some amazing pairs back in the day, but all we get now are skinnies. Oh, and petticoats!” 17th March 2013

Lucky Threadneedle
“HATS. Without a doubt. I would bring back the days when no-one would leave the house without a hat. Big hats or little hats. I would happily have one for every occasion!” 16th March 2013

MischievousRaven
“i would bring back jersey dresses, they may be old fashioned but i like them” 16th March 2013

typicalninetieschild
“I love Christine and her amazing Lady Ties!

For me it would have to be 40's swing dresses

Olivia H.
“Out of all the great retro fashion options, I'd definitely choose to bring back saddle shoes. They'd pair well with anything, not to mention the fact that they're beyond adorable!” 15th March 2013

MikisScrapbook
“I love her lady ties! I have a kitty one and everybody keeps giving compliments on it ;).

As for the question, I'd love to bring back gaiters for both men and women!

Kat_Cupcake
“I would bring back seamed stockings. They're a simple accessory but add a lot of sass and sexiness to an outfit. There's just something about those lines: they elongate your legs and draw attention too them. I think seamed stockings are a vintage fashion that would benefit a lot of women.” 15th March 2013

EmmaThePrincess
“Oh, what a tricky question. I want more fluffy skirts in general but retro fashion to bring back? Hm. Gloves would be cool. Basic white gloves for the ladies.They always look so innocent and ladylike and give the wearer a sense of privacy. But I'd bring them back in my size because I have too long fingers to fit in "normal" lady gloves.” 15th March 2013