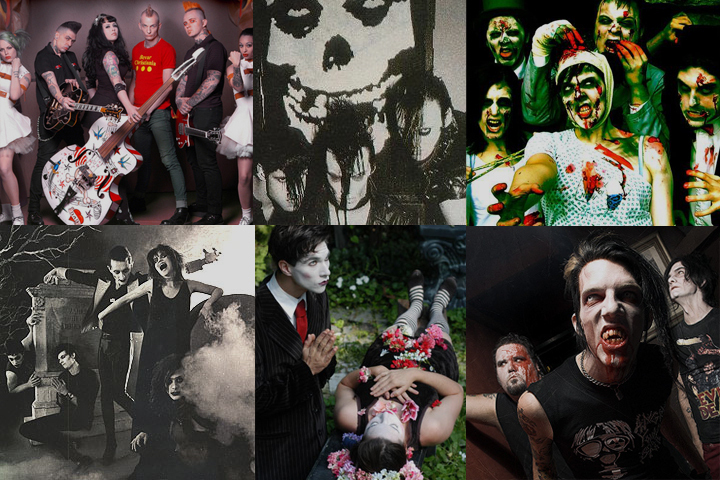 
Ah… it's that time of the year again when all things horror and macabre come to life to scare the living day lights out of the ordinary folk. However, Halloween parties are one of the best ways to have a fun time and have a night to remember. From grave robbing and death to down right spooky, these Halloween party anthems are sure to give you Halloween loves a warmth chill down your spine!

The kings of horror punk just axed their way to the number one spot. With Misfits horror filled lyrics, clean cut devil hawks and campy fun “Scream” is probably one of the songs that you don’t want to forget at a frightening Halloween party.

With lyrics dark and morbid but yet sinisterly catchy “Voices Of The Dead” will certainly get the crowd into full swing and in the spirit of all things creepy.

Pyschobiily is alive and well, so get your best brothel creepers out, sing along in a tongue in cheek mannerism and sway to this zombie feasting little number.

For all those Michael Myers fans out there you can certainly slash your way through this track as the almighty lords of death metal, Cannibal Corpse will torture anything in sight.

Wednesday 13 and Joey Jordison getting together to give birth to what is Murderdolls was probably one of the best things that has happened in the horror scene. Murderdolls music certainly expresses everything that fans of horror and all things scary crave.

6. Blitzkid - Let’s Go To The Cemetery

Blitzkid are one of those bands that just craft necrophilia, grave robbing and cemeteries into their sound and do it with entertaining terror.

If you’re the Red Queen on Halloween and screaming “Off with their heads” then this song is definitely your cup of tea.

It’s industrial metal with a disturbing twist and the only man who can do that without it sounding drowned out is Rob Zombie. From being the front man of White Zombie to directing horror films, Rob Zombie will get us all demon speeding by the time Halloween is over.

Giving the death rock scene a push further into the dark 45 Grave and other bands such as Christian Death have made death rock one the scariest and sinister genres around.

Last but not least, it’s the cabaret duo The Dresden Dolls, who have made the world play a part in their wonderful yet daring cabaret musical. However “Slide” is so terrifyingly dark that it will have you the edge of your seat.

What are your favorite Halloween party anthems?

SharieCrimson
“I love this.
I'd probably add some Stellar Corpses, Helena by Misfits, Halloween by Misfits or AFI or maybe both, Calabrese has great songs I'd add Blood in my Eyes and Incorporeal by Tiger Army” 4th September 2012

numis
“could be a daily playlist for me

Ms. Wendy 13
“Its great to see Calabrese and Blitzkid on here, both have amazing year-round spookiness! :]” 17th October 2010

CO+K User
“Great list indeed. Half of my psychobilly collection should do it when I'd give a party with a bit metal.” 8th October 2010