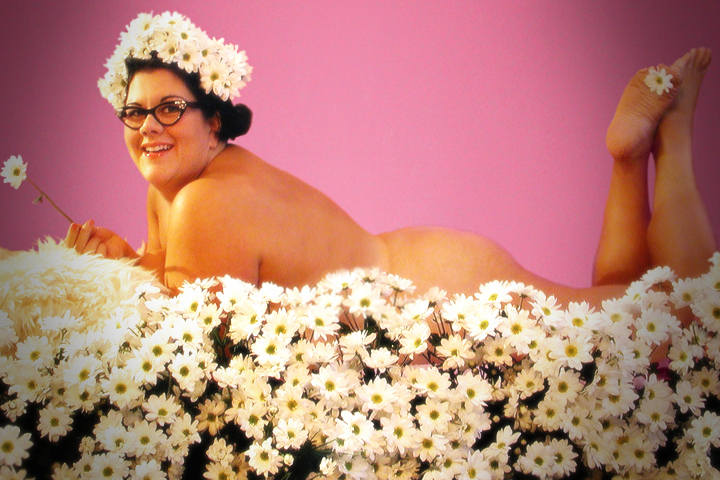 
If you've ever come in from a night out and channel hopped through British television, then you'll have no doubt cast your drunken eyes on the lovely and talented, Amy Lamé. This media darling is a writer, presenter and comedian, with a unique and iconic look. We caught up with Miss Lamé to discuss her super busy career, pom poms, and her love for London.

Amy on London: "it's the best city in the world."

Born in America and raised in New Jersey, Amy has lived in Britain for over 16 years. "I came to london in 1992 and it has certainly changed a lot!! Back in '92 there was a Tory government, there were no Starbucks and bus fare was 35 pence. I was so excited and enthralled by London when i first arrived- it was a city where anything could happen, a city full of crazy arty people from all over the globe. I wanted to be a part of that. London still has that energy- it's the best city in the world." She ponders her favorite hang-outs. "The Vauxhall Tavern, every Saturday night...obviously! It's where I've been hosting my club, Duckie, for 12 years. Maison Bertaux in Soho is my office away from home, and their coffee and Dijon slice is dee-lish! My local pub, The Town of Ramsgate in Wapping is great for a nightcap. And I seem to spend a heck of a lot of time chatting and crocheting at I Knit London, my friend Gerard's shop in Waterloo- it's also where my project Pom Pom International is based."

In 1995, Amy started up Duckie, a gay and lesbian club night that she still runs today in south London. "My friend Simon and I were sick and tired of the "happy handbag house" clubs on the gay scene and there was nowhere we wanted to go out on a Saturday night. So instead of inviting all our friends to drink and dance in our front room to Grace Jones, David Bowie, Blur and the Smiths, we decided to do it in the Royal Vauxhall Tavern instead. It saves on the cleaning up, that's for sure! We got our friends, DJ's The Readers Wifes on board, and our door whores J Cloth and Father Cloth. We've been the same happy band for a dozen years now."

"I never wanted to be on stage- it's just something that happened, and something I never expected. I dropped out of the school play when I was 8 because I didn't want to wear a leotard on stage! My first time on stage was here in London, at the ICA in 1994. Now, I just roll with it - yes there are times I'm nervous, but that energy is good- it keeps me on my toes!" she explains, on keeping her calm in front of an audience. Lamé has produced her own stage show, which is loosely based on her own life, titled The Mama Cass Family Singers. "It's the story of how I was a child star in America, how it happened, why it happened, and the family fallout as a result. It's a twisted show, full of fact and fiction which the audience have to make out for themselves. My family star in it alongside me, though they are on film. There's no way I could get them to be in one room at the same time- they'd kill each other!"

"I am officially the second best air hostess in the country... what an accolade."

From the stage to the screen, Lamé is active in all areas of the media. "I've just finished CelebAir, a reality show for ITV2 in which I trained as cabin crew and ground staff. I worked my ass off in Gatwick airport for 3 months flying the friendly skies. It was an incredible experience, but I don't think I'll be having a career change. Getting up at 3am to fly to Tenerife and back isn't easy... I did manage to make it to the final of the show, and came in second. So I am officially the second best air hostess in the country...what an accolade!" Her other famous TV stint was in Celebrity Fit Club. "I lost 4 stone, so yes it had a positive impact on my life. I am much healthier, and no doubt avoided all sorts of problems like diabetes and heart disease. It also gave me the impetus to stop smoking which is the best thing I've ever done."

Describing her look, Amy explains "My style is just me - it's certainly not fashion. I've never had a stylist - I choose all my own clothes and accessories. I treat every day like a great dressing up opportunity. I love 50's and 60's style, wear only vintage specs from a specialty shop in NYC, buy a mix of high street and designer and charity shop clothes, and am always on the lookout for unusual jewellery and accessories. I especially love the designer Anna Scholz, and anything from Tatty Devine. I have a gem of a source of vintage stuff from the most amazing shop, Revival, in Accrington. Plus I crochet my own fabulous fripperies!".

As well as her television career, Amy is a talented writer, having worked for numerous British papers. "I have always written - I write all my one woman shows, and turning to print journalism seemed a natural progression from tv and radio broadcasting. I've done all sorts of articles, from opinion pieces, interviewing big name celebs, but these days most of my writing is for the travel pages! It's a dream job... I haven't written any guides yet, I'd love to! Last year I went on a polar bear expedition in the Arctic - definitely the most amazing travel experience I've had so far. It's hard to top seeing polar bears in the wild, just 4 metres away. I've just had an article published in the Times where I went back to my home state of New Jersey to see it through nostalgic eyes - and supermodel turned photographer Helena Christensen took the photos. It was pretty amazing to have her sit on my mom's sofa and share a glass of iced tea!... I'm working on a foodie travelogue....expect some classic diner food recipes!

Turning the subject to crafting, Amy confesses, "I desperately wanted to knit, crochet, cross stitch, and do all sorts of craft as a kid, but my mom just wasn't crafty and never encouraged me. My great grandmother crocheted, with fine needle-like steel hooks- luckily I have inherited her skill as well as her collection of fine doilies! I started crocheting about 2 years ago. At first I tried knitting but I didn't like it. It just doesn't suit my personality. I like the freedom of crochet, the "anything can happen" aspect. I love doing freeform bits that wind up looking like blobs or bits of slime or rejects of nature. I also do a great line of capelets- I've crocheted the same pattern in a rainbow of colours so I have one to match each outfit!"

"Anyone can make a pom pom at home, download an ID tag from the website and send it in to Pom Pom International HQ- www.pompominternational.com"

Amy's latest campaign, Pom Pom International aims to promote world piece through pom pom making. "Together, we create whimsical, non-political, creative balls of fluffy yarn in a gesture of friendship and reconciliation. All pom poms are tagged with the creator's details and a message for peace, and will go on to make the biggest pom pom in the world. It's all about creativity, conversation, and reflection- three things that modern day society desperately needs!. It started as a simple love of pom poms, and I started thinking about what they could embody, what they symbolise. Pom poms are unique in that they are a craft ANYONE can do, they appear in national dress in countries across the globe, so are universally recognised yet not political in any way. They make people smile- they're silly, tactile, and fun- and take people back to a simpler time of childhood. They break down barriers, and encourage participation and conversation. Pom poms are the unlikely yet ultimate symbol of global harmony for the 21st century!"

"I thrive off diverstiy and creativity, and life just seems too exciting to just do one thing. I want to try and do and make and experience so much- I just hope I don't die young!"

Crafters, the world over, have picked up yarn and wrapped their way to world piece as a part of Amy's campaign. "The project has grown beyond my imagination- and it's been going just about a year now. I've done dozens of events, from the Crafts Council's ORIGIN to the London Lesbian and Gay film festival, to a tour of Northern Ireland for the 10th anniversary of the Peace Agreement. The award winning film director Kristiene Clark has made a short film about the Northern Ireland tour. I have some pretty exciting plans for the future, too My collection runs to several thousand pom poms at the moment, and i've been working with the artist Shane Waltener to give the pom poms life before they go on to be part of the world's biggest pom pom. Pom poms are the future!"

Looking to the future, Amy concludes, "Well, Pom Pom International is going strong- i'm just about to put my pom pom making kits for sale in a few shops and boutiques here in London. I'm still touring my one woman show, am off to LA and China for travel features for the Times, carry on doing the afternoon radio show with Danny Baker on BBC London 94.9, still hosting Duckie every Saturday night, keep going with the book, and hope another super duper TV job comes my way. Life is fabulous and extraordinary and i'm savouring every moment!!!"

You can find out more about Amy on her website, or join her campaign at Pom Pom International. (Photography by Bryon Fear & Leif Harmsen).

Amy Lamé
“hey roma thought you'd like to know the photo of me lying in the bed of daisies is a remake by the British photographer Bryon Fear of an original image taken of Mama Cass Elliot by the American photographer Jerry Schatzberg, who snapped the great & good of the music & showbiz world in the 60's and 70's, won the Palme d'Or in 1973 for the film Scarecrow and is still working as a photographer now. www.jerryschatzberg.com