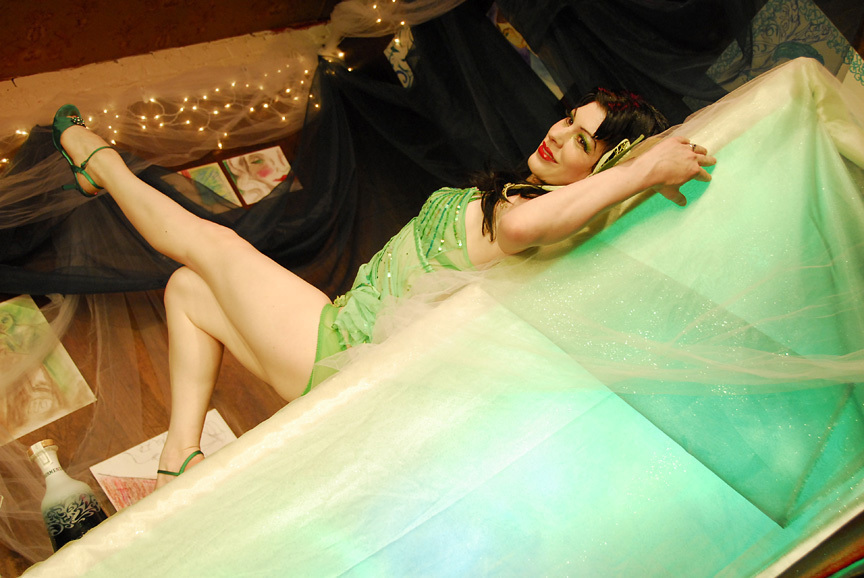 
No one imagines her hobby is going to take over the world... but mine did.

We're built on a few principles.

When I was twenty-two, some friends and I founded Dr. Sketchy's Anti-Art School. I had just dropped out of college, and was eking out a living as an artists model. During those grey hours posing, I got the idea to combine my passions.

Posing for art class is a sterile affair. You stand silently. People sketch you. The room is bright and cold. It's about education rather than excitement. But I didn't find those things mutually exclusive. I wanted to take the learning and combine it with the glittering personas of New York's burlesque underworld (where I often shimmied as a dancer).

Together with some art school companions, we pleaded our case to a local bar. Within a month, burlesque clown Dottie Lux posed for a tiny crowd of artists, and what would become an international phenomenon was born.

As of 2008, Dr. Sketchy's is the largest chain of alterative life drawing classes in the world. Our attendees wield their pens in 57 cities - including Hollywood, London, Rome, Paris, Tokyo, and Melbourne. We've spawned a book, calendar, merch line, jewelry, US and European tours, gallery shows, museum lectures, comedic YouTube shorts, and a show at the Edinburgh Fringe Festival. A documentary is in the works.

The Internet took Dr. Sketchy's from an NYC niche event to an international art community. When we started, I hawked Dr. Sketchy's on Livejournal. Artists from around the world emailed me to ask why cool things never happened in their town. Inspired by National Novel Writing Month and the Craft Mafia, I asked the same question. Two weeks and one posted tutorial later, Dr. Sketchy's had opened its first two branches.

From there, the event went viral. A branch in Sydney would hire a German model, who would later return home to found a Dr. Sketchy's in his city. A BoingBoing mention or NPR story inspired branches in Indianapolis and Anchorage. Sketchy's appealed to every town- from Rome to Red State USA. I scored a book deal and toured the country, with the resulting press coverage inspiring scads of Sketchy action.

As a parting gift, I'm offering my top tips to make your own event go viral:

Find out more about Dr Sketchy or find a class near you on the Dr Sketchy website.