A retrospective look at a decade in music with singer and songwriter, Brian Molko, from Placebo. 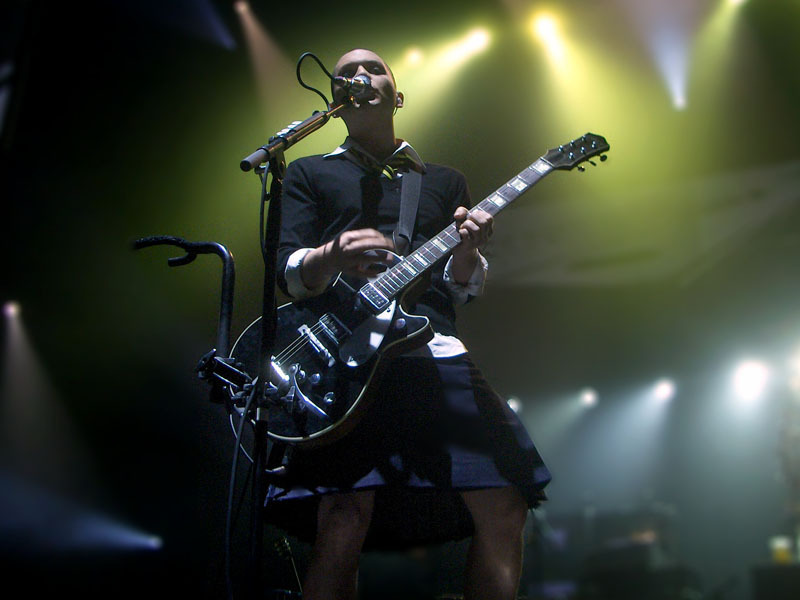 It's a rainy winter night in Glasgow, Scotland and Brian Molko is sitting in a cold backstage dressing room before his concert with band, Placebo, later in the evening. He nurses a can of Red Bull and puffs eagerly on a cigarette, in an attempt to stay warm. "I'm just glad that we're still around. The fact that we've survived when so many of our contemporaries have evaporated and disappeared. If there is any significance to a ten year anniversary, it's simply a product of the metric system. If there is any significance, it's simply a case of survival and of remaining vital and watching the fan base grow, often with amazement."

Earlier this year, Placebo re-released their debut self-titled album, with new tracks and a DVD to mark its 10th anniversary. "I have no idea what ten years feels like, it's really difficult to judge, you just wake up every day and do what you have to do". Molko ponders for a few moments. "Highlights have been getting endorsed by your heroes. The best endorsement is working with them. Getting to perform with them or recording with them, which has happened a lot to us. I'm still amazed. Every artist, unless they're Noel Gallagher, has a little voice in the back of their head telling them they're shit. When people who you've grown up listening to actually start working with you, it makes that voice a lot quieter for a little while, which is a fine source of release."

When the band formed in London in 1994, they were revered for their interesting style and their unique sound. Many bands of the time failed even to release second albums, Molko believes that their survival is down to "a complete disregard for movements and trends in music.

We've held what's fashionable in music with great disdain for a long time, we've often purposely tried to be unfashionable. What was hip when you were in the studio, will be unhip by the time you get out. We've stuck to our instinctual way of working. Making music in a vacuum and staying true to our singular vision. I truly believe that a singularity in vision is all that allows you to survive".

Placebo have toured all over the world this year and have huge fan bases in Europe, Japan, and Australia. They put their global success down to "not having a necessarily British identity and having a kind of European identity as a band. There's a certain arrogance to bands that have a particularly British identity, in the way that they feel like they come from the place that invented music. There is this swagger and arrogance, it's almost as if the world owes them a living, which is absolute nonsense and I don't think that we've ever had that attitude. We've always understood that it's not our god given right to be listened to, so we've done our best to travel and try to steal people's hearts."

Molko and the band have had a rocky history with the British charts. In 2000, the band's thirteenth single, "Special K," wasn't allowed to chart due to it's drug references. Commenting on what relevance the charts have to music today, Molko debates, "I think they will become less and less important. It's a process of self discovery that's becoming much more important. How people discover music today on the internet, is similar to the way that people use to at the birth of indie and alternative, in tiny record shops. There's thousands and thousands of niches and you can find anything anywhere."

Some of Molko's favorite bands from today's music scene include Autolux, Mogwai, the Gossip, CSS and Bonnie Prince Charlie. "Music is as good and as bad as it's always been. The reason that we have this nostalgic idea that music was better decades ago is simply because, historically, all the shit gets written out of the history books. And when you look back at the '60s, '70s, '80s and '90s, you just remember the good stuff. You remember Janice Joplin from the '60s, but you don't remember the Incredible String Band. You remember all the good disco and you forget all of the shit disco."

Molko hopes that he will still be making music in ten years time. "I'm completely unemployable, so this is all I've got really." A number of earlier singles, such as "Nancy Boy," have become cult classics for the band. Molko discusses whether the music that Placebo is making today will have the same impact in a decade's time. "I don't really think it's that important. I don't really think songs that you write in the middle of your career can have as much cult impact as songs you write at the beginning. I'm more interested in writing music that is timeless, rather than writing cult classics. I'm more interested in the on going process of creation."

In a final reflection on his years in Placebo, Molko declares "It's been the best thing and worst thing that has ever happened to me and I'm glad about it. I've experienced the most amazing highs and most terrifying lows. It's saved me from having to get a real job, or having to wake up in the same place for a long period of time." As well as producing five albums, a best-of compilation, and twenty-five singles, Molko has also become a father this decade. He refers to the band as a "side project" for the moment, to his son, Cody. Looking to the future, he reveals "I do have a title for the next album, but I don't have any songs for it yet" and contradicting online statements, there is no planned released date. He concludes, "It amazes me that someone has posted something that I haven't even thought about. Thanks for telling me when my album's going to comes out, Wikipedia."

For the latest information on Placebo, check out their website.