We chat with Jennifer Perkins. 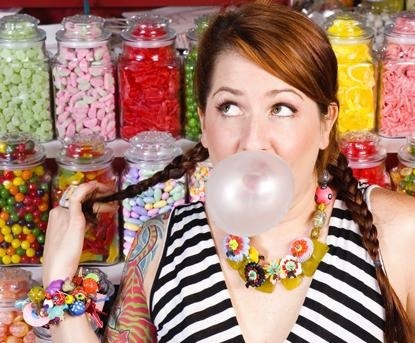 
When did you first start crafting and what was the first thing you can remember making?
I come from a long line of Crafters. I have one grandmother who had a kiln and wheel in her house and another one who had so many crocheted afghans around from her handy work no one in Illinois needed to be cold. Both grandmothers as well as my mother always encouraged me to be crafty. I was also one of those kids that was what you might call "hyperactive". I would go to slumber parties and the entertainment would be to make me drink Coke just to watch me bounce off the walls from the sugar. That being said, I was never big on just sitting still and watching TV. The same is true as an adult. I constantly have to be doing something at all times, most times juggling more than one thing. When I was a child that often involved making things. Sometimes it was cooking, I enjoyed trying my hand at floral arranging using my mothers gardens and there was always some sort of craft kit going at the house. I was big on making stained glass with kits and Barbie perfume.

Where did the idea and name for the Naughty Secretary Club come from?
Actually I was going to name the website "Fire in Cairo" after The Cure song, but that was taken. At the time I started Naughty Secretary Club I was an executive administrative assistant to business and government relations. I occasionally answered a phone or two and sometimes even made copies and coffee, but majority of my time was spent playing on the internet at work. I was indeed a naughty secretary. I just added the club part and the rest is history!

You do so many different crafts including jewelry design, fashion and sewing. Which is your favorite to do?
Definitely jewelry design. I would say that I can sew, rather than I sew. As far as fashion my involvement in Stitch and obsession with fashion trends is about as far as my skill level goes there. Jewelry is one of those hobbies I remember doing since childhood. It came back to me after college when my husband, who was just a boyfriend at the time, was in 3 bands. That is a lot of band practice so I had a lot of free time on my hands. I started to get really into jewelry making again, mostly beading. One day my mother suggested I play with resin. Casted resin jewelry is how Naughty Secretary Club got it's start in the jewelry world. I have since phased it out, but will always have a soft spot for it. Jewelry will always be my true crafty love.

What are some of the strangest and most iconic projects that you have created?
I have made a lot of whacky pieces in my time, it is kind of what I am known for. My sister just this weekend was wearing a pair of earrings I made out of fishing lures. My favorite necklace involves a 3" tall vintage baby rattle with a monkey on it. A charm necklace I regret selling had small vintage chicks that were cupcakes toppers and yellow plastic gun charms. I love using unusual pieces for my jewelry. I always want my pieces to make people do a double take.

Where do all of your great ideas come from and where do you look for inspiration when in need?
I get inspiration from everything and am constantly carrying a journal to sketch ideas, saving Flickr pictures to my favorites, tearing things out of magazines, looking at fabrics for color combinations. I think that is what is key for me. I don't just open up Vogue and go, I want to be inspired. I keep my eyes peeled everywhere to get ideas.

You started off on your own, has the team expanded?
My team has expanded in a couple of different ways. When I started Naughty Secretary Club I only sold the jewelry I made. Now you can find hand painted purses by my sister Hope Perkins who does Hot Pink Pistol and Vintage Barkcloth goodies by my mother Fredda Perkins. In another way Naughty Secretary Club has expanded now that I have assistants. Currently I work with a crafty artist named Travis Nichols who has his own web site ilikeapplejuice.com. There have been times where I have had two assistants at once, but I am waiting to get my garaged closed in for a new and expanded studio space before I hire another second person. Having help to put together orders and handle emails is awesome, however having someone in your house and office everyday can be a little disconcerting so that is why I am moving my office into the garage and out of the master bedroom.

You have so many projects - craft lab, the naughty secretary club, how do you keep organized and find the time to fit everything in?
Don't forget The Stitch fashion Show and Guerilla Craft Bazaar and the Austin Craft Mafia! It is hard to keep everything organized and straight and honestly I am not that great at it. I somehow manage to get everything done, but it is usually by the skin of my teeth. Lucky for me a lot of the things that keep me busy are really seasonal. Naughty Secretary Club is obviously all the time, but Stitch only happens in the fall. So in November I am obsessed with Stitch and over Craft Lab. In August I am living in Los Angeles for 6 weeks at a time to film seasons of Craft Lab so that is what I am obsessed with then. If it all happened at the same time, it might kill me.

Was it an intimidating decision to start your own business and what advice would you give to other craft entrepreneur thinking of doing the same?
It was totally intimidating at the time, but now I tell people all the time to just do it. When I have young friends who don't have kids or something to think about taking care of and hate their job and have a passion for crafts my logic is always well go out and try doing what you love, if it doesn't work out there are a million other jobs like this one that you hate that you can come back to in order to pay the rent. In my case I did not just go "today I am going to quit my job and make jewelry full time". When I quit my job I was at the point where I was making as much money from my jewelry company as I was being an administrative assistant. I wanted to make sure my business was going to actually be able to pay the bills for me before I as they say "quit my day job". I had also really done my research. I read everything I could get my hands on about running and marketing a company. I met up with other crafty ladies in the Austin Craft Mafia and Austin Babes in Business group regularly to discuss ideas with similar minded entrepreneurs. In other words there is always that bit of a leap of faith when you start your own company, but you should be prepared to really work when you do it.

What have been the hardest parts to getting where you are now and which were your luckiest breaks?
The hardest part has also been the best part, having my business grow. Now I have book keepers, lawyers, accountants and more. These are all awesome growing pains to have, but at the same time they don't call them pains for nothing. I have been so lucky and blessed in the big breaks department it is really insane. There was the feature in Bust magazine that really pushed me over the edge on quitting my day job. There was a feature on big bold jewelry in Teen Vogue that really exposed me to lots of press and people. There was meeting Vickie Howell who is set up the Austin Craft Mafia TV show Stylelicious, which from that I got hired to host Craft Lab. Sometimes I want to pinch myself with all the luck I have gotten.

What's next for you? Worldwide domination through craft?
Well as if I did not have enough going on I have also recently joined in the ETSY revolution and am selling craft supplies at www.naughtysecretaryclub.etsy.com. I have more beads, buttons and baubles than I will ever use so I figured I would share the wealth. Expect a Naughty Secretary Club book in about a year, all kinds of fun jewelry projects. The Austin Craft Mafia is working on a book, and Stitch is even kicking around the idea. The Craft Mafia as a nationwide whole is about to start doing some new and exciting things. There are over 30 branches around the country and we are about to start pooling our dues money for ads, having a blog, a shopping option at craftmafia.com and more. I just happen to love crafts and the entrepreneurial spirit at the same time!

To find out more about Jennifer Perkins and the Naughty Secretary Club, visit the website.