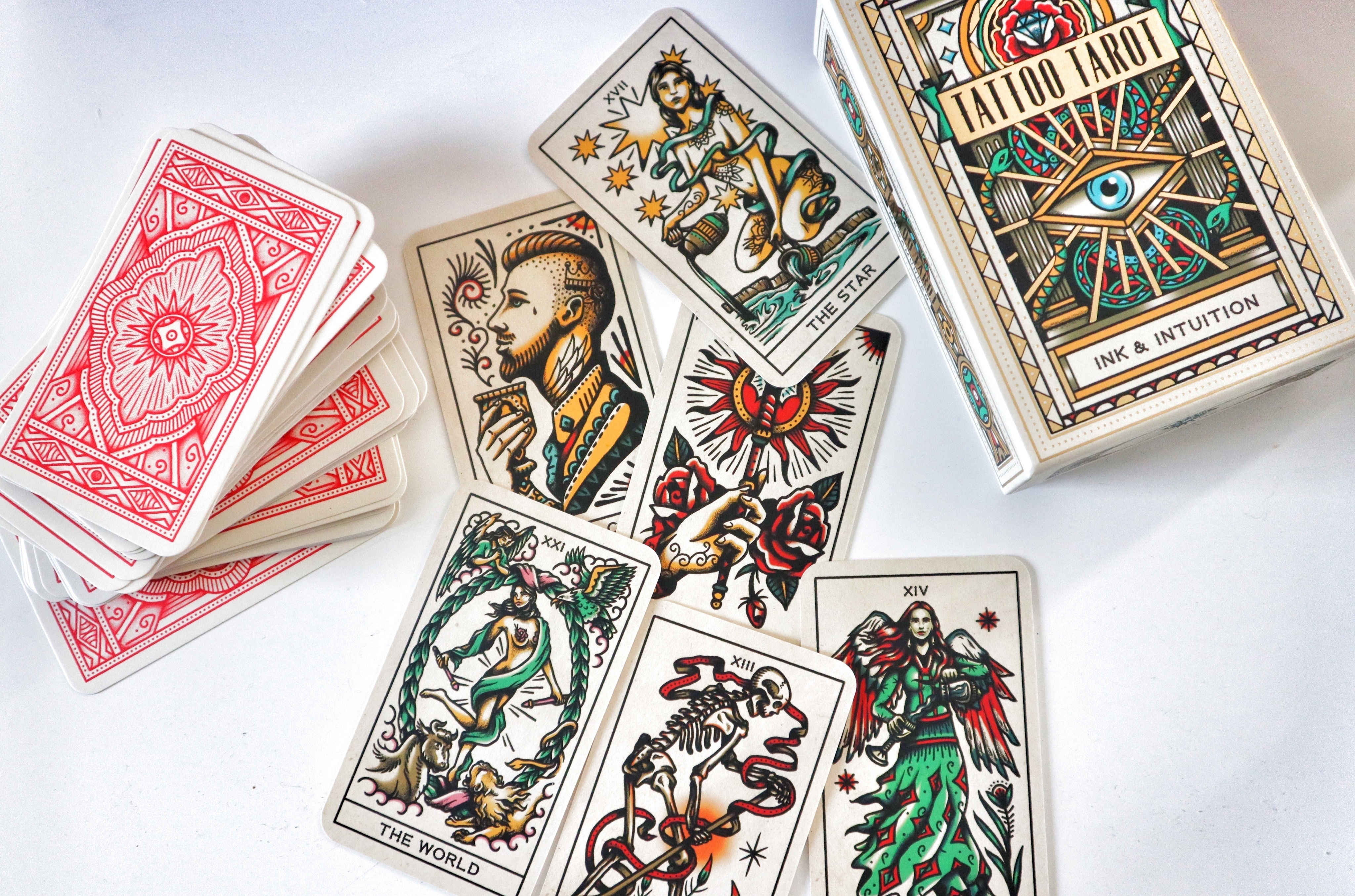 
Tattoo Tarot is a gorgeous deck of 78 tattoo-inspired tarot cards illustrated by MEGAMUNDEN and to celebrate Halloween, we've got three packs to give away to lucky winners. 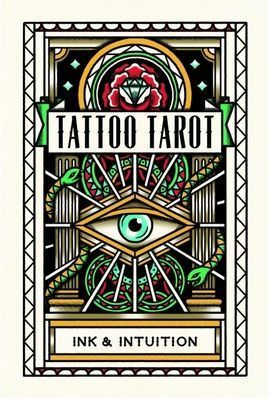 Want to win your own set of Tattoo Tarot cards? We've got three packs to give away to winners worldwide.

All you need to do is tell us which tarot card you'd most like to have tattooed on you - theoretically of course! Leave a comment below to enter.

Tarot has origins in both Europe and Asia, based on a combination of a standard 56-card playing card deck and an added set of 22 ‘trump cards’, now commonly referred to as the Major Arcana (roughly translating from Latin as ‘secrets’). According to historians, the complete 78-card format we see today first emerged during the early fifteenth century in Northern Italy. During the sixteenth century France’s Marseille card patterns were developed, producing a design style that underpins much of what we see in modern tarot cards. While tarot art styles diversified from the early twentieth century, the Marseille designs have remained the staple among the 22 Major cards. In decks keen to preserve simplicity, alongside beauty, the clean lines of the traditional Marseille patterns feature across all the cards – as with Tattoo Tarot.

Tattooing has an even longer, and decidedly chequered, history, from its ceremonial symbolism in early Egyptian and Greek civilisations to Japanese embracement of the art form, and it has been in and out of favour in the west: in nineteenth-century Britain it suffered from sleazy or freak-show connotations, but turn-of-the- century New York City witnessed its rebirth in a craze for tattoo flash art. These days tattooing is celebrated as phenomenal body art that is rich is symbolism, and many tattooists command great respect as fine artists.

The stylistic elements of the art of tattoo inking are well represented in Tattoo Tarot, including beautiful and iconic symbols such as the heart, arrow, rose, diamond, snake and key. Beginners and more established readers will be able to work well with this symbolism, which also crosses over to more modern Tarot territory.

Tarot cards have had a variety of uses historically, including for card games, but today people usually use them for seeking answers to questions, maybe as a quest for divine guidance or inspiration. Readers can experience the card’s answer being given in an uncanny way, revealing something hidden but recognisable in the situation or thought process. Therein lies the significance of the Major (22) and Minor (56) Arcana cards, with ‘secrets’ bubbling up from the deeper realms of consciousness and experience.

The seeker of answers from tarot was traditionally called the questioner or ‘querent’ (the person with the query) and the answer ‘ sought, the ‘quesited’. We can view this ‘questing’ as a spiritual journey, allowing divine guidance to emerge. The journey often turns inward, requiring soul searching, but may also involve considering aspects of the external situation. Depending on which cards appear, and our responses to them, we may or may not like the view and story in the cards, but can freely decide which visual impressions and messages to keep with us. Exact interpretation may be coloured as much by personal experience as current mood.

Intuitive responses can be equally as important when reading the cards as working with any established meanings. The tarot reading method can be as simple as drawing one card and meditating upon it, seeing what the image conveys. More complex card layouts suit the search for greater depth of meaning. It is recommended to keep the focus on ourselves, noting information to help guide our own decisions, while being respectful of others’ privacy. When consulting the cards, we might focus a question along the lines of: ‘what do I need to see, know or do in this situation?’ A three-card reading can be enough to explore a pressing question, while a five- card layout suits more time and detail.

Drawing and interpreting the cards

First, shuffle the cards. Remember to stop after a chosen number of times or when it feels right to do so. Place the deck face down, so that cards can be turned from the top, or from a ‘cut point’, in their shuffled order. Alternatively, they can be fanned out, face down, with cards drawn from random places in the fan, based on intuitive prompts such as feelings or visual cues. Drawn cards are placed face up, in the order in which they were chosen, into the preferred layout or ‘spread’.

Interpretation requires trust in your personal response, but it can sometimes feel easier to work from established meanings, especially when first using the cards. Some cards are naturally more positive or negative in meaning, while others have varying degrees of both ‘positive’ and ‘negative’ connotations, occasionally presenting contradictions. Any given meanings should be considered in context but not taken too literally. They may signify something being easy or difficult, desirable or not desirable. To find the best interpretation in the cards, it helps to let instinct guide you and focus on what seems closest to the truth for you. This may be represented by the symbol, word, phrase or described circumstance or quality to which you feel the strongest pull.

Whenever associations seem more difficult to relate to, it is fine to come back to the cards later. Or further clarification can be sought by drawing another card from the deck – a technique particularly useful with Court cards (the Minor Arcana’s ‘people’ cards) and Major cards with more abstract meanings.

When considering a card’s visual impact, it can be helpful to let a response emerge as you might do with any work of art: allow some : time for the design to speak to you. You may notice colours, the order of any pattern, or the significance of specific symbols. For - example, in the 2 of Cups card, what do the two cups and their positions say to you? What do the two hearts tell you? Is the reversed heart in harmony with the upright heart or does it go against it?

In this booklet, traditional interpretations are given alongside current connections. We often have only single words and short phrases to work with in tarot interpretations; focus on those that jump out, or that you most identify with. Or simply consider how to connect a given idea to the situation asked about. It is worth keeping in mind that no words are final, that interpretations are, neither definitive nor prophetic. The cards are just a means of contacting the deeper reaches of consciousness and offer helpful clues for moving forward as positively as possible.

The card spreads shown here provide set-positions that frame the meanings of specific, drawn cards. This can add structure and clarity to readings. You can also lay any number of cards in sequence and simply construct a story from their meanings, as you go. Have fun choosing your own designs and methods for your reading!

You can pick up your own set of Tattoo Tarot cards from the Laurence King website.

Laura
“I don't know all the cards meanings, so I would pick the sun because I like how it looks in almost every deck I've seen!” 16th December 2018

Susan P.
“When I was young I would have picked the Page of Cups but maturing, i would now pick the Queen of Rods. Looks like an amazing deck