We chat to Mary, hat maker to Sneezy the Penn State Squirrel (and Facebook Sensation!) 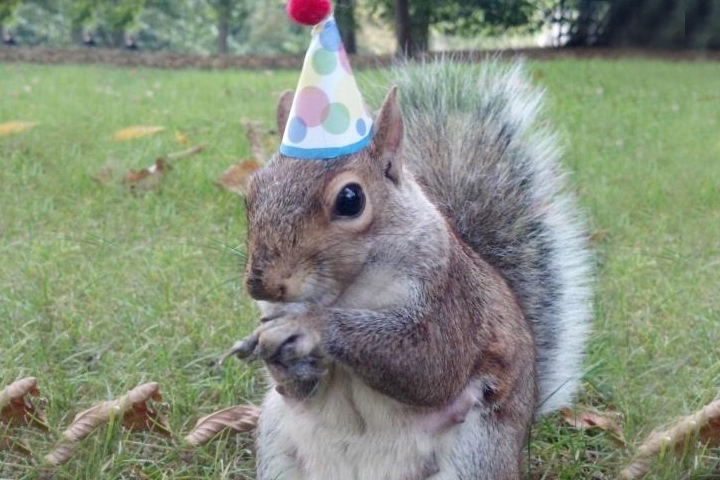 
Now, when someone is asked to interview a young lady who enjoys making hats for squirrels, there is a point where you stand back and think….huh?!?! However, against all initial reservations what a pleasant surprise it was to find out all about Mary Krupa and her little friend Sneezy, a squirrel who lives in the grounds of Penn State University, Pennsylvania.

Make your own Propellor Hat

But first, want to make your own version of Sneezy's propellor hat to be worn by squirrels in your local area? Download this template and follow these instructions:

1. Cut out the pattern on the solid lines.

2. Make mountain folds on the dotted lines to create the tabs and give the hat a curved shape.

3. Glue each tab to the back of the neighboring hat segment. 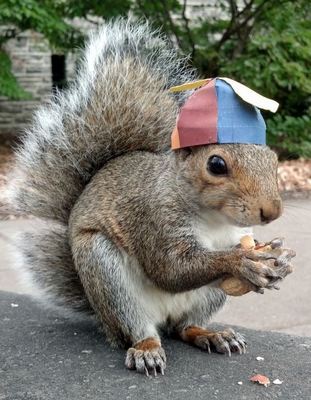 What gave you the idea to make little hats for Sneezy, I am so impressed that the squirrels are so tame at your campus, are they with everyone or just you?

The Penn State squirrels are special. They’re so used to being fed by students that they generally aren’t afraid of anyone. One day, I saw some people sharing their lunch with a friendly squirrel, which isn’t a rare occurrence around here. The squirrel was eating food right out of their hands, and it didn’t so much as flinch when I approached it. Then, acting on pure, stupid impulse, I decided to see if the squirrel would allow me to pet it. Fortunately for my fingers, it did! I then remembered that I had a tiny, squirrel-sized straw hat lying around my craft bin at home, and I decided to see if this squirrel would model it for me. The next day, I came in with the hat and located the squirrel (I knew it was the same one because of her very distinctive tail). I placed the hat upon her tiny, furry head and snapped a picture with my cellphone. From then on, we were buddies. I’d make sure to bring her some peanuts every day, and she’d come running up when she saw me. In exchange for a few tasty morsels, she’d allow me to stroke her soft, warm fur. When it got hot out, I’d offer her some water from my hand. She even occasionally sat in the palm of my hand while she ate. I’m majoring in Wildlife Sciences, so even when she wasn’t in the mood to play with me, I’d watch her go about her daily business of burying acorns, chasing other squirrels around, and popping in and out of knotholes. She would make the cutest little sneezing noises after rooting around in the dirt while foraging for food, so I decided to call her Sneezy. A few weeks later, my grandmother’s birthday was coming up, and I wanted to make her a birthday card, so I made a tiny, squirrel-sized party hat, visited my little furry friend again, and took a picture to put on the card. It was so adorable that I decided to make a little Facebook page for my squirrel and post her pictures on it so that Sneezy could help brighten up the day for the whole world. 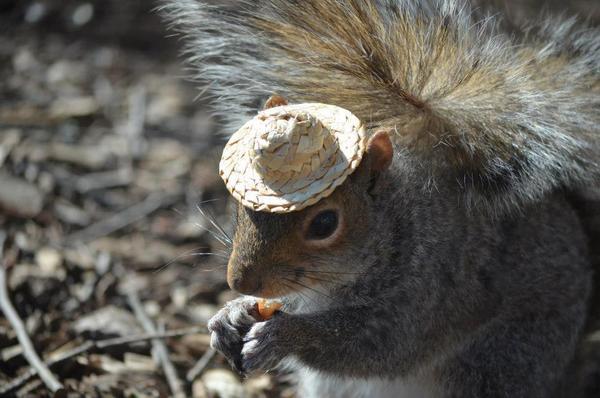 How long have you being making these creations for Sneezy? Do others help? I’m sure you must have people sending in items for her.

I started “patting and hatting” the squirrels at the beginning of the school year, so late August/early September. I make most of the hats myself, but I do encourage people to post suggestions on Sneezy’s Facebook page so I don’t run out of ideas! Occasionally, though, someone will make a hat for Sneezy. For example, the Penn State Blue Band made a tiny, rodent-sized replica of their marching band hats for Sneezy to wear. 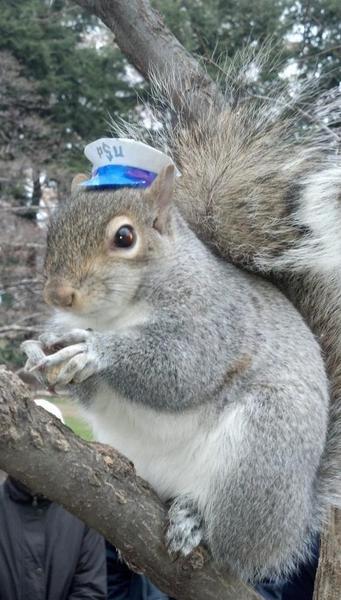 Where does you inspiration come from for the hats and what kind of materials do you use?

As I said before, I do get suggestions from fans on the Internet, and I also try to have her hats relate to holidays or events, like Halloween or Christmas. Sometimes I just make hats that are super-cute, like the propeller beanie or the tiny top hat. It should be  a law of nature that any animal is cuter if it’s wearing a hat. Seriously, imagine any animal. Now imagine the same animal wearing a hat. It will be 1000x cuter! I don’t want Sneezy to feel uncomfortable, so the hats are almost always made of lightweight paper. She probably doesn’t even notice that she’s wearing the hat!  I look for paper templates  on the internet, modify the colors or design in Photoshop, and then I’ll scale the template down to squirrel-size the hat. Then you just print the template, and cut, fold, and glue! Voila, a squirrel hat!

Do you enjoy any other kind of crafts or have any other hobbies? Or is this your first time crafting?

I like to make physical objects, like snowglobes and figurines. I haven’t had much time for crafting lately because of school, but whenever I do have the time to make something, it’s probably going to be video game related. I’m a huge gamer, with a particular fondness for Sonic the Hedgehog.

Have you any concerns about people accusing you of animal cruelty? It’s obvious from the pictures that Sneezy is perfectly happy with a hat on her head but there are some who would consider this a form of abuse, what would you say to them?

I’ve never been accused of animal cruelty, which is surprising because nearly everything animal-related on the internet is, sooner or later. I suppose because squirrels are considered by some people to be vermin, there really isn’t much concern as to how they’re treated. The important thing to remember is that Sneezy, as tame as she is, is not a pet. I never force her to do anything she doesn’t want to do. That would be impossible, because when she gets tired of hanging out with me, she’ll just leave and climb up a tree. I let her come and go as she pleases. I also specifically design the hats to be lightweight and comfortable, and I make sure to feed her only healthy squirrel foods, like unsalted peanuts and even wild acorns, if they’re available. 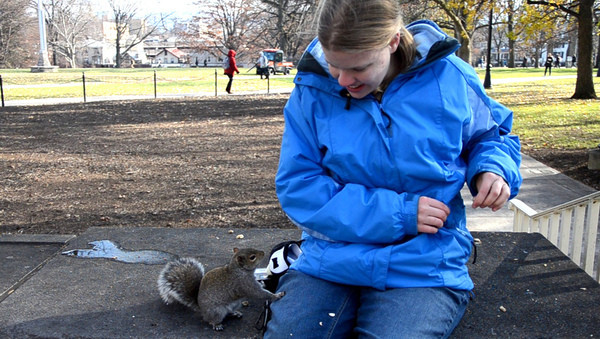 What is the future for you and Sneezy? Do you plan to continue making hats for her as long as you attend Penn State? What will happen when you leave?

I plan on making as many hats as I can, although I’m not sure how much time I’ll have for squirrel hattery as my courses become more rigorous. And it’ll be four years until I graduate, so I have no idea what will happen then. Maybe people will have lost interest by then. And if not, I guess Penn State will need another squirrel whisperer after I’m gone! 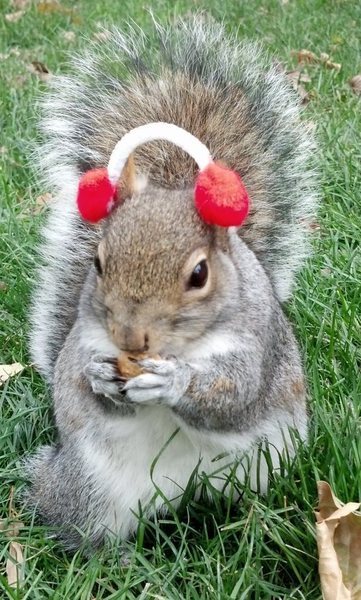 And Now, the Final Fab Five!

1. If you could make a hat for anyone (or anything) what or who would it be for?

Penguins!!! They’re one of my favourite animals.

I plan to refurbish an old arcade machine as soon as I have the time/money to do so. That counts, right?

Currently, it’s the Santa Claus hat, which I actually managed to find at a craft store. It’s really a shame that nobody mass-produces squirrel couture; it would save me a lot of time!

That’s a toss-up between Sonic the Hedgehog (even though he doesn’t wear anything but shoes and gloves) and any of the Chipmunks from Alvin and the Chipmunks. I think I’ll make a little replica of Alvin’s red baseball cap for Sneezy someday.

You know, for a squirrel, Sneezy is surprisingly picky. She doesn’t like grapes, oyster crackers, or zuchinni bread. But she Loves peanuts!