T-shirts, colouring in and rock. We chat to Lachlann Rattray. 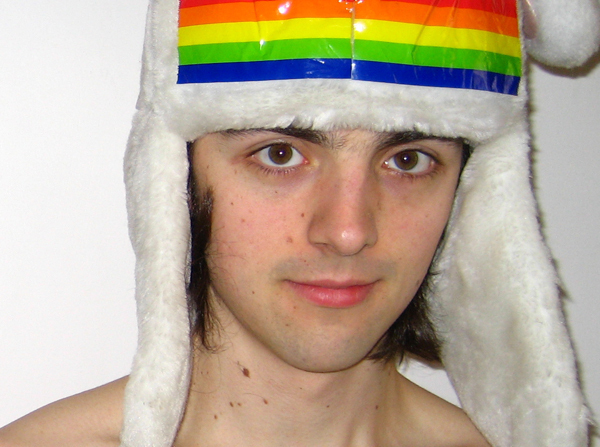 
In between performing as half of Glasgow band Gay Against You, solo act Yoko, Oh No! and colouring in his childlike-meets-macabre doodlings on a computer, Lachlann Rattray finds the time to customise t-shirts under the name Holy Wow. Floating limbs, pulsating swords, cartoon pyramids with evil eyes – it’s like being trapped in the hallucinations of a Ritalin deprived hyperactive child who’s been whacking sherbet. In a circus.

Hi! What have you been up to?
I’ve been sewing t-shirts, getting ready for our tour and putting on an art show.

Have you always customised your own clothes?
Yes - the first thing I ever customised was a t-shirt that said “S Club Juniors are the new Hitler Youth”. I customised a Pixies hoody next using toilet bleach but I left the bleach on for too long and it bleached all the way through and made holes in the top!

Goodness! What made you start 'Holy Wow'?
I bought a sewing machine on a whim and started making t-shirts for myself. Then I thought maybe people would like to buy them. So I started putting them on eBay and made a myspace. I only make one-offs; I don't make batches of them and just sell them sporadically. I also customise other people’s clothes that they send to me.

How would you describe your t-shirts to a blind alien?
They tend to feature dismembered body parts. I sew appliqués on and screen print over them. They’re usually in pretty silly colours.

Who or what inspires you?
The artists Matt Lock, Kate Moross, Devon Vermega and Carrie Cassette Playa. Oh and Jim Woodring.

What are you up to next?
I'm going to start making more t-shirts and start selling them in local shops. I want more people to send me clothes to customise and try out some more outrageous customisations!

Cheers, see you!Check out Lachlann's band Gay Against You at their myspace.