"Splat! That's the sound of grandma and her quilt colliding with the comic book loving teenager next door." 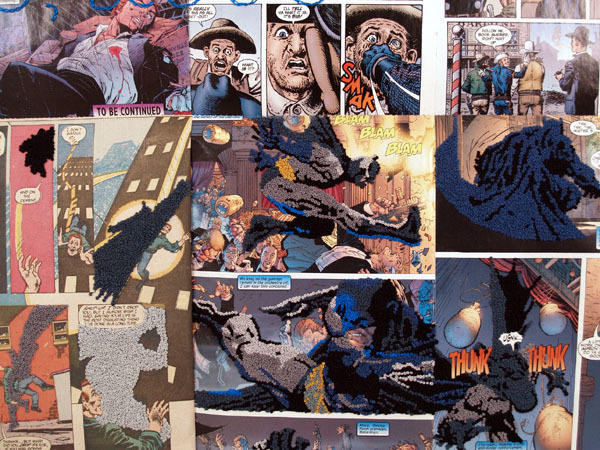 
Splat! That's the sound of grandma and her quilt colliding with the comic book loving teenager next door. The worlds of quilting and comic books don't bump into each other all that often, but when they do, astounding results may occur. This is certainly the case in the works of a few contemporary artists

who are combining the two mediums in never before seen ways. Mark Newport is primarily known for his embroidered comic book covers and knit superhero costumes. More recently he completed a series of quilts which consist of panels of embroidered comic books sewn together. By juxtaposing masculine associated superheroes with embroidery and quilting, Newport explores male identity and societal expectations. Quilt artist Ai Kijima has also included elements of comic books in her work. The words "Ka Voom!" are strewn across one quilt while Spider Man crouches next to a cartoon bunny rabbit in another.

Both Newport and Kijima are textile artists who are incorporating comic book culture into their work. But what about when you get a comic book artist who decides to take on quilting? Ryan Claytor wields the pen behind Elephant Eater Comics. When he decided to make a comic strip about his relationship with his aging grandmother however, Ryan decided that pen and paper weren't the most appropriate tools for the project. Instead he began to contruct a quilt using the traditional paneled layout of a comic book. "The practical use of quilts is to warm and comfort the subject. The memories I have of my grandmother are very fond and close to me and I don't think another medium could have captured our relationship quite so accurately." The warmth between Ryan and his grandmother becomes clear in the different panels of fabric, which show them engaged in a "fierce gambling match" and then later on, touching hands while watching television.

On the surface it may seem that quilts and comic books couldn't be more different as forms of creative expression. The fact is however, that these two underdogs of the artworld have a lot in common. Both consist of a series of panels which convey a story. In the case of comic books, the story is direct and contains images and words that move sequentially from panel to panel. In a quilt, the story might also be direct, specifically in the case of "story quilting" in which images and sometimes words are used to tell a story. Even in more abtract quilts, a story is still told in that the chosen fabrics and designs can say a great deal about the quilt's creator. In particular, both comic book and quilts have often been used to tell stories that have emotional significance for the creator. Cancer, AIDS, 9-11, the Holocaust and subversive politics have all been expressed using both mediums. Given their similarities, it's surprising that there hasn't been more interchange between quilting and comics in the past.

This is not to say that quilts and comic books have never crossed paths before. Most notably there was "Crazy Quilt", an obscure D.C comics villain who ran around in a patchwork patterned tunic and tights which he accesorized with a jaunty scarf. "Crazy Quilt" referred to himself as the "King of Color Crimes"and he could shoot light rays out of a special hat. Sadly, he didn't last long. Crazy Quilt may not have been too successful as a comic book character but given what we're seeing today with the works of Newport, Kijima and Claytor, perhaps he was just a bit ahead of his time.