We chat to Santa's daughter, the mischievous Jingle Belle. 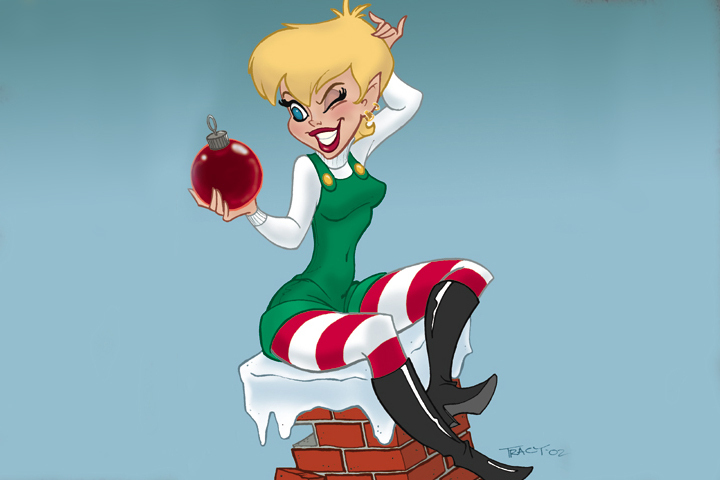 Hi Jing! Why don't you introduce yourself to our Snippets readers?
What up, Snips! It's cool be hanging with you crafty cats. Jingle Belle Kringle here, (almost) live and direct from my igloo at the North Pole. You might have seen some of my comics from Oni, Dark Horse or Top Cow, or followed my postings on www.jinglebelle.com. My claim to fame, such as it is, is I'm Santa Claus' daughter. You might think "How did old fogies like Santa and Mrs. Claus wind up with a teen-age kid?" Well, the TV Xmas specials and songs and stuff never got that part right. The truth is, Santa is a lot younger than he looks (though he blames his white hair and stress eating on me - typical!) and Mrs. Claus is actually the queen of the Northern elves. So rather than having to explain to everyone that their daughter is the product of a union between an immortal folklore icon and and ageless elfin queen, they keep the cuddly grandpa-grandma routine going. Makes it a hassle to get some credit those times I actually do something right. Sigh. Poor me.

So, you're Santa's daughter. We've searched everywhere - nobody has a bad word to say about him… expect you! Why the hard feelings?
Well ya know, because he is Santa and he insists that kids be nice, he holds me to a higher standard than most. It's hard to be a teen-ager when your father always knows if you've been bad or good. Also, whenever I come up with a cool idea for a toy, he either shoots it down, or takes credit for it himself! Is that fair? "We're a family operation," he says. "Share and share alike." Yeah, try and remind him of that the next time he lunges for some kid's milk and cookies. That's a good way to lose a hand.

After appearing on the 'Naughty' list for the past few years, have you changed your ways in time for this Christmas?
I've got to be me, even if that means a stocking full of coal again this year. Honestly, it doesn't bother me anymore, especially since I've been amassing lumps of coal for well over two hundred years. I make a killing reselling them to trappers, explorers, Inuit families, anyone with a coal-burning heater. Did you see the pimped-out snowmobile parked by the igloo? Pure profit, baby! Luckily daddy hasn't caught on yet.

Assuming you make it to the Nice list, what's on your list?
Ha! You're funny. But just what iffing, I could do with a Wii and any warm clothes that cover my legs. Two hundred years of shortyalls is two hundred years too many.

You must have access to lots of insider gossip from the North Pole. Dish the dirt?!
What dirt? My dad's a saint, literally. My mom's so sweet she could give Mary Poppins diabetes. The rest of the elves are okay I guess, but they all buy into Santa's strictly G-rated view of life. It's kind of Orwellian, if you ask me.

Coming from such a famous family, what was it like for you growing up?
Well, I certainly didn't lack for toys, if that's what you mean. Though looking back, that was part of the problem between me and Popski. I'd go to the workshop looking for a little daddy and me time, and he'd be so busy that he'd just give me one of his newest and shiniest toys and tell me to amuse myself. So even though I'm an only child, I grew up having this weird sibling rivalry with nearly every other kid in the world. It wasn't all bad, though. I have some interesting relatives. The Easter Bunny is my godfather and my uncle is this wild character named Peter Krampus. Ever hear of him? Back B.J. (Before Jingle) my dad used to make his Christmas Eve rounds with this freaky devil guy. You might also know him by the name Black Peter. He used to follow Dad and hand out beatings to bad kids as a way of scaring them into being good. He'd even threaten to drag the really nasty kids off to Hell! Now that's a routine I can get into! I don't think my Uncle Pete likes me very much, though. He still blames me as the reason Santa fired him. I get into that story in my latest book, coming out this month from Top Cow. You can read all the details there.

You seem to help those elves out a lot. Do you enjoy the crafting? What are your favourite things to make?
Lately I've been experimenting with toy-making myself. You know talking dolls? I'm working on some talking BACK dolls. Push the button and they give you lots of attitude. They also guilt you into buying more accessories for them. I think it'll be a hit.

Have you got anything nice for Ida Red, Grechen and Eddie?
Despite my riffs with Daddy, I always remember my buds at the holidays. Now for Ida Red, there's not a lot I can get for a super-powered mutant cowgirl, though a new pair of Daisy Dukes always keeps her happy. Gretchen's our head baker, and last year she flipped when I gave her a gift certificate for Sur La Table. It's hard finding the perfect present for Eddie, 'cause he's got nearly every Christmas record known to man or elf. But this year I scored big -- a still sealed copy of the Three Suns Christmas album -- hard to find in any condition. 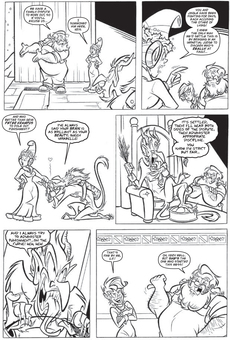 Click above for a a one-page sneak peek at the new GROUNDED story!

What do you do when spending time with the family get's too much to handle?
I split for down south and spend some girl time with Ida or my other BFF, Polly Green. She's a Halloween witch in training. I think it's important to have good relationships with the next generation of holiday icons. If I don't feel like traveling, I'll just shut myself in my igloo and watch the latest episode of "Tower Prep", free plug!!

It's great to see you raising some awareness in print and across the web. Should we expect more Jing in 2011?
Sure. First up is my story "Grounded" which appears in this year's Top Cow holiday special. After that, well, I have some surprises I'll be announcing early in the new year.

And, any new year resolutions?
Not really. If I clean up my act too much. Daddy will stop giving me coal, and I'm planning on buying a hot tub. I don't know exactly how that will work out in an igloo, but I'll give it a shot.

Find our more about Jing and see some of her comic strips at www.jinglebelle.com.