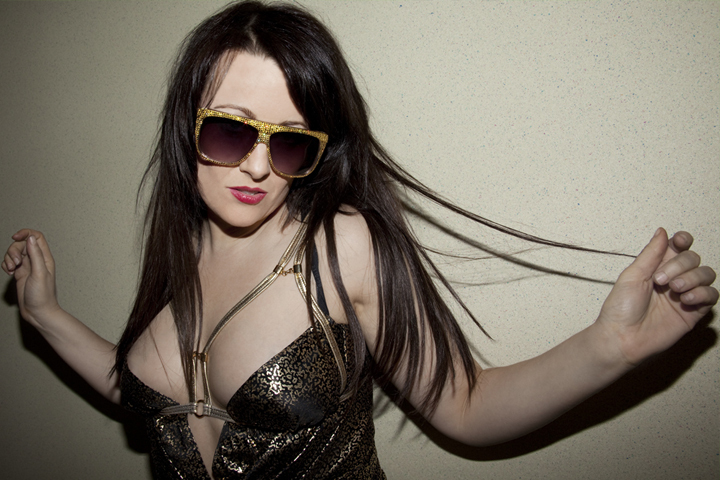 
American hip hop artist Princess Superstar may look more like a Hollywood starlet than a gangster rapper, with her platinum blonde hair and glamours style, but there's a lot more to this bombshell than meets the eye. This summer, we caught up with the bad babysitter to find out what's she's been up to and how's she's been keeping herself so cool.

"The new album is coming out beyond my wildest dreams... I have never made music as good as this before."

"From when I first heard Kurtis Blow on a pirate radio station as a kid, I have always loved hip hop", explains Superstar on her love for hip-hop and becoming a rapper. "I never thought that I would end up rapping or anything. It was more about trying to make my friends laugh. It didn't come naturally at all. I sucked. I just loved it and kept doing it." Now a rapping pro, she is currently working on her sixth recording. "The new album is coming out beyond my wildest dreams. I am so excited. I have never made music as good as this before. Lately the inspiration has just been wanting people to be happy and to think when they listen to my music. But inspiration can come from anywhere and from anything - Eckhardt Tolle to Tim & Eric."

Describing her style as "a little bit ghetto, a little bit hippy, a little bit glamorous and a little bit ridiculous", Superstar also brings her unique outlook to the hip hop world, with hits like Bad Baby Sitter and concept album My Machine. As well as making her own music, she has collaborated with such acts as The Prodigy and De La Soul, with her highly demanded DJ and producing skills taking her all over the world. "I love playing in Europe and in Japan. Holidays are funny for me because I travel so much, actually being home in NYC is more of a holiday for me! But I do love the woods, so I try to get into nature when I can."

"I like defacing clothes. I have a second hand Fendi shirt with the F's all over it and i wrote "Logos suck" in magic marker on it."

"I like to run and am a serious yoga practitioner", explains Superstar, about keeping active on tour. "Also I get fit by performing, I jump all over the stage like a monkey when I play. My fave workout music includes Digitalism, Crookers, Jay-Z, Who Made Who, Tittsworth & The Federation, Homeboy Sandman." As well as keeping fit, she is also a raw food enthusiast. "It is the best thing in the entire universe. It's really changed my life. I never get sick, and my consciousness is soaring. It was a gradual process - first I was vegetarian, then I went vegan, and then raw. It's easier that way, first you get rid of meat, then fish, then dairy, then cooked foods etc. I did a program with Amy Rachelle, who is a raw food goddess, and it was hands down one of the best decisions I've ever made. It's not hard on tour at all because I come prepared with food. It's a lot easier than you think. And you can always get a salad out, wherever you are. The payoff is so great that I never miss eating the old way."

"I absolutely love making food, and I love feeding people. I always have people at my house and I make them food. I love making a kale, dulse and olive salad; veggie flax seed crackers; curry coconut kelp noodles; strawberry mousse. All raw, all vegan, all the time!". With such a busy schedule, we wondered how she likes to relax. "I love spas, saunas, steam baths and massages. There is a place in Queens called Spa Castle. It's 5 floors of whirlpools and saunas. It's heaven on earth."

She continues on to describe a day in her life. "Drink fresh squeezed green juice, meditate, work on music, answer a million emails, update blog/tweets/myspace, make phone calls, yoga, meet friend for dinner or make dinner at my house, go see music at night or read a book that usually is of a spiritual text and go to sleep early, or, rush to the airport and go to Europe to play."

"Please go and rescue a bird. Give him a nice home and let him out in your house all day!"

Considering her other passions in life, she tells us about her favorite pets. "I have 2 birds, I love birds the most. What people don't know is that birds are very affectionate and smart. My birds hang out and sing with me all day. Lots of birds need rescuing too, there is nothing sadder than birds stuck in cages. Please go and rescue a bird. Give him a nice home and let him out in your house all day!" Having completed a photoshoot for PETA, fans could vote for Superstar as their sexiest vegan. "I am pretty active in animal rights. I've done stuff for Farm Sanctuary and other things, so I really wanted to do something for PETA. I met up with them first in Berlin and then they used the image for the USA."

With almost 3000 followers, Princess Superstar has become a Twitter addict, tweeting daily. "I like the interactive nature of tweeting. I like to talk to people, my "fans" which I put in quotes on purpose. I like to see what other people are doing, what their vibe is. I am curious. I guess you could say I am techie as I live on the computer. I make music on the computer too using Ableton Live."

Looking to the future, Superstar reveals her hopes and dreams for the rest of the summer. "I want to make the most beautiful and amazing record. I want to fall in love. I want peace on earth and all beings everywhere to be happy, joyous and free."

You can find out more about Princess Superstar on her website or start following her on Twitter.

mew
“i'm actually getting quite sick of peta doing that.” 27th September 2009