Hello Everyone! My name is Zina, I'm a creative little critter from Tasmania Australia, I have two cats. I think animals are great! I love sewing! I make teddy bears, Like to design and sew clothes! My favorite hobby would have to be Barbie doll remakes re-rooting hair re-painting faces and creating costumes! I love creating tiny detailed objects, I also enjoy painting, drawing and making things out of clay. Anything crafty really

Most of my projects turn out pink because its my fav colour! 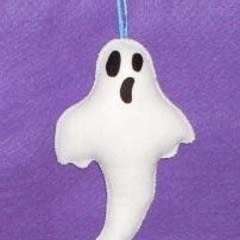 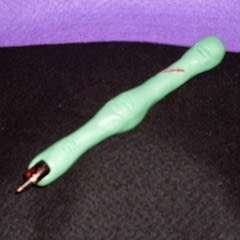 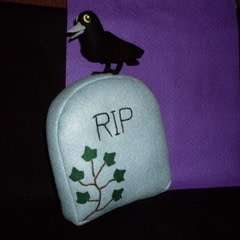 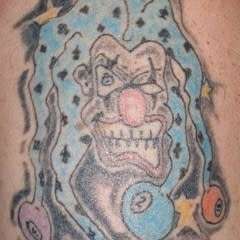 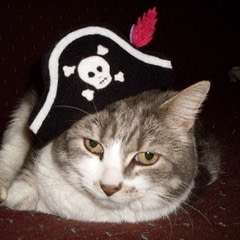 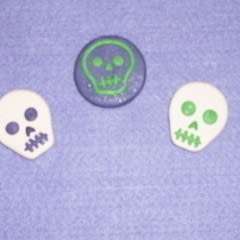 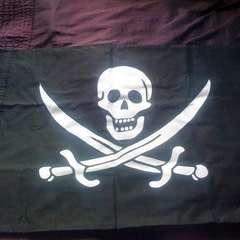 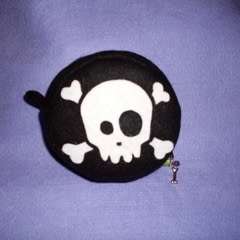 Skull And Charms Round Zip Up Purse 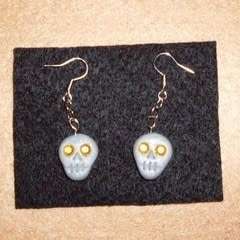 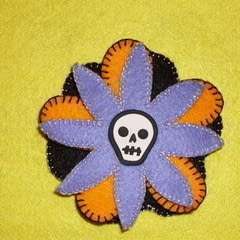 Azraels Requiem · Bridgeport, Connecticut, US · 47 projects 21st January 2011
And thank u, I've got more to post when I have the time.
Reply

natasha b. · Guildford, England, GB · 4 projects 2nd January 2011
Thanks for the favourite! Love the pirate themed projects, if only my cat was as good as yours at sitting still for photos! Think I'll have a go at that pirate hat anyway - it's too cute to not risk scratches for haha
xx
Reply

thank you for favouriting my keyring

Cristina T. · Grand Rapids, Michigan, US · 6 projects 24th October 2010
Thanks a bunch for the fave on my Halloween kitties/skull!
Reply

Alf · Puerto Rico, Misiones Province, AR · 17 projects 21st October 2010
Thanks for your comment on Recycle Your Cds I had fun making this and it looks nice on the wall so now if am bored I will work with something to see what happens

October 18th, 2010
thank you Zina for the fave on my Skull Ring holder

Kate J. 18th October 2010
I just have to ask - how did you get your cat to stay still while the pictures are being taken?
Reply

Ruby · 11 projects 17th October 2010
Hey Zina thanks for the fave's on a couple of my projects! Oh and I saw that it is your birthday today... Happy Birthday

brandYlee · Kansas City, Missouri, US · 9 projects 14th October 2010
thanks for being my friend! Cant wait to see what else pirate you will create!!!
Reply

And I accepted the friend request!
Reply

LdotScott · La Cañada Flintridge, California, US · 12 projects 13th October 2010
Hey Zina I'm glad my package made it to you! I am finally relieved!! I hope you enjoy everything!!
Reply

October 7th, 2010
Thanks Zina...it really took forever for me to figure it out though!
Reply

Jet H. · Haarlem, North Holland, NL · 108 projects 4th October 2010
Hi Zina thank you very much of your fave on my basgitar etui project, wish you much crafting fun with the making of and profite after finishing too.
hey have an awesome fine fun week as well;-D
Reply

September 24th, 2010
you are so sweet to offer, but I'm sure I can purchase some from here... I just don't get into town often. Surely posting would cost more than the stencils themselves as I'm in the states. And your projects are super cute. I think its really neat that you remake barbies.

well I have to get the kids to the bus now. take care Zina
Reply

September 23rd, 2010
thanks for the friend request Zina.. hope you are having a good day!

LdotScott · La Cañada Flintridge, California, US · 12 projects 22nd September 2010
anything in the mail yet? i am being very impatient!
Reply

September 21st, 2010
Oooo friendooo! Thanks for for favouriting my little pumpkin=)
Reply

Loopy · Avgorou, Famagusta, CY · 19 projects 11th September 2010
hey Zina you said on my board post about staining with coffee, how would I do it ?
thank you
lots of love
loopy


I like your cat names too. and like it that you make such effords for me. this morning my friend Karin called and we were chatting the whole morning.LOL so i must do still a lot.LOL
Her hubby tells me everytime when i told him i'm feeling myself quitly about it, she is quilty about that too.LOL
but next week she comes to me to help me with my cleaning for the big move.
yes i like history and architecture too , it tells so much to people and of how they lifed, i always try to make a picture how that must have been and how that it had to smell and feel.
mayby silly , and try how to picture their cloths, but that 's what i have learned to on the art academy.
i loved our lessons of culture history , i had the normal arthistory and too the history of fashion and textile or fabrics as well.
so when you feused them all to gether it become such a pattern to do that.
and .... when i see an historical movie i see always the wrong detail of cloths.LOL i must laught about that.
Haarlem has like Amsterdam much of the same architecture style.
Haarlem is the capital city of the province Noord Holland and Amsterdam is the capital city of the country, most people think that it's Den Haag because our queen lives there and the goverment is in this city, but it's Amsterdam.
Amsterdam is with Den Haag, Rotterdam and Utrecht the bigest city's Haarlem is smaller , but really big still too.
It was a long time a very expensive town to live, but now it has changed so a lot of young people go to Haarlem to live there because the houses are much cheaper.LOL
like i will have with m y rent, i have strangly less rent to pay then this old appartment. its a great big appartment of the 70ths, and during this time everybody thought that all was okay,LOL
so i have very big large windows , and i love that.
a big balcony and because we are not like other flats because on every floor we life with four appartments a big large extra room that we shared like a living group but we have our own badrooms and kitchen and sanitair so when i came here we had kiddo's on the floor of the other members;-D
one of them had now a child of his own strange to think of him as a daddy.LOL
his mum is now for the first time a nanna, and she is very proud of her grand child.LOL
and i have very large sliding walls, but they are by my always wide open because they are to heavy for me to close or open.
so my cats are always sleeping with me.LOL i live in a big large space so that why Gerard one of my fave helping persons loved it that i will have doors that i can open with my wheels, like a modern kitchen drawer.LOL
so i can sleep without cats. Yummy i think it will be helpfull to sleep much better and longer.LOL
i have made yesterday some beads of plastic botles and other plastic boxes. and find out when are curves in the bottles you must wrap them in the same side of the curved line because they don't melted closely the become wider.LOL
and i have tryed to use small stickes to become more longer small sized beads , i like those experiments, my above neighbours not.LOL
hey i must call still an institute i have found out that i have made for tomorrow a double appointment. not smart.LOL
Karin said ooo i understand that you didn't had your agenda for your eyes.LOL she was right.LOL

so then i will go to my fave couch and try to sleep a little bit LOL
hey give your bubles and blueburry some strokes.
and for you all my love and hugs an a lot of kisses.
and greetings from a dutch pj girl.LOL
this mo
Reply

Lolly.Bot · Enfield, England, GB 6th September 2010
Hey honey thanks for the fav and the kind words on my Russian Doll Pop Art <3
Reply

Jet H. · Haarlem, North Holland, NL · 108 projects 4th September 2010
Hi Zina, i love your quote about the mess.LOL
i think of it as the same, but my friends not.LOL
they know my creativity but they think i need an workingspace and not in my house .LOL
my whole house is changed in my workingplace.LOL
i'm okay with that, and some of the people tells me that it's cozy , hummm i don't think so it's kind to say to me.LOL
hey thank for adding me as your friend, like that a lot.
Still winter time by you and vacation?
in my place all the kiddo's are back to school again, so it's silence, and the weather is changing to become autumn, i love that season too;-D
hey have an great fun weekend , love , hugs and greetings,xxxxxxxxxx

September 3rd, 2010
Thanks for all the love!
Reply

Jeanette · Leonard, Michigan, US · 21 projects 3rd September 2010
Thanks for favoring my magnets
Reply

September 2nd, 2010
Thanks for the Fave on my Heart Skull Plushie! Hope you have a wonderful day!

Melissa K. · U.S. Air Force Academy, Colorado, US · 51 projects 2nd September 2010
Thanks for the fav on my Chesire Cat and the friend add!

Jocelyn · Pittsburgh, Pennsylvania, US · 17 projects 3rd August 2010
thanks for adding my flower dress to your favorites!
Reply

Aw that sucks that your tools are in storage, I only got tools because I inherited them from my Granddad...

Yeah old clothes are fun, there's just so much I don't know where to start. Also, I have VERY basic sewing skills, I'd love to be an expert, luckily my mum is going to teach me what she knows. But I have some ideas

Lolly.Bot · Enfield, England, GB 12th July 2010
AWESOME!!! I've got an idea for a wood-work based project but I need to go get some materials.

For now I was thinking of altering some of my friends old clothing that she gave to me. She popped round mine one day and gave me like a black sac full of old clothes she no longer wanted for me to craft up!! So I've got free reign to be as creative as I like!! WOOOOO...
Reply

July 3rd, 2010
Hi, thanks for the comment and the favouriting of my needlecase=)
Reply

Lydia H. · 20 projects 2nd July 2010
I have been checking out the boards lately too and agree that it is nice to meet like minded people. Plus everyone is so friendly! I haven't really seen any mean comments at all, which is nice. Tasmania sounds nice. There are probably not a whole lot of people living there though, what with it being so small and your comment of it being rural makes me think of small towns and rolling hills. I have no idea if that is accurate though!

I will have to look up some pictures online.
Canada is an amazing place to live. I have moved around a lot and the scenery changes so much from place to place but it is always breathtaking. I do like to travel though and I have never been to the Oceania area.
Thanks for checking out my blog - I'm glad you liked what you saw. I try my best to post on it everyday, but sometimes I get too busy.
Ttyl.

Lydia H. · 20 projects 1st July 2010
Thanks so much Zina! I am glad you liked my projects. I am very intrigued by the fact that you are from Tasmania as I have never met anyone from there before. Isn't it awesome that all of us artsy/crafty people from all over the world can meet up on Cut Out+Keep?
Reply