Cook along with Janette from Culinary Ginger

Growing up in England, I got into cooking as a child helping my mother make Sunday dinner, so I learned a lot from her. The first recipe I made was probably mint sauce as a child, that was my job to cut the mint from the garden and make the sauce.

I have quite a large kitchen, which I love, and a lot of cabinet space. A 5 burner cooktop, 2 ovens and a dishwasher help tremendously. The best way to stay organized when cooking is clean as you go, that's the number one thing for me.

Practice, don't expect to get a recipe right on the first attempt, not many of us do. Also, read the recipe in it's entirety before buying ingredients and cooking, you don't want any surprises as you go cook.

Gordon Ramsay, he's seen enough failures in the kitchen so hopefully he wouldn't be surprised if I made a mistake and actually think he is a really nice guy because he follows me on twitter.

I studied fashion design in England so I know how to make clothing and I sew, but I don't really do crafting. Cooking is also a hobby and my husband and I love sports cars. We are huge Formula 1 fans and try to get to at least 1 race per year.

I've only been blogging for 4 months and I have learned a lot, not only do you have to know cooking, you need to know photography too, that's an on going process. 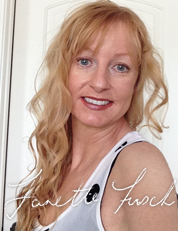