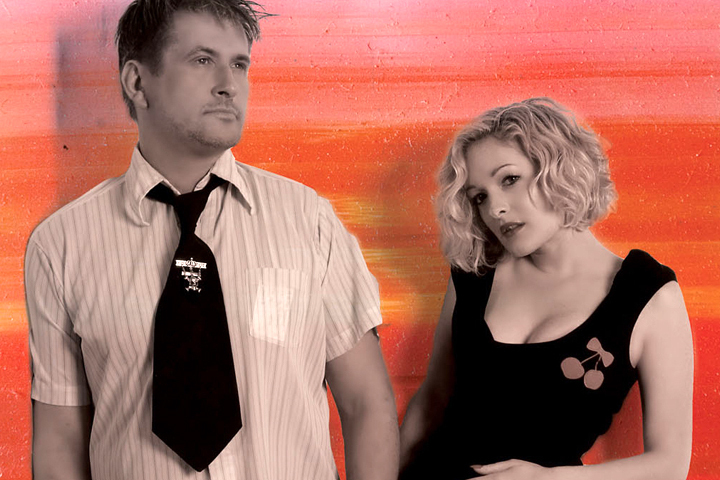 How did the band meet and how long have you been together?
We met in a gay bar in Soho, London and we started our 1st album 2 years ago.

Where does the name come from?
It's a description of our bittersweet take on life. Our album opens with the words "We are all victims" some of us are just lucky!.

How would you describe your music?
Exbuberant piano pop. It's tricky because we followed our instincts and so it's got a bit of jazz, pop and rock in there. It's a real musical journey.

Who are your musical influences?
David Bowie, Blondie, The Velvet Underground, Scott Walker.

Do you take a lot of inspiration from the past and which were your favourite eras?
The 1920's and 30's have some great songwriting and jazz and that's a big part of what we are about. The 1960's and 70's recordings have something really special, fat analogue and synths just feel so good. You can hear that on our album as we did it all on analogue gear. There's a whole world of sounds you can get by monkeying around with the tape machine!

Where do you look for inspiration when songwriting and how does the songwriting process work in the band?
We get ideas sometimes from big things like Bush's middle east fuck ups and human free will! Sometimes it's the simple details around us that seem to write the songs themselves, like coming home from an all-nighter a glam wreck!

Where are your favourite places to tour?
We love to play so anywhere with a stage is where we want to be. Having said that we had to go through The Yemen once for a gig and we'd rather not do that again!

How would you describe your style and who are your ultimate style icons?
1930's decadent meets 70's glamour. Kitty definitely channels the cheeky vamp of Hollywood blondes, Harlow and Marilyn. Nick's got that jazz era chap thing down really well. Tap shoes and Straw Boaters are not unheard of with a few demonic and rocky accessories.

Are there any ways the Lucky Victims try to be DIY or crafty?
Kitty is always sowing her dresses back together after they fall part on her onstage!

Tell us a bit about you Abominable Mashups show and how it got started?
We play our Abominable Mashups Show every Thursday at The Cellar Door. It's what happens when 2 songs collide, bit like a DJ mashup but live with 2 voices and a piano! It's all about mischievousness, messing around with rock and jazz and getting up to all kinds of shenanigans with a very up for it crowd!

Where did the idea come from?
"Mack The Knife .v. Shaggy It Wasn't Me" was our 1st mashup and we played it at a friends party, to freak them out really with our carry-ons- they loved it and we had so much fun we decided to do more!

Which Mashups have been your favourite?
Mack The Knife and Shaggy is funny and our version of Chaz 'N Dave My Way is very poignant!

Listen to the songs:

Busy Being Beautiful
Mack The Knife .v. Shaggy It Wasn't Me

What would you be doing if you weren't performing?
Rolling around on the floor in tears!

How will you be celebrating this Christmas?
There's a wonderful late bar where we hang after gigs and right next door is a spooky church. It is a tradition to drink as much as we can and turn up for carols and sing all the harmonies then sneak out before they start mass!

Hopes and dreams for next year?
Benevolent aliens will beams down and save humanity from itself before it's too late!

What's next for the Lucky Victims?
We are writing a new album and will be recording early next year. It's got touches of our Mashup antics in it so far - very addictive!

Find out more about the band at their website, Lucky Victims or check out Abominable Mashups.