French girl band, Plasticines have been on Gossip Girl, touring the world and are now here to take on Snippets. 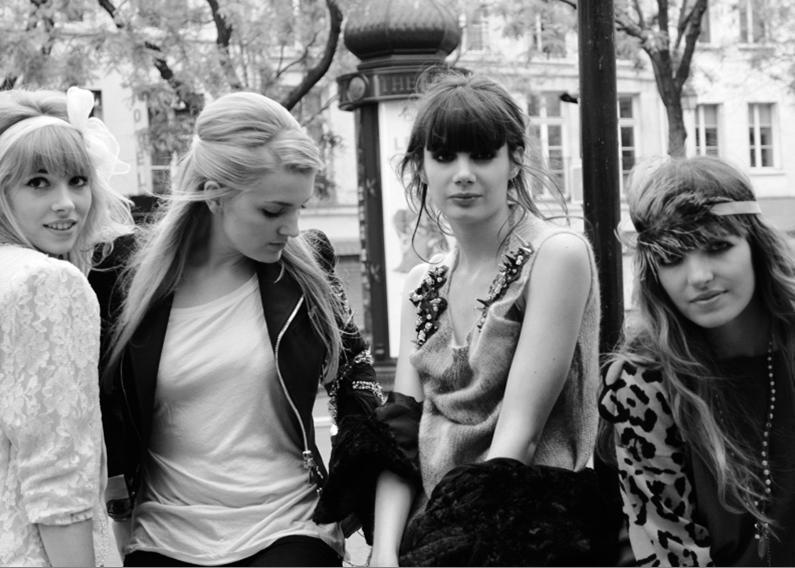 
Who's in the band and where did you all meet?
Marine (guitarist) and Katty (lead singer) met during high school and started the band, 4 years ago before meeting Louise (bass player) at a Libertines' gig a couple of months later. Ana (drummer) joined the band 2 years ago.

Where does your name come from?
It comes from a Beatles' song "Lucy And The Sky With Diamonds".

How would you describe your music?
I would say it's really rock, with a touch of pop and really dancy too.

Who are your musical influences?
We all have different influences, from the Ramones to the Arctic Monkeys, from Nancy Sinatra to Florence and The Machine, or from Santogold to Eagles of Death Metal! We all really love music and love discovering new bands and listening to every kind of music.

What would you say makes the band unique?
I dont think we're unique... just a bit different maybe. Being girls in a rock band is not something really common, right? Having a lof of influences makes our songs a bit different from a basic rock band, because we're all sharing and mixes thoses influences, while writing our songs as well.

How does the songwriting process work and where do you look for inspiration?
When we write a song it's always very personal at first, and then we bring it to band practice and everyone can work on it and add special little things. We're just inspired by what's around us - our lives, and most of it is Love.

How does it compare when songwriting in a second language?
It actually comes naturally for us to write our songs in English, I think it's because we're inspired by and listening to a lot of English and American bands.

Where are your favourite places to tour?
We loved touring in America. We've been touring there for a month with Patrick Wolf and it's been amazing. It's such a big country, there is so much to see. What's more, the people we have met on the road were all such nice and interesting people! And touring in France is good too for food, it's the best!

How would you describe your style and where are your favourite places to shop?
We all have different styles. I could say that my style (Katty) is a mix between all my music inspirations, which is between Blondie (80's) and Nancy Sinatra (60's) or Marianne Faithful. We love shopping at the vintage shops in Bricklane in London, and Urban Outfitters.

Ana: My style is more glamourous and really rock! I wear a lot of black stuff with bling bling jewellery.

What would you be doing if you weren't in a band?
Ana: I wanted to become a doctor... but I don't really see my life now without music or the band!

What are you listening to on your stereo at the moment?
Katty: I'm listening a lot to the Albert Hammond Jr album "Como te llama?", and I love this song "On my own again" by Thecocknbullkid. Ana: I'm listening to the new Paramore and the new The Used, so wiked!!

Hopes and dreams for this year?
We just want to tour a lot, all over the world, as much as we can.

What's next for the band?
We gonna be on tour in Europe and hopefully in the US too for the next year, and then another album...

Check out more from the band on their Myspace. Check our the girls on Gossip Girl here.