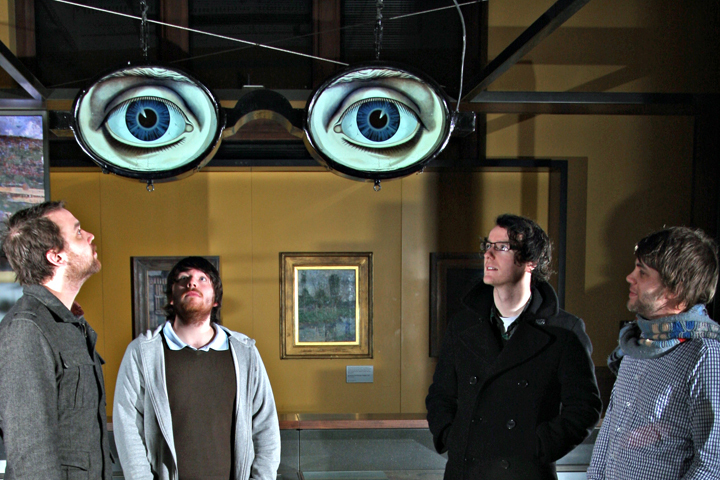 How did the band form?
Well it kind of evolved over the course of 3 years. Grant was the first to join. Billy was Grant's pal from school, and he used to come to all the shows so we figured we'd just let him be in the band. Andy knew Bill from college and we'd met a few times. Its a very nice set up we have now!

How has the band evolved?
I guess things just got more intricate and detailed, never more so than at this time. As far as touring goes, it seems to be much easier and less intense with the four of us. Many hands making light work and all that. Plus Andy has brought all of his technical wizardry to the live set, which has made certain sounds more achievable.

Where does the name come from?
My mum called me that when I was wee. It was the look I had when I was attending parties and didn't want to socialise with the other kids. I still get like that from time to time.

How would you describe your music?
At its heart, it's folk music. It's just been embellished with all sorts of bells and whistles.

Musical influences?
I love The Band, TV On The Radio, Nick Cave, Mogwai, The Twilight Sad. I'm also a fan of most good pop music, and find that I can never resist a good hook.

Where do you look for inspiration?
I guess inspiration flies from anywhere. I like to randomise my process a little, layering elements of structured sound over and under more spontaneous elements. As far as lyrics go, all I have to work with is my life and the way I feel at any given time. I'm not too good at writing about other people.

How is the new album coming along?
I think it's essential that it sounds like a departure. I have only just begun to structure some of the sounds in my head and on tape, but it should be quite different. I don't want it to be particularly comparable to the last one. Now that I'm off tour, the ideas are starting to drip drip again.

How do you cope on the road and what do you eat?
Touring is mostly quite mundane, and I find that quite meditative at times. It's a repetative existence, and not a particularly creative mindset to be in, so it's easy to get into the rhythm of driving, loading in, soundcheck, eat, play, load out, sleep, drive etc etc. I like to eat well most of the time, with the odd unhealthy binge now and again. We all love sushi, it keeps you sane.

What have been the highlights of the year?
There have been so many. The release of the album was the biggest moment for me. I was so proud of what we had done with it, so to unleash it on the public felt so exciting. The effect the album has had on our band has been wonderful, and this last US tour was very special for us.

Any new year's resolutions?
I didn't make any, but I would really like to get physically fit this year. I've never really know what that felt like...

What's next for the band?
New songs, new songs, new songs. This part is the reason why I started in the first place. I love writing and arranging music and it never gets boring for me. We also have a week-long acoustic tour in March and then our Scala show in London in April.

You can find out more about the band and hear more music on their myspace.

Tiffany S.
“Ive been a big fan of Frightened Rabbit for quite a while and i find it soo cool to see them bout everywhere on the net as not many of my friends knwo of them .. and you would never hear their songs on the radion. I would LOVE to see them perform live someday
” 18th August 2009