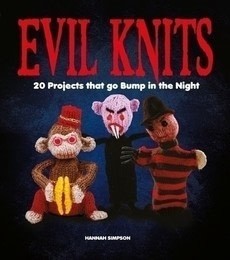 by Hannah Simpson · Published by Bloomsbury 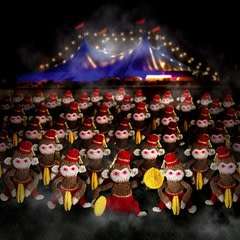 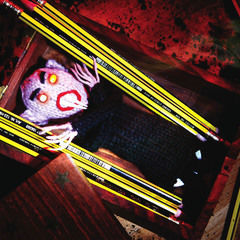 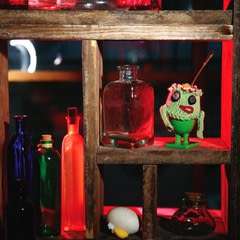 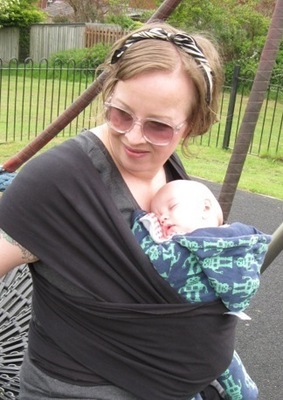 Hello! I’m Hannah and I’m a Northerner now living in Oxford with my future husband Matt and our two babies. I have had such a variety of jobs (factory worker, pub manager, lifeguard, researcher, IT consultant) I feel unable to define myself by vocation. Let’s say I’m an author though, as it’s quite glamorous.

I am interested in lots of different things, from cosmetic chemistry and herbalism to electronics and musical composition (not that I do much of that at the moment!). My interests are constantly rotating – I’ll be into something for a few months then I burn out and move on to something else for a while.

Evil Knits is a book of horror themed knitting projects, most of which are inspired in some way by film, TV or computer games. I tried to include a wide range of knitted items, from wallets to cushion covers – I wanted to include useful things as well as toys and decorative objects. I’m also delighted to have been able to include some simple electronic projects and an introduction to soft circuits, so you can make yourself a vampire with glowing eyes or a light up ghost. It’s a real labour of love.

I was approached by a commissioning editor at Quintet who basically said ‘Can you write a book called Evil Knits for us?’ and I was like ‘Yes!’. The rest was all me – they wanted 20 projects but I could have come up with loads more, there was just so much I wanted to cram in there.

I am particularly keen on the giant tentacle – it was fun to make and even more fun to have around. Everyone should have a giant, squishy knitted tentacle.

A mess! No matter how often I tidy my desk there’s never room to sit down and actually do any work. Our studio space is actually the dining area of the living room, cordoned off from marauding toddlers by a baby proof fence. I keep all my yarn in a huge wooden chest and my supplies in drawer units but I still seem to have stuff everywhere. There’s sort of a system, but pictures of my craft area won’t be trending on Pinterest any time soon.

Definitely! As a kid I was always badgering my mum to let me make things on the kitchen table – I remember in particular the time I ‘invented’ a chocolate biscuit machine (I may have copied this off Bagpuss). My mum always knitted us mad 70s jumpers on her knitting machine and sewed my party dresses. Music was my first creative endeavour and I remember writing a song about getting glasses when I was 8, it was called ‘Waltz of the Specs’.

I took up knitting about 8 years ago to give me something to do when I was quitting smoking – I was working in a bar at the time. The first thing I finished was a horse – I still have him, he has a certain dishevelled charm that’s difficult to replicate once you know what you’re doing.

Amy Karol (Angry Chicken) is my crafting hero. She’s an amazing seamstress but will turn her hand to all kinds of stuff, from making her own cosmetics to bookbinding. Her blog is so inspiring and one of the only ones I read consistently.

Non-fiction is my first love, from old craft books to the Maplin catalogue, I never think twice about buying reference books.

I’m all about the horror and sci-fi - I have been trying to work my way through some classic horror stories. The last one I read was Turn of the Screw by Henry James, which was atmospheric, but ultimately terrible. Old ghost stories are pretty much all mouth and no trousers.

I have a particular interest in heroes of Antarctic exploration and the stories of their adventures and the hardships they endured and overcame. Ernest Shackleton is my favourite, perhaps I should knit him. In fact, I probably will. Anyway, I have lots of books about that. ‘Endurance’ by Alfred Lansing is my favourite, it’s an incredible tale of remarkable courage and leadership.

I wouldn’t say I go looking for inspiration; I am mostly inspired by what I see in the course of my everyday life, whether it’s on TV, out in the street, the internet, or just a flash of inspiration. I’m never short of ideas! I like to combine my interests where possible, a sort of crafty mash up.

I mainly try and make things that I have never seen before – in fact, if I have an idea for something I make a point of not Googling it until I have finished making it, to avoid seeing something that will influencing my vision. I think it’s important to make things for yourself rather than making things you think other people want to see – that’s what makes your work authentic and gives it a unique style.

I said after I finished Evil Knits that I didn’t want to write another knitting book, but then some time passed and I forgot, and now there’s a good chance there’ll be another book at some point. It’s not horror themed though, it’s shaping up to be a much more mainstream collection – I can’t tell you any more though!

Until that starts happening, I will be working on getting some stuff into my poor neglected Etsy shop – it feels like it’s been such a long time since I had chance to work on something off my to do list.

Ultimately, my aim is to inspire and encourage people to make things – whatever that might be! I really value handmade items, I get so excited when people give me gifts that they’ve made themselves. I’d love to set up something like The Make Lounge in London, with workshops for people to learn new crafts. Don’t expect that to happen any time soon though, because I only thought of it just now.

Oh, and I’m knitting a scarf. It’s getting cold!


Knitmare on Elm Street offers an edgy and imaginative collection of knitting projects. Perfect for the fall/Halloween season, it shows an alternative take on the traditional craft designed to appeal to the modern knitter in search of something a little different.

Ghoulishly inclined knitting enthusiasts can create a diverse range of creepy crafts, from cuddly toys and miniature dioramas to 3Dknitted pictures, laptop cosies, and cushion covers. Clear instructions written in a down-to-earth and humorous tone make the projects uncomplicated for beginners. Tips on how to incorporate light, sound, and trickier techniques into the projects allow the more advanced to take their knitting to the next spooky dimension.