What are your hobbies?

What are your favorite crafts and what's your craft space like?

Sewing and customising – I’m a fashion graduate so I’m going to be biased – and crafters who create ingenious ornaments and fixtures for around the house.

What do you craft along to?

I’m loving VNV Nation at the moment – very easy on the attention span - a really atmospheric symphonic metal band called Haggard, a tape of sixties music that my parents used to listen to in their youth and the ever-expanding collection of rock music on my iPod.

What was the first project you ever made?

Figures of a caveman family, their “cave” house and a few dinosaurs, out of automotive clay in my dad’s garage at the age of 9. The first thing I made and kept was an abstract gondolier sculpture out of wood when I was 12.

What are your favorite items to make?

My own budget replicas of clothes and accessories I can’t afford. My favourite part’s the creative problem solving aspect.

Which other craft blogs do you love to read?

I guess you could say I’m all about channelling and releasing pent-up energy, be it in the hyperactive sense or in the creative sense, and it feels to me that they’re linked, although creativity is so much more intense and expressive. Obviously it’s rewarding when you’re recognised, too, and that’s why it’s always been my passion. Writing is also an art with so much potential for imagination, not to mention therapy! 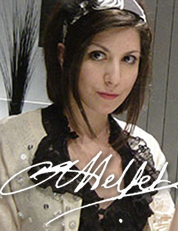