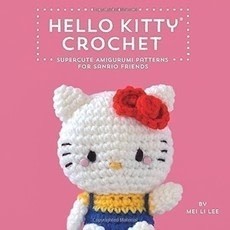 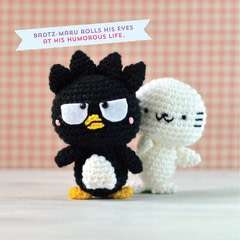 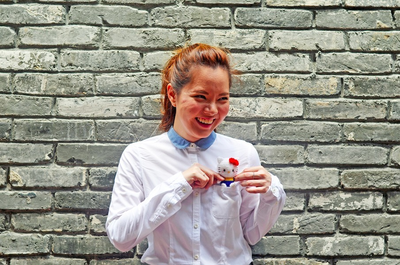 Hello Kitty Crochet is a joy of an amigurumi book - it not only has a pattern for Hello Kitty (for the first time in English), but all of her favourite friends like Badtz Maru, My Melody, Keroppi and more :) If you know a thing or two about crochet, this book will get you off to a good start in making your own bite-size Sanrio friends :)

Writing an amigurumi book of patterns has always been in the pipeline for me so it was a lovely surprise when I received a mail from Quirk Books (in early 2013). All I remember reading were the words "Hello Kitty", "amigurumi" and "book" and I was sold! The book was to be launched in time for Hello Kitty's 40th anniversary this year. A little before then, I had actually shared a few free Sanrio-inspired patterns on my blog - Purin, Pandapple and Tuxedosam. Tuxedosam was a huge hit -- the pattern even got picked up by a group of crafters in Taiwan who wanted to make over 100 Tuxedosam dolls for the children in a cancer ward in Taipei.
So it was really such a huge honour to have been 'selected' to do Hello Kitty Crochet, which is really one-of-a-kind in amigurumi land. I had a great time recreating all the Sanrio characters with yarn, plus I had the perfect excuse to take some time off work to basically just craft all day! So for a couple of months in 2013, I had a taste of my dream job :)

I'm tempted to pick My Melody as I recently made another one of her recently (and just fell in love with her kawaii-ness all over again), but Hangyodon is still my favourite! He's this retro character that not many people know about, but I just loved how he turned out. And I got to use my favourite colour yarn, cyan, on him :) I knew of Hangyodon even as a child and always thought he looked a little like the Creature from the Black Lagoon. Not cute, I know, but that movie was one of my older sister and brother's favourite - we watched a lot of horror movies growing up! So seeing Hangyodon just makes me nostalgic every time :)

I must admit, it wasn't much of a craft space before I started planning for Hello Kitty Crochet. I used to crochet all over - on the bed; by the sofa; at a table in Starbucks. It was after I started working on the dolls for Hello Kitty Crochet did I realise that I badly needed a space of my own, and one that would at least look inspiring. My husband was sweet enough to clear out his old stuff to make way for my growing stash of yarn, plus a brand new craft table and chest of drawers, in the study. Now I craft on a long, white (but rarely spotless) table, where I have my favourite Japanese craft books and a stream of tiny kawaii figurines on display. I also recently purchased a sewing machine (but have yet gone past learning how to sew straight), so that's taking up one end of the table :) The wall in front of me is plastered with all my favourite images in postcard form - from Yoshitomo Nara and Aranzi Aronzo designs to Shinzi Katoh and Le Petit Prince. The light streams in from the windows to my right so where I usually sit to crochet (and watch anime while I'm at it) is converted every other day or so into my photo-friendly space where I photograph my craft subjects.
Piled on my desk is also a whole lot of Hello Kitty and Sanrio-themed stuff that I started collecting recently - a Hello Kitty can of pomegranate tea, a Hello Kitty Japanese Guide Book to Japan, a Hello Kitty ballpoint pen craft book, a Hello Kitty balloon leftover from my birthday in July (complete with Hello Kitty cupcakes) and a set of four Sanrio plush keychains that I plan to stream up like a bunting :)

I guess you could say that I've always been interested in the cute and quirky and crafty stuff, but I was never any good in art growing up. My sister and brother were both amazing when it came to painting and sketching with charcoal or crayons or moulding fantastic figurines out of clay -- I was just all hands. I was infamous for painting in the lips of Barbie dolls (my sister's, mind you) with pink markers when I was about four, but that was as creative as I got :) My mom was really crafty though, and she used to handsew Raggedy Ann pillow dolls for us, or whip up homemade playdough in all kinds of fancy colours!

I think it was about three years ago when I sat down and really got serious about getting myself a hobby. I tried my hand at sewing felt dolls, but I'm really no good with sewing straight. It was after chancing upon a book called Crochet Animals, that I considered doing something entirely out of the norm. I had never crocheted before in my life, and I really thought I could just pick it up like that from referring to the book. Boy was I wrong! It took me a dozen tries and I actually gave up in between -- I couldn't make heads or tails of something as basic as the magic ring :) Thankfully, my husband had the good sense to search up some Youtube videos on amigurumi for me (he claimed that videos were easy enough even for him to understand), and that's really how I got started! The first thing I made (I had a skein of white yarn and a 3.5cm bamboo hook) was a lamb, and a dead-looking one at that! It was full of too-large holes in between the stitches but I loved him nevertheless! He's now somewhere in the closet, guarding the rest of my two-year-old and under amigurumi friends :)
Oh and when I finally mastered the art of crocheting, the first thing I wanted to do was to share free patterns with all my fellow crafters -- many have been so generous with their patterns and tutorials while I was struggling with reading my first one that I really wanted to give back in whatever way that I could. Till today, I still share free patterns, usually on my favourite cartoon or movie-inspired characters, on my blog and I hope to keep that up!

I'm a big fan of children's books/literature, which actually inspire a lot of my work! I love Neil Gaiman's Coraline and The Graveyard Book, I'm totally in love with Tove Jansson's Moomin series, Antoine de Saint-Exupery's Le Petit Prince and recently Kate DiCamillo's The Miraculous Journey of Edward Tulane -- that was a fantastic book! I also read a lot of manga, and my current favourite mangaka (manga author) is Ai Yazawa, who did the fabulous Paradise Kiss and Nana.
As for crafty heroes, I love Twinkie Chan's colourful world of food-themed crochet; Inhae Lee and her too-cute My Milk Toof buddies are my go-to stress relievers; Mizutama Hanco's rubber stamp projects always make me happy; and Miyuki Ichikawa's neat and beautiful amigurumi work :)

Anime - all kinds - have been a great source of inspiration for me. It has now become a habit that whenever I crochet, I have to turn on my Macbook or iPad and have an anime episode ready for watching. I tend to veer towards the romance, slice-of-life shoujo anime themes, which have the cutest girl characters ever. Every now and then I'd chance upon a character that I really like and that'll inspire me to make an amigurumi just like it :) I actually started taking Japanese lessons two years ago so I could better understand the conversations (in an anime) without having me to look up to read the subtitles while crocheting ;) It's been working fine so far!

I've always wanted to try making my own stop-motion short film so I may give that a go. I think I've done one before, it's on my YouTube channel now (youtube.com/amigurumei) starring two of my favourite amigurumi dolls Mei-chan and Pippi but I thought the lighting was a bit too bright in that :)
I would love to come up with another amigurumi book featuring my own characters this time around -- it'll definitely be packed with the cutest characters yet! :)

Hello Kitty Crochet is all about cute: the whimsical world of Hello Kitty and her Sanrio friends meets the Japanese art of amigurumi, or crocheted dolls. With easy-to-make patterns for adorable characters and accessories, Hello Kitty Crochet allows you to make all your favorites, new and old, from Badtz-Maru and My Melody to Pekkle, Purin, and Little Twin Stars. Whether you’re a seasoned crocheter or have never picked up a hook, you’ll find helpful tips and how-tos for creating kawaii crafts. It’s the perfect way for crafters and cuteness lovers alike to celebrate the 40th anniversary of Japan’s most famous kitty.

more than a little inspiring. I agree about Twinkie Chan her creations are entertaining and sweet!
Reply