I am into crocheting and sewing. I adore randomness. Colors. Geometry. Space. Trippyness. Nice people.

Those are just a few things. 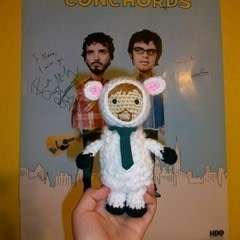 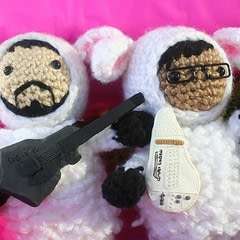 Flight Of The Conchords Plushies

Whittie 27th May 2009
You're welcome - but it's very much deserved! Those plushies are just so cool!
Reply

well, it was more of an article interview, but they had been previously talking about how fans react to the conchords and she said the fans have gotten a lot more dedicated since she filmed the documentary..
Reply

Miss Dee · Melbourne, Victoria, AU · 27 projects 5th March 2009
No...thank YOU! For making the most gorgeous Flight of the Concords plushies ever!

And I agree totally with Schwartzy...Mighty Boosh is awesomely genius!

hey if you like Flight of the conchords,I recommend watching the Mighty Boosh if you havent already!amaze.
Reply

rebecca o. · 10 projects 6th December 2008
I saw it on the Craftzine blog, but I don't have the link offhand. It should be somewhere in their amigurumi and toys archive though.
Reply