Get stitching with Andi from Untangling Knots!

When did you first start knitting / crocheting and where did you learn?

I taught myself to knit as a weird act of 13 year old rebellion. My parents told me that I sat around and watched too much TV so they made a rule that I could no longer watch TV unless I was also doing something else. I decided to teach myself to knit because I could technically follow the new rule while knitting, but I still would be sitting around watching TV so my parents weren’t getting what they wanted. I bought a few books and some yarn and just tried stuff until I figured it out. The whole thing was silly, but I ended up falling in love with knitting so it worked out okay.

My how-I-learned-to-crochet story is a little different and makes me sound less like a petulant brat. One of my friends in high school who also was a knitter was making a bunch of scarves to donate to a charity that helps out homeless teens. I knit a few scarves for her to donate, but knitting scarves takes quite a long time. She had been learning how to crochet and discovered that it was much faster than knitting so she passed on that knowledge to me. We used to work on scarves in the back of our Pre Calc class. I like to joke that the only thing I learned in Pre Calc was how to crochet.

The first project I finished was a bulky garter stitch scarf made from Lion Brand Thick and Quick. I watched all of the extended editions of Lord of the Rings while I worked on it, and I still wasn’t finished with the scarf by the time that was over. I made way too many overly long scarves when I started knitting. Everything else seemed like it would be too difficult, and I liked wearing scarves so years went by before I started to branch out.

Who are your favourite pattern designers and celebrity knitters & crocheters?

Susan Crawford is definitely one of my favorites. I love the work she does to preserve vintage patterns and make them more accessible, and her own vintage-inspired designs are so beautiful. I also really like tiny owl knits (aka Stephanie Dosen). I always look forward to seeing what Stephanie comes up with. Her style is really cute and whimsical.

What are your favourite things to stitch and do you have a favorite item you've made?

I really like making cropped sweaters. They’re delightfully quick to knit, and they fit into my wardrobe well. I have quite a few now, and it’s hard to pick a favorite. That’s always changing.

I really like period murder mysteries. A&E’s Nero Wolfe is one of my favorites, and I also love Poirot, The Mrs. Bradley Mysteries and Foyle’s War. The only problem with watching period murder mysteries while I knit is that I get so many new ideas from them that I keep having to stop and make little sketches in my notebook. Other shows I like include Pushing Daisies, Wonderfalls, Veronica Mars, Buffy, Archer, Sons of Anarchy, Farscape and Battlestar Galactica.

I’m always trying out new fiber crafts, but none of them have clicked with me the way knitting and crochet have. I’ve tried needle felting, cross stitch and appliqué among other things, but I’m not very good at them. I admire those crafts, but they’re not very satisfying for me because when you’re done, you just have a nicely decorated object, not an entirely new one.

I also do a bit of sewing. That’s a skill I’m looking to improve. I started out doing a lot or reconstruction and repair work on thrift store finds, and now I’m trying to become better at sewing clothing from the ground up. I mostly just make myself circle skirts. 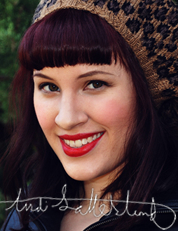