Plums In The Icebox

Get creative in the kitchen with Carrie from Plums In The Icebox!

I got into cooking first when I was in college, but I got more seriously into it when I was in graduate school. In the swirl of papers and classes, it felt really important to me to take time to relax in the kitchen. I'm a writer, so cooking is another creative outlet for me, albeit a more tactile one. I cooked a bit as a kid, when I made special dinners for my parent's birthdays and stuff like that (for my mom, eggplant parmesan. For my dad, crab imperial). My mom is a really awesome cook so I always had her example, although I didn't help her in the kitchen much. I do more so now that I'm an adult, strangely!

My kitchen is pretty small, an apartment kitchen, with not a lot of counter space OR a lot of cabinet space. I don't know how I keep organized, really, although I like to put ingredients away right after I use them. That seems to cut down on mess pretty well!

Make it part of your routine. You won't become a better cook until you're more comfortable in the kitchen, so challenge yourself to actually cook the majority of your meals. Once you get more confident, you'll find you have a sense for what works and what doesn't work: how much oil you might need for the saute or how long it'll really take that quiche to cook (ten minutes longer than the recipe suggested!) The internet (and especially food blogs) is such a great resource for beginning cooks, too. You can learn essential skills, but it also gives you free rein to combine recipes and experiment.

Pablo Neruda, Margaret Sanger, Elvis, Loretta Lynn, Princess Diana, my Italian grandmother, and my mom. I have no idea what I'd cook, though! Something healthy, something decadent, something fatty and something fun! Definitely a cherry pie though. And I'd serve lots of champagne!

I'm hoping to one day (soon) learn how to knit. I've sewn in the past but have stopped doing it as often because my sewing machine is kept in a closet and I'm too lazy to drag it out! A bad excuse though, huh? As for hobbies, I love writing, yoga, hanging out with my dog, and learning about women's health and reproductive rights.

I'm becoming increasingly interested in making food or items that I could easily buy, like kombucha or laundry detergent. It's so much more satisfying to use something you've made with your own hands! 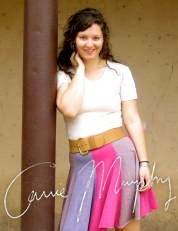