Sew along with Maddie from Madalynne

When did you first start sewing and how did you learn?

I started sewing at a later age than most – eighteen. It was my freshman year of college and I was attending a university that was close to home. My mom died my senior year of high school and some of her stuff was still stored in a linen closet, which I was poking through one day during Christmas break. That’s when I discovered her old sewing machine – a big, old hunk of metal. I was surprised when I came across it because I don’t have memories of my mom sewing. But I had time to spare and jeans to hem.

I brought the sewing machine to the tailor I had been going to since I was young. Her name is Mishka and she is the most insane, crazy, loving, whole-hearted, experienced, and worldly woman I know. She can go from laughter to tears to screaming in a matter of seconds. No joke. When I dropped my sewing machine on her industrial machine and said, “I want to learn how to sew,” she said, “really,” and then, “let’s get started.” For the next two years, I was her apprentice/mentee. She taught me everything and I still talk to her almost one a week.

Yes, and it was poofy and peach and it had a big bow on it.

Go big or go home, that’s always been my motto. When I graduated from hemming jeans to making an actual garment, I didn’t start with an apron or a pencil skirt, I made a fully lined strapless dress with a bubble hem. The shell (or self) was moire taffeta and the lining was silk chiffon. Surprisingly, the dress came together wonderfully and when I finished, my dad took me to dinner at my favorite restaurant. I didn’t wear the dress, I was too shy, but we celebrated with a father-daughter date.

Do you have any favourite pattern designers or celebrity sewers?

My favorite people in the sewing world are ordinary. I italicize the word ordinary because in my world, the ordinary people are extraordinary. I love Marci not only for her social skills (that girl knows everybody!) but her warmness and her mastery of unique and colorfully crafted sentences. I admire Lauren for ‘keeping it real’ and using curse words and lots of parentheses. I absolutely adore Anto and the weekly emails we send each other. And Sallie… she’s just amazing. She rocks!

What's your sewing room like and how do you organize your stash?

Because I live in a big city, space is limited. I lucked out when I moved into my current apartment because for the price, it’s very spacious. You can consider my apartment a one bedroom, one bathroom, and one sewing studio because I transformed my living room into a place where I can sew, cut, and pattern make. I wouldn’t have room to host a dinner party but if I wanted to have friends over to craft, I’d be more than equipped!

I’m one of the few seamstresses who controls her stash – I don’t own more fabric than I need. In most areas of my life, I’m practical, frugal, and realistic (or at least I try to be). I keep a few basic fabrics on hand for muslins but for the most part, I buy fabric on a project by project basis. The only exception is when I go to New York City. When I’m there, I stock up on fabrics but even then, I only buy for a couple of projects ahead.

What is playing in the background while I sew, whether it is music, a podcast, or a movie, depends. Just like the seasons, I go through trends. Sometimes I’ll watch reruns of Friends, The Honeymooners, or Sex and The City and sometimes I watch an oldie like Girl Happy (it has Elvis in it!). Other times, I’m more in the mood for music, in which case I could play anything from Kings of Leon to The Lumineers, Lana Del Rey, Cole Porter, Alicia Keys, Pink, or Alanis Morissette.

I try to be as worldly and well-rounded as I can so even though my primary hobby is sewing, pattern making, and blogging, I try to dip my toe into learning other forms of art such as photography, painting, web design, scrapbooking, cars, sports, etc. I read newspapers a lot to expose myself to all different kinds of information and because of a wonderful thing called Groupon/Living Social, I attend lots of workshops. 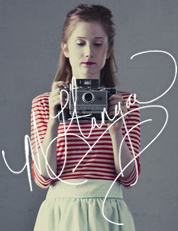 TV Show
The Honeymooners
Band
India.Arie, G. Love & Special Sauce, Citizen Cope, Lana Del Rey, or Kings of Leon
City
Savannah, Georgia (I lived there for a year while attending art school)?
Movie
Don’t laugh but You’ve Got Mail. It was my mom’s favorite. ?
Book
Twyla Tharp: The Creative Habit?
Color
Mint Green?
Fabric Brand
Can you consider Spoonflower a brand? I love the idea of creating your own fabrics.
Sewing accessory or Tool
Thimble. There is a history and a delicacy to them that I love. Plus, it’s how Wendy gave a kiss to Peter (in the book/movie Peter Pan): ...She also said she would give him a kiss if he liked, but Peter did not know what she meant, and he held out his han