Cook along with Manali from Cook With Manali

I was forced to cook when I was doing my masters in UK but I got really interested in it after I moved to US with my husband. Food became my best friend and slowly I became addicted to cooking particularly baking. The first thing that I tried was an Indian curry and it came out well.

My kitchen is spacious, earlier I had a very tiny kitchen but because I spend so much time in it we shifted to a new apartment with a bigger kitchen. I try to clean things side by side, like if I use an ingredient I put it back to it's place before moving on to the next step. I feel it's much better than cleaning everything together at the end.

Keep experimenting, trying new combinations. Things may not always turn out the way you expect them to but don't give up, have patience. And the most important thing, have fun!

Mostly Indian food because that's what I usually eat and relish. Lots of curries, naan, rice and Indian dessert like kulfi or some pudding. 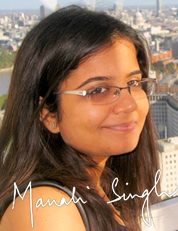