Get creative in the kitchen with Amanda from Amandeleine!

I always helped my mom with baking when I was a little kid, but simple stuff like mixing dry ingredients together for her. I had somehow convinced myself along the way as a kid that I would be terrible at baking if I did it by myself.

Then when I was in university, I visited my cousin and her kids had made "chocolate chip cookie bars" from a recipe they were given at school. Their texture was... weird. After talking with them, I found out they had decided the recipe was "wrong" because the dough looked too dry, and they had added water to the whole thing. I may have decided that I was a terrible cook/baker at some point, but I knew that baking was simple chemistry at its core, and deciding to randomly "add water" was probably not the right choice. I took the original recipe home and tried it myself out of curiousity. I admitedly wasn't a great baker from the offset, but my cookie bars did taste better than theirs!

Tiny! I live in a 900 sq. ft. condo that is mostly bedrooms and am currently working on convincing my husband that we need an upgrade. :) I would actually make a terrible professional cook because of how unorganized I am when cooking. I'm super inefficient as I like to leisurely putter about my kitchen.

Just cook! A lot! I was terrible when I started. My first few cookie bars had edges that were hard as rocks and squidgy centers. I could cut them into bars and throw away all the edge pieces and stick the very center piece on ice cream for myself before anyone could see.

Joss Whedon, Pete Docter, Jacques Torres, Irvin Kersner, Shigeru Miyamoto... Those are my top five, how many do I get to pick? Alton Brown, Ernie Coombs... Anthony Bourdain to keep the conversation going.

Although the idea of COOKING something for these people makes my heart stop a little. I am not worthy. Probably something really rich and decadent.. I'd be afraid to use chocolate because of Jacques Torres. Oh gosh, I don't know. If this ever actually happened I would probably end up crying behind the counter in my kitchen out of extreme nervousness.

As far as crafts go I love to do amigurumi crochet and I'm currently learning how to sew! I also play an obnoxious amount of video games and love to read.

If you have a huge sweet tooth (as I do) there's nothing quite like learning how to feed it yourself! It's both wonderful and dangerous. :) 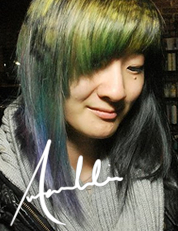