Frontman Gary Lightbody chats about touring, side projects and hearing his own records too much. 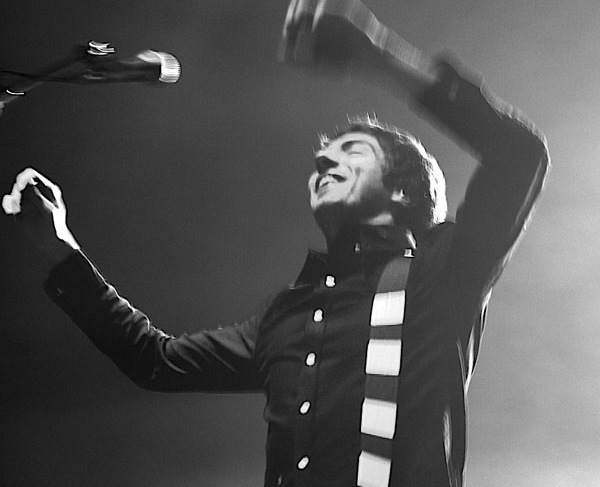 
"I hate the snow" claims frontman Gary Lightbody from Snow Patrol. Last year, the bands fourth album Eyes Open became the album of the year selling over one million copies. "Having spent most of the last four years on tour the chaos has mostly passed us by. I mean we don't really feel like a big band. If anything we've got better at dealing with life, not worse. We've been around forever so it's not like we're running round firing guns at the ceiling and driving cars into swimming pools."

Considering whether he knew if they were on to a hit with the latest album while in the studio, Gary answers, "Well with Chasing Cars, when Garret and myself did the demo a while back, everyone that heard it said it'd be massive. I guess they were right as it was our biggest worldwide hit, however I didn't believe anything until it happened. We've been burned by expectation before, so it's better to hatch your chickens before they something or whatever... it is getting a bit busy in the studio with all sorts of folk playing all sorts of instruments some of which I can't even pronounce. The next logical step would be to strip it all away to just the five of us and start again. We'll see what happens..."

The band have been heavily touring and at the end of 2006, played a huge arena tour around the UK. As a treat to older fans, they re-introduced one of their earliest singles, Starfighter Pilot. "Starfighter didn't go down very well at all. Most folk shrugged their shoulders. We played it for the few who knew it. It's our intention to play a few of the second album at the festivals. Songs that haven't been played in a while. Also, a Bee Gees medoly... It's hard to make big places feel intimate by their nature however that's the challenge. We want to play to the back of the room wherever we play. It's our job to make everyone feel involved."

Gary recently did a duet with Martha Wainwright for Snow Patrol single, Set The Fire To The Third Bar. "I've never been disappointed with any collaboration I've been involved in up to now, be it The Reindeer Section or with Martha. As far as Martha goes it was simply the act of her lending her voice to the track that made it much, much more than it ever could've been without her. She sung it twice all the way through and I think we used the first take. Exceptional. It takes me hours and hours to get the vocals right because my voice is temperamental but she is something special. She was even complaining of a sore throat before she sang. Wow! As for further collaborations I'd love to work with her brother. Ditto Sufjan Stevens, Jacob Golden, Chan Marshall, Al Green, Four Tet's Kieron Hebdon. So many so little..."

On the subject of side projects, Gary commented "I'd love to do another Section album, however I'm not sure if we could do it in the same spirit as the first two. Again, we'll see. As far as Listen... Tanks! goes, it's just me and Garret for the most part playing everything. We'll maybe have a few guests singing and on the drums and what not, but as far as it is at the moment, it's just a duo."

Gary and keyboard player, Tom Simpson recently played a DJ set to celebrate the Liquid Room's 10th birthday in Edinburgh. "I've always loved playing records, but it's really Tom who's the DJ in the band. He's the one with skills anyway. It was at his club in Dundee when I met him for the first time after I'd danced crazy to his tunes. The Trip would've been a whole lot different without the help of my mate Roy aka The Freelance Hellraiser. He was the one the put most of it together. I picked the songs and directed from the comfy chair. Ha. I'd love to do another one with him. It may happen sometime this year."

The band's latest single, Signal Fire was featured on the Spiderman 3 soundtrack. Gary discusses the importance of music in films. "I'd love to work with an indie director on a film sometime. Someone like PT Anderson, Dave MacKenize, Paul McGuigan or Shane Meadows. I think music is extremely important in movies although for the most part it should barely be noticed. The only times you notice the music in a film is when it makes the scene even better or, alternatively, if it sticks out like a sore thumb and ruins the scene it's in. I'll try and avoid that..."

With Snow Patrol's music making appearances on shows and movies including Grey's Anatomy and The Last Kiss, Gary considers whether he has every been surprised by hearing Snow Patrol while watching television. "It rarely seems to happen while I'm watching. The only time I can think of was an episode of my favourite show ENTOURAGE. They were at a beach party and everyone was dancing about to Tiny Little Fractures. To be honest though it was my girlfriend who said 'hey, isn't that you lot?'. I hadn't noticed. Pretty sharp eh?"

Find out more about Snow Patrol on their official website. (Photography by Cat Morley.)