Behind the scenes of Rookie Magazine 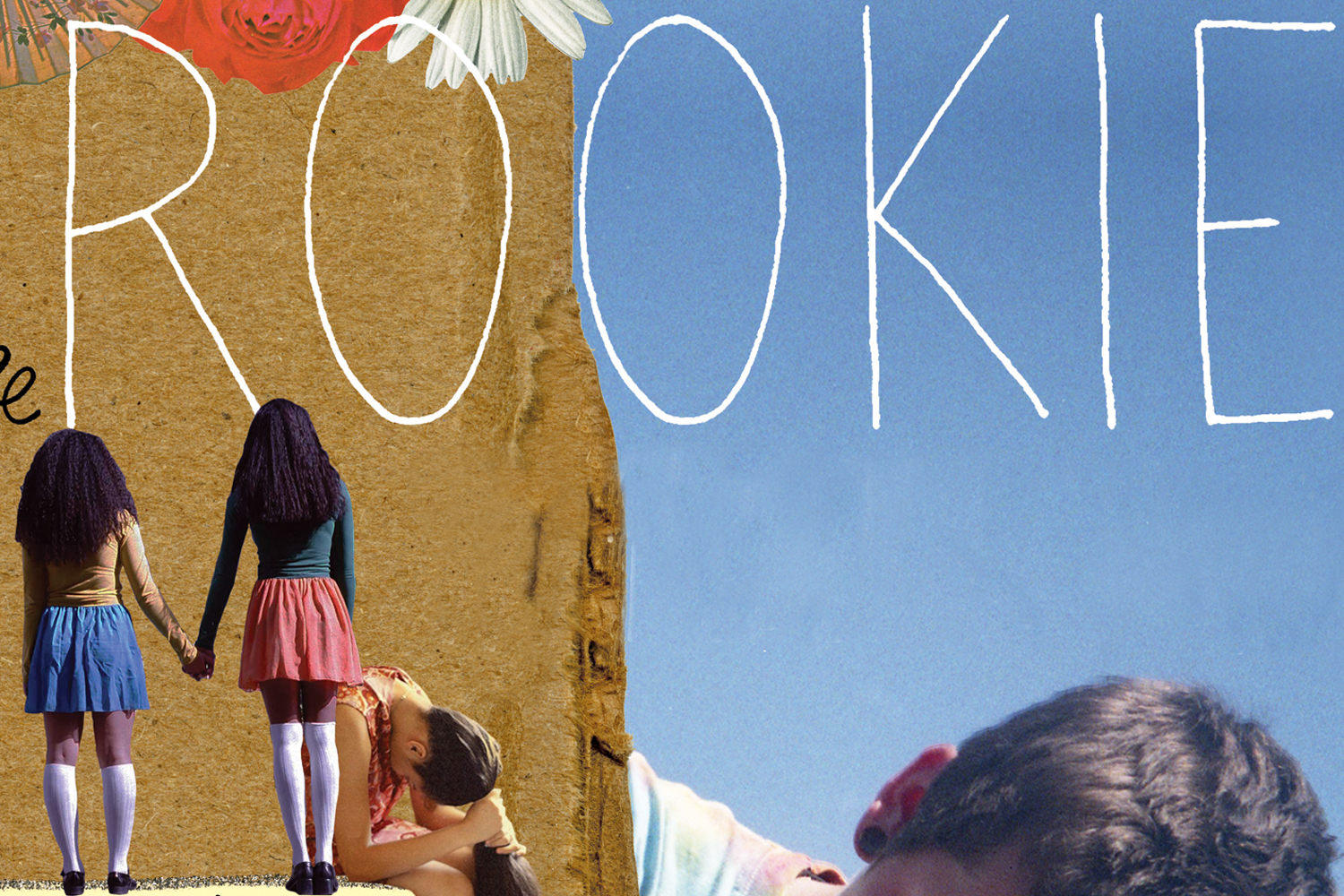 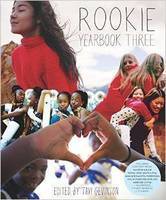 I spoke with Anaheed Alani, story editor and editorial director of Rookie, in January about the politics of feminist fangirling, teen girl culture and why it’s okay to still love Tina Fey. 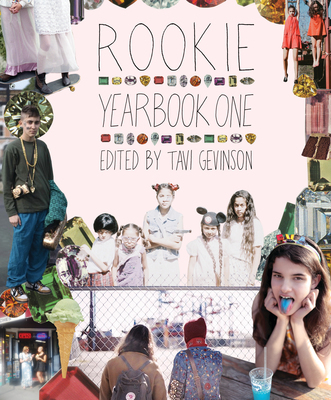 This is kind of a cheesy question, but how would you describe Rookie to someone new to the site?

I usually just say it’s a website for teenage girls, that’s about it. Anytime where I start to get more specific I feel it starts to go wrong as we’re trying to be a lot of different things at once.

I actually wrote my undergraduate thesis on Lolita. I wrote about Lolita in the book, Lolita herself, she was obsessed with these teen magazines. And so it was about the book. But it was also about teen girl culture in the 50s and 60s. And teen girl magazines in the 50s and 60s. So I read tons of these weird old magazines for teenage girls.

That’s so amazing with how that fits in with Rookie!

Yeah, I think I’ve always been obsessed with that stuff, I don’t know why.

That’s so interesting, cos you worked for the New York Times before right? 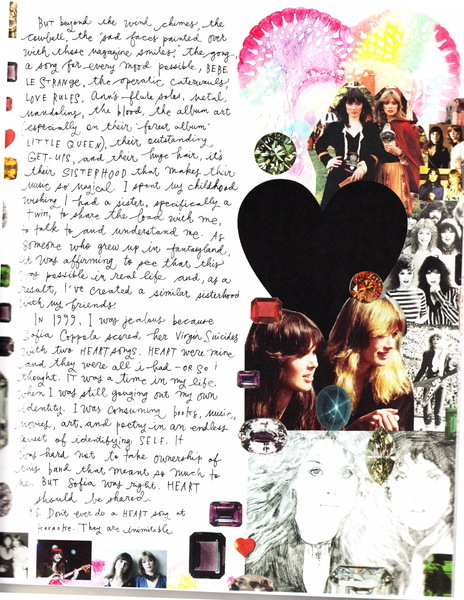 In terms of publications, I know you’re inspired by Sassy but is there any other publications you are particularly into?

Hmm let me think. Oh! Have you heard of Butt Magazine? It’s a pornographic magazine for gay men who like guys who look like they don’t work out. But it’s got really good writing and interviews and stuff. Like John Waters does a lot of stuff for it, and it’s really beautifully made. It’s so pretty and it’s on pink, pretty paper. But it’s rare because it’s a magazine where someone has a vision and cares. Oh, and I loved i-d magazine in the eighties. I mean, the eighties was really the hey day of so many magazines. Like, ‘Details’ used to be a really cool New York based culture magazine, and Bill Cunnigham used to do spreads for them. Oh, and there’s a zine called It’s Complicated which is about liking misogynist art as a feminist. 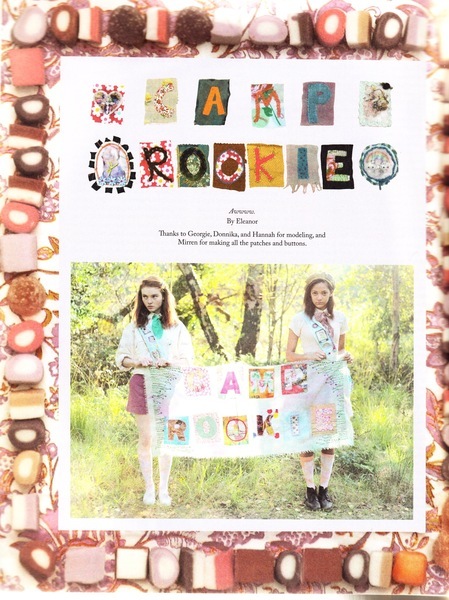 In terms of fandom, do you ever find it hard balancing being super enthusiastic about pop culture, with being more critical, like being a critical fan? I feel that it’s a big thing with Tumblr culture that because so much is problematic that it’s necessary to disown certain things.

I don’t feel a conflict at all because I don’t think enthusiasm is dumb. I think it has an intelligence and it’s not blind. Part of that tumblr culture is that people don’t realize you can be both enthusiastic and aware. And it’s that impulse to tell someone, ‘well did you know he said this five years ago?’ I feel like you have a choice, like you can look for everything that’s wrong in the world, or you can look for the things that you love. And I don’t want to live a life where I can’t enjoy Tina Fey. I don’t want to live a life where I deny myself pleasure. And it’s not being ignorant, I know what’s going on! But does that mean I have deny myself the pleasure of enjoying some of the best movies and TV shows in America? So no. I don’t think there is a conflict, or that it’s one or the other. We’re complicated people. We can contain both things at once. I like being happy and looking for beauty in the world. Instead of making myself miserable and other people miserable.

[Laughs] Okay, this one is also kinda cheesy, but who do you fangirl over?

I fangirl over the Smiths, I fangirl over Fiona Apple. I fangirl over comedians big time, I’m like a huge comedy nerd. And there’s a bunch of them who I love and worship, like I love Louis CK , I love Maria Bamford.

Another question on fangirling, there’s so many amazing people on your staff, are you constantly in awe of each other?

Yes! You should see our private Facebook group, where we discuss assignments but also talk and gossip or whatever. And it’s just a f**king love-fest in there, 24 hours a days of ‘you’re so amazing!!! Oh my god!!’ So yeah! We are sincerely fangirling over each other all day, every day.

Each monthly theme is like a little self-contained universe, or a movie set. Is it hard to make each one feel unique, as they’re all so distinct?

Yes, it’s getting harder and harder and harder. But every once in a while one will come out, like vision, this January’s theme. I think over time we’ll have to make the themes a little more specific. We’ll have to, because we’ve covered like every area!

Okay, do you have any favourite Rookie themes or articles?

I really like the Age of Innocence theme, I like the Vision theme, I liked Forever too and  Exploration. My favourite articles changes every day. Right now Hazel’s piece is one of my favourites, that Lorde interview is one of my favourites, Anna McConnell wrote a piece called Goodbye Googly Eyes’ about how she was coming to terms with the fact that she always had a boyfriend. And if she wanted to do something, instead of doing it, she’d attach herself to a guy who had those qualities. I thought that was really beautifully written. And the one that she wrote before that, that was called ‘Slouching towards Babylon’. That was gorgeous, I love her writing so much. And I love moments like the Morrissey interview because I know Amy Rose feels about Morrissey even more strongly than I do. Probably she loves him, the way I loved him at her age. And the fact that she got to interview her hero made me so happy. I loved Tavi’s editor’s letter for December, it made me cry. It made everyone cry. And I’m obsessed with the diaries, I’m obsessed with the diarists, so week to week I always really love them. 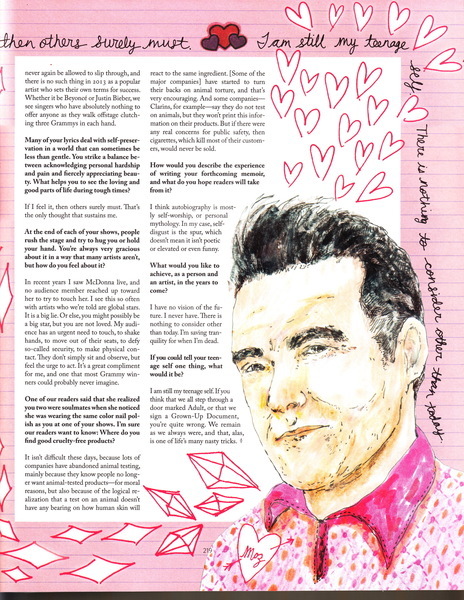 One of the things I think is really cool about Rookie is how positive it is, because I feel like a lot of women’s magazines, even supposedly feminist ones, can be quite negative, and kind of girl hate-y and just completely against being a girl. Like, how certain feminist magazines have written about Zooey Deschanel. So have you been surprised by how positive the comments and the community is?

Yes, completely floored, constantly. Because, as you know, comments on the internet are the worst place in the whole world. I don’t read comments anywhere apart from Rookie anymore because it’s so depressing. And it never stops being beautiful and mind boggling and inspiring to me, the way that that community of commenters have just decided themselves, you know? They weren’t told, no one, like, yelled at them. It just happened spontaneously that that was how they wanted to communicate with each other and they just continue to every day. It’s amazing to me.

The internet is scary, well it’s more annoying that scary in all honesty…I don’t know, maybe I’m acting all haughty because I work for the one website that’s nice! But in terms of things, like comments, we don’t talk shit about anybody and we don’t snark. So I think people respond in kind. 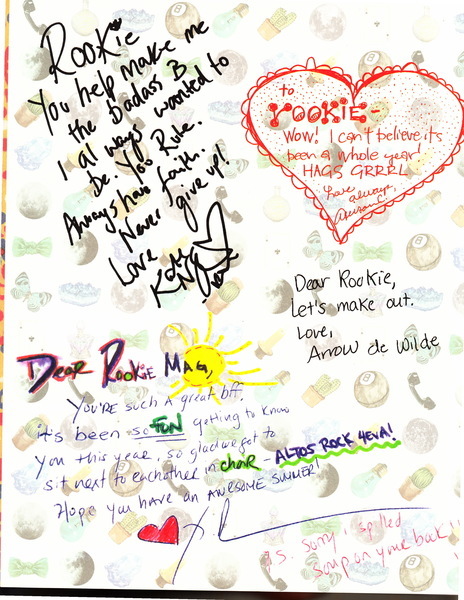 I read an interview with you in It’s Nice That and you said that you’d like to produce other print work outside of the year book. I think you mentioned a sex-ed booklet?

Yes, I do have a dream of making a sex ed booklet, which would include some of the stuff we’ve already run, but also really practical birth control advice. And we would get it sponsored by some company, I have like a perverse dream that it would be Axe body spray. And we could hand it out for free outside of high schools that don’t teach comprehensive sex education.

That’s an amazing goal. Aside from the booklet thing is there any other random ambitions you guys have?

Oh yeah, we have a lot of dreams. But I don’t know how many of them will come to fruition! We have dreams of doing our own publishing imprint, starting a record label. We definitely want to do a Rookie music festival.

Since launching the online magazine in September 2011 Rookie’s work has branched out into events, like the Rookie Road Trip, where Tavi, Anaheed, Petra and Hazel travelled across America meeting up and doing cool stuff with Rookie readers, a trip which culminated in an art show in LA, curated by Tavi and Petra. At the end of each year they also release a Rookie Yearbook, a beautifully curated print volume, which spans each monthly theme and offers the best of Rookie’s writing, photography and artwork from the previous year. Rookie Year Book Two, their most recent publication is out now, and you should totally get it because it’s awesome.

You can find out more about Rookie Mag at their website and make sure to check out author, Beth's blog.