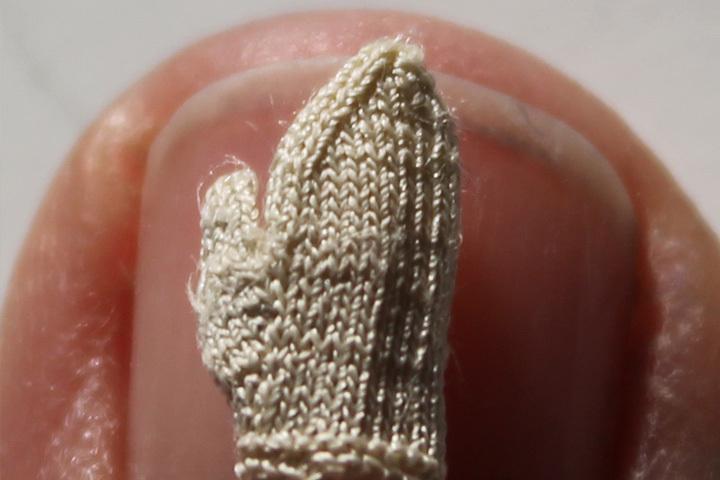 Althea Crome has made a name for herself by knitting impossibly tiny items of clothing and has even worked on the film Coraline. We sat down with her to find out more about her work and she kindly offered us two patterns for you to try yourself at home. Tiny needles at the ready... 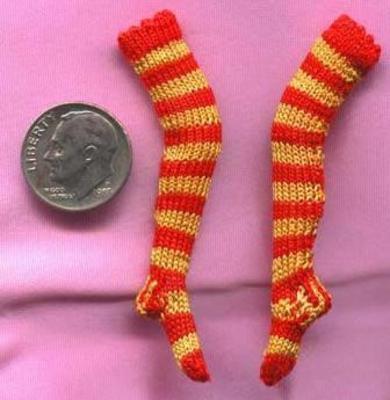 What inspires you?
All kinds of things inspire! Nature, kind people, other knitters, beautiful things in nature.  But also, I come from two very creative parents so some of my non-traditional ideas about art and creativity is simply bred in bone. My kin are all very much self made…I grew up in a family that was fairly poor and so when we needed something fixed, we figured out how to do it on our own. In my house, if a window broke, my mom would fix it by “mending” the broken window with stained glass rather than replacing the pane. Since we lived in a 150-year-old farmhouse, and they had three kids, windows got broken a lot! Most of them had corners of stained glass that my mom made to look like sunrises or sunsets. My dad made our kitchen cabinets and the handles were branches that he varnished.  There’s always a creative and inexpensive solutions to things. In my knitting, if I make a mistake, I don’t rip it out, I simply make it work! Happy accidents!

Which other artists do you like?
I have a sweet spot for Vincent Van Gogh.  But really there are just so many artists, past and present who inspire me.  Lucas Cranach inspired the Earth to Sky Cardigan. Ancient Egyptian art inspired The King Tut Cardigan.  Japanese Art inspired the Truth and Wisdom Kimono and the Japanese Crane sweater. The Ancient Greek Sweater was inspired by Grecian Urns I saw at the art museum here in Bloomington.

When and how did you get the amazing idea to knit so tiny?
I was pregnant with triplets and was building a dollhouse. But as I built the thing, I realised it was more the stuff that goes inside the dollhouse that interested me. The idea of creating something to scale that would look so real and fool the mind. My first attempts were very crude but it most definitely sparked a bright and lasting desire. 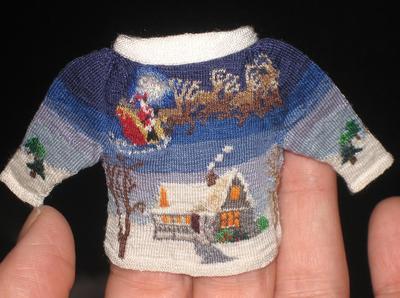 Do you like other miniature things?
I don't make any other kind of miniatures but have many friends who make stunningly beautiful things. William Robertson makes astounding items, Mark Murphy makes beautiful furniture, Mary Grady O'Brien, Leeann Chellis Wesse. There are many other fine artists but these come to mind right off the bat. Nell Corkin specializes in 1/144 scale.

How did you get involved with Coraline and what was it like to work on the film?
It was a fantastic job. I loved it. They found me through my website and I got a call out of the blue one afternoon while having lunch at a restaurant with my mother. They told me it would be Laika's first feature length film and that the director who did Nightmare Before Christmas would be making it. I was going through a bit of a rough time in my life so my first inclination was to say no because I have a fairly firm policy of not doing commissions . But, I told them to send me some info and I would think about it.  My mother knocked me upside the head and said "of course you're doing this."  And of course, I did...

It was a three-year adventure with many ups and downs. The whole search for the right thread for Coralline’s sweater was a true quest and the whole thing almost got scuttled.  But ultimately, my mom, always the hero in my life, saved the day by finding a holographic thread.  I was able to fly to Oregon twice times--once to tour the studio and watch some of the making of the film.  At that time I had the opportunity to watch some of the daily's as well as meet the director, Henry Selick and sit in on one of the creative meetings between he and the animators. The second time I flew out for the premier and was part of the post party artist demo for the film. You can learn more about that and see pictures here. It was an absolute thrill!!  The Cherry on the top was that my best friend (who accompanied me on the trip) and I ran into Neil Gaimon and his daughter at the airport and he invited us to join him as one of the privileged people who get to be “expedited” through security.  It was fun being a “VIP” for a morning. 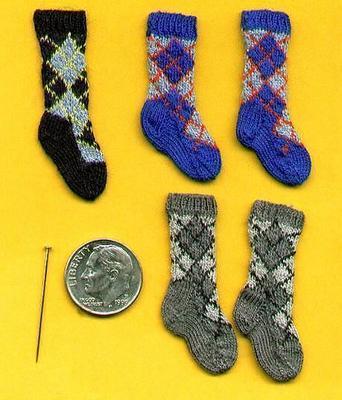 What projects are you working on now?
My projects these days revolve more around the daily business of living and raising children and paying the bills--rather dull I'm afraid.  I am the supervisor of the respiratory therapy department in a small hospital in town.  I am also raising four teenagers on my own so currently my art making is very limited. I have collaborated recently with my best friend to make a couple of public art projects—both were knitted but are HUGE in comparison to my usual projects.  The first was for the brain project, spearheaded by Jill Bolte Taylor.  You can learn more about that here and also here and see a picture of the brain Yara and I made here. I knitted the Brain Cozy which covers the entirety of the 5 foot brain (the different colors represent the various lobes of the brain) and Yara Cluver (A photographer and documentary film maker) created the Mohawk. The Mohawk is made of printed images of a Cat Scan of a brain on one side and x-rays of the spine on the other side.  The top of the Mohawk was created from medical devices donated by Cook Industries.

I almost died of a cuteness attack when I noticed your tiny under an inch gloves- amazing! Do you have collectors and what kind of people buy your work?
Yes, collectors from around the country have bought my miniatures. The conceptual art pieces have almost all gone to museums collections.  The largest collection of my work can be found in Maysville, Kentucky at the Kentucky Gateway Museum Center.

Do you sell your work online or offline?
I sell my work both on and off line.  My website is primarily there as a gallery and every now and then I will get an email from someone asking me if I have anything to sell. I also get requests for commissions but that is not something I typically do. Most of what I sell on line are the needles that I make for miniature knitting and some of my patterns. 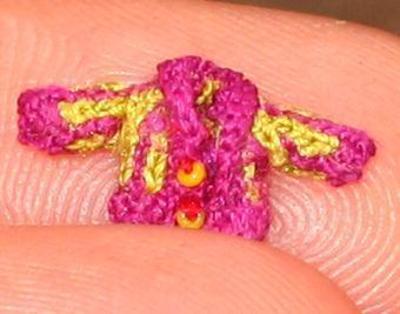 Who taught you what you know?
My grandmother was a crazy obsessive knitter but she never taught me to knit.  However, I always had the desire to do it and I tried to teach myself.  It wasn't until college that I learned to really knit--from my college roommate,  She taught me to read patterns.  From there, I always wanted to try something new--cables, fairisle, intartia, socks, gloves, etc.  Each time I wanted to learn a new skill, I would go to the local knitting shop and they would show me how to do things.  As far as my miniature knitting goes, that has all been self taught. I love a challenge and figuring out how to scale down gloves and socks and pockets and button holes has been so much fun!  When I make a knitted garment in miniature, I am very particular about it being done “authentically.”  In other words—pockets are inset, gloves have real fingers, socks heels are turned, buttonholes have buttons that work.

What is your personal favourite piece and why?
My favorite piece is the Scuba Cardigan.  It is a personal story of a day I went diving and lost my weight belt and my dive master, George and I had to find it in the reef (and we found it!).  We saw a waterspout, a rainbow, sharks, dolphins, etc.  All of those things are depicted on the sweater.  It was also a special sweater because it was my "come back" sweater after a long period of feeling un-inspired--knitters block. 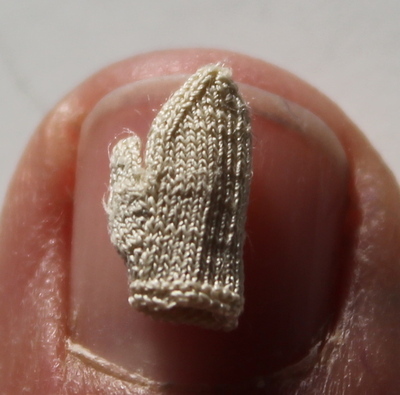 What is the smallest thing you have ever made?
Although some of the 1/144-scale sweaters are very tiny, one of the smallest things I have made is a mitten for a room box at the Chicago Thorne Rooms, which I am still working on.  The mitten is made with 100 with silk and size 10/0 needles.  Very difficult knitting. As to the questions why: To see if I could!

What took the longest time to make and how long do you spend on one piece?
The Picasso Sweater took me 6 months to make.  It was the first of the art history series sweaters that I made.  It all totally depends on what I am making. The art pieces (I also call them conceptual pieces) take months to make--from deigning them to creating and finishing them.  Before I was the supervisor of the department I had a bit more free time but now I have no free time to commit to making such complicated pieces because you really have to keep your head in the design.  Once you get away from it for even a few days, you begin to lose the momentum.

What's next for Bugknits?
I know this isn't what you meant by this question, but I am looking forward to getting my kids out of the house and having time to make art again. My oldest boy will be going to college next year and the triplets are freshmen in high school. My dream is to move to the sea after they fly the coop and have a stone cottage that overlooks the water. I would love to resume my passion for designing and knitting. <