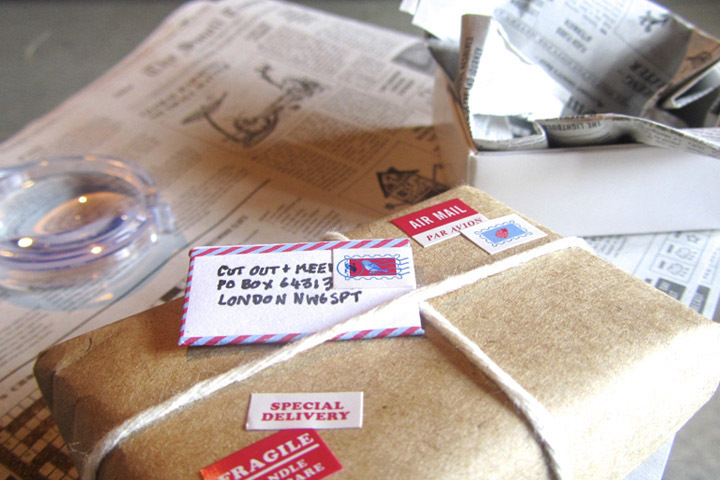 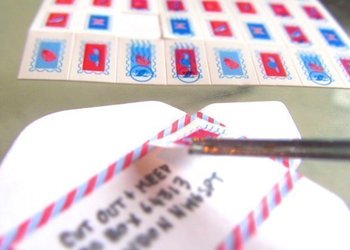 Lea Redmond started her shop Leafcutter Designs as a place to sell handmade crafts and gifts that she'd invented for friends. She explains, "After seeing lots of people enjoy what we made, we decided to make a bigger batch. We try to have things made as close to home as possible, using the most ecologically sound materials we can. We hope to bring joy, laughter, and creativity into your life with the items in our shop."

It was Lea's miniature letter writing services that shot Leafcutter to internet fame, with her unique and quirky way to send letters, invitations, cards, postcards and even tiny packaged gifts. Recently, couples have even started using the service to send wedding invitations to their guests. 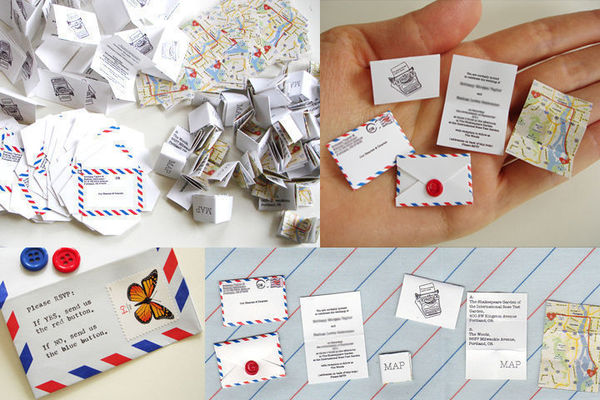 Leafcutter now sell the World's Tiniest Post Service so that you can write and send tiny letters at home. The kits includes all the tools you need to write tiny letters, with mini stamps and wax seals, and even a magnifying glass to read them. Miniature gift boxes, parcel paper and pages from The Small Times are also included, so you can send tiny gifts. 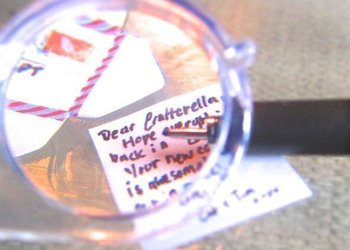 We've got one free tiny letter, written by Leafcutter and sent to whoever you want to give away to a lucky Snippets reader. To enter, just leave a comment below telling us who you'd send it to?

You can find out more about Leafcutter and send tiny letters of your own on their website.

drevanhoussen
“Hi, I live in Canada, and I met a friend through a web site, caus we both love doing scrapbooking. It,s been more then 5 years now that we encourage each other. She lives in South Africa. So i would send her the tiny letter, to see if it would travel across the world. and also,becauz I know my friend would just be touched bu this friendship gift.” 8th August 2012

Uri u.
“I would send it to my mother because she's the closest person to me and she has made the most sacrifices and cared the most for me.No matter what i do i cant thank her but a tiny letter should cheer up anybody. i like her to stay happy for ever so i'll choose my *MOM*” 12th July 2012

Cazza Bazza
“I would send it to all of my 6 BFF's. They have helped me through my parents divorce and they mean the world to me <3 ” 19th June 2012

Nymei Skial
“I would send this to my best friend, who when we were younger, sent little miniature letters to each other by "build a bear."” 5th December 2011

momoevergreen
“I would send it to my good friend in Japan. He lived in America for three years and had to go back to Tokyo. He was an inspiration to me. He learned so fast, within 2months he could speak english- and quite well. Now, back in Japan he is actually helping his English teacher, because he knows it better.
I think he would really like the miniature mail, it seems like something he would save for ever. I miss him a lot and would love to send him mail, but small and cute like this <3” 16th November 2011

Anna S.
“I'd send one to my musician friend who recently had surgery to remove cancerous tissue. 3 weeks after the surgery, she was back on stage! She's an inspiring and inspired woman, and deserves every smile she can get!” 30th October 2011

MintMintMooMoo
“I would send it to http://www.cutoutandkeep.net/users/77047 Carrie, as we used to pretend to be pixies as younglings and write each other miniature letters back then.

Each letter/envelope would get smaller..

~-*animelover~-*
“I would give it to my mother a little note with a big message that says how much I appreciate her.” 9th October 2011

Kirsten S.
“I would send it to my fiance to tell him we should use these for our wedding invitations. ” 6th October 2011

Happy-Go-Lucky
“I'd send it to my childhood friend who I haven't see in a while. We both love cute tiny unusual things

Holly M.
“I'd send it to my girlfriend. She loves miniature things and this would make her day!” 25th September 2011

linda ann c.
“I have been " making whAt I call Baby arT ". it is a way to carry a gallery arround in my purse.
I am a artist,and I had signed up for a swapp on swap bot,this was 2 years ago, It was for a paper doll.
Understand I am really into detail and small.
I made the doll,then I made her 2 bags one was a case,made from a match box, well,I took aprox 8 of my ORIGINAL water colors,army duck and so on, I scanned,and copied,or photographed and copid,then I simply kept reducing the size,I copied onto Very heavy acid free card stock, and cut into a set.
I hve also spart poly urithane, it is a very strange waxy sheen...


I then put a set of baby art u to designed match box, I incorporated a handle, and the other bag had eletronic elements ,as the clasp....I truly think itis just as these letters are....FUN. I do this all the time,and I LOVE IT ALL
kiss kiss.” 18th September 2011

<3TwIsTeD rAiNbOw <3
“I would send mine to my aunt

Ilse Valverde b.
“I would send it to my best friend alan, who lives in Canada (I'm from Mexico) He has been my best friend since always, and I miss him a lot but now he is in Canada because he won a schoolarship. I think he feels lonely because he don't know anybody yet. I will love to send a letter to him because I want to remember him that I miss him a lot, that I wish the best for him and that I will always be his support and his best friend ” 14th September 2011

Dragonfly
“I would send it to my best friend Mariella. Who is extremly creative and loves everything cute and special.
I never had real friends in my life, but with Mariella it's special. We can always make eachother smile. No matter what! ” 13th September 2011

Emily S.
“I would send this to my friend, who moved away to Maryland about 5 years ago and I miss her dearly.” 13th September 2011

hannah g.
“i'd give it to my boyfriend...whilst im about 5feet tall, he stands at about 6foot 3inches he constantly likes to poke fun at how small i am

Saritha Z.
“to my little sister, she started to learn how to read in school, this would be a real challenge for her

Shirls
“I would deff send this to my boyfriend! This Halloween would make it our 2 year anniversary. And I think this would be the perfect thing to send to him. I feel like the size of the letter represents a very big meaning - no gift, no matter how large and glamorous it may seem, can compare to a written letter telling someone how you feel. Words through a text message, via email (or anything else that involves the use of technology) - that's not the same. Everyone knows that it all started with the letter. I mean, there is a reason why they call it a LOVE LETTER and not love texts/emails.

Scharminkeltje
“I would send it to my boyfriend,who is currently trying to pass his financial law exam...and who I am separated by 300 kilometers with.” 5th September 2011

Polly M.
“I'd send it to my sister Jess to say congratulations on her engagement!” 5th September 2011

soupsoupsoup!
“I'd give it to my friend. I'm very tall, but she's waaay shorter than me and we always joke about it. I'd say it was a letter that was her size.” 5th September 2011

Emma D.
“I would send it to my partner Sammi. She collects fairies, and I think it'd be adorable to pretend one of the fairies wrote it

Roxxy Bones
“I would send it to my other half. We are saving up for our wedding currently after having to cancel it and move back home with my parents! The last 4 years he's been my rock and it'd be awesome to give him something not matter how small in return! x” 5th September 2011

Dwee B.
“I would send this to my long distance boyfriend. I haven't seen him in several months because he lives in Kenya, but we decided that email isn't romantic, so we send letters. Letters are a great personal way to let your loved one know that you care and I know that he'd absolutely love a tiny letter. We like to send funny letters like how I sent him a letter that was a puzzle and he had to put it together to read it. We love silly things like that and I know that he would love a tiny letter. <3” 5th September 2011

Mystery Craft Girl
“I would send it to a friend who collects stamps and letters. He says he loves receiving and sending letters that it is a shame that nowadays the only way to communicate (especially with your lover) would be by internet or text messaging.
The beauty of letters is sadly lost, he says. So I think he would love to receive this awesome miniature!” 5th September 2011

Princess Pam-attitude
“This is such and amazing idea for wedding invites. Makes me want to get married all over again <3

As for the Contest- I'd send it to my best friend, Nickoal. Her and I have been BFF's since we stared school together, almost 19 years ago! She is an only child and I had a house full of siblings, so she always wanted to come stay at my house where there was tons of family around, and I always wanted to stay at her house where it was quite and empty!

I've only been able to see her once in the last 4 years, because my husband is in the military, and we've been moving around a lot. But chat as often as she can afford the long-distance call on her lan-line. So most of our updates are by snail mail

I love sending her little "just-because" notes and cute things I've made for her (or her dog). It always makes my day when I get a card from her letting me know she is doing well and misses me. I think an adorable tiny letter filled with love would make her whole week, and probably make her cry a little too, lol.” 5th September 2011

Lucy Star
“I would send it to my British friend who loves miniatures.” 4th September 2011