Extract from Nigellissima • By Nigella Lawson 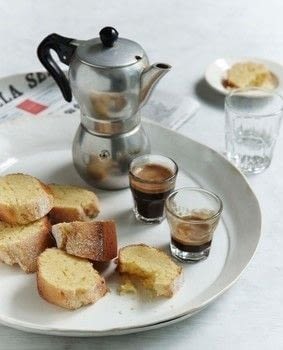 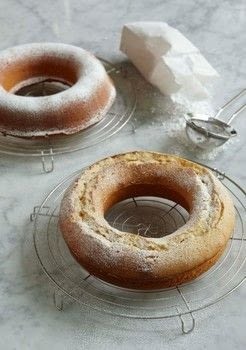 Nigellissima
if There’s a family in iTaly that doesn’t have a recipe for yogurt pot cake, then I’ve yet to meet them. And I love this plain cake with perhaps disproportionate intensity. There is something so quintessentially Italian about its scent – as it bakes, I think I’m in a kitchen in Italy – and its taste – that combination of lemon and vanilla – and even the old-fashioned charm of its method.

This is it: your yogurt pot is your unit of measurement. And even though I saw from the original recipe that I copied down (from some scrawled piece of paper in the kitchen of a house I’d rented one summer), that the specified yogurt pot had a 125ml capacity, I have kept the same number of eggs for my 150ml yogurt pot. I work on the principle that eggs these days are larger than when the cake first came into being. Anyway, it works, and that’s the main thing. And this is the way it works: for 1 cake, you need 1 pot of yogurt, 2 pots of sugar, 1 pot of oil, 1 pot of potato starch or cornflour and 2 pots of flour. In keeping with this style of measuring, you will see that I have even stipulated 2 capfuls of vanilla extract.
Although potato starch is the norm in Italy, it isn’t easily available in Britain, which is why I have substituted cornflour. Bear in mind that potato starch is denser, or rather weighs more per pot than cornflour does. Which is to say, if you’re using potato starch, it will weigh in as 100g, whereas the same volume of cornflour is 75g. I’ve specified actual weights in the ingredients list, not only so that you can make this even if you’re working from a jumbo carton of yogurt, but also because I feel the ingredients list should double as a shopping list, too.

I know this cake best in a ring shape, ciambella (pronounced “chambella”) as it’s known in Italy, and a 22cm savarin or ring mould is a fairly standard baking tin here in the UK, too, but do use a 22 or 23cm springform tin if that’s easier for you: the cake won’t be as high, but don’t use a smaller diameter because, without the hole in the middle, the cake wouldn’t cook properly in the centre if the tin were any deeper.
Finally, I’m aware it may sound a bit of a bore having to whisk the egg whites, but it only sounds it; in the days of electric whisks, it really isn’t any trouble.

This is my favourite weekend breakfast, or – indeed – anytime treat.