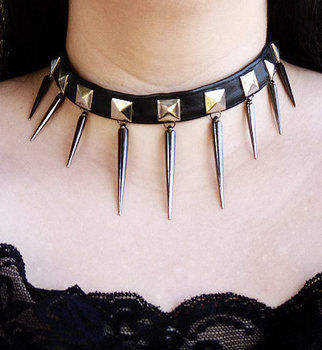 Made from recycled and scrap odds and ends.
I had a small clutch with way more pyramid studs on its strap than strictly necessary. I've been wanting to do something with the excess.

An idea finally occurred to me, then I was able to put together my idea in my mind with materials I already had. The strap came from a cruddy old purse, the spikes and jump rings came from an earring, and the Velcro was left over from another choker project.

It's really easy to make. Here's how:

Cut the strap (an old thin belt would also work well) to the right length for your neck. Place the studs where you want them and push them in, slipping a jump ring with a spike on it under the bottom prong of the stud before you fasten it down. You can put one stud on the end of the collar that will show at the back. Then glue some Velcro to the inside of one end and the outside of the other with a strong glue (I used E3000). (Put the soft side of the Velcro on the inside of the collar so that it won't be uncomfortable if it touches your skin.) Glue or stitch the cut ends of the strap so the seams won't come open.

Note: Project time is only construction time, it doesn't include the time necessary for a strong glue to dry.

Vermin Jerky posted this project as a creation without steps 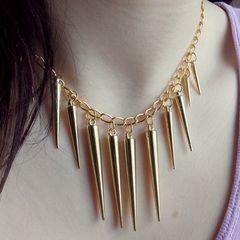 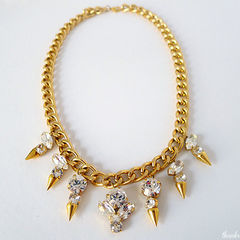 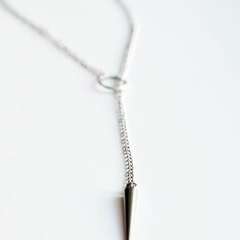 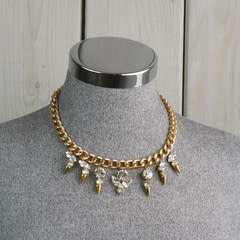 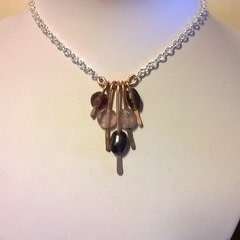 How To Make A Hammered Spike Necklace
Made this project? Share your version »

Monika Gottindottir · Worthington, Minnesota, US · 319 projects 13th October 2012
This is quite awesome! I like those spiked earrings but they're always too long... Now I have a reason to get a pair.

It's a fun and easy project, I imagine you'll enjoy it.

Vermin Jerky · San Diego, California, US · 22 projects 15th October 2012
Cool! I'll look for it. I'm looking forward to seeing your version because I thought either lace or, even better, grommet tape would be perfect.
Reply