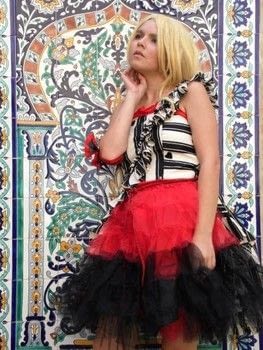 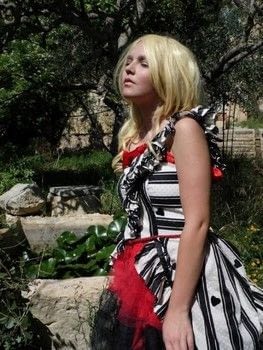 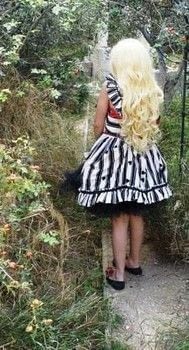 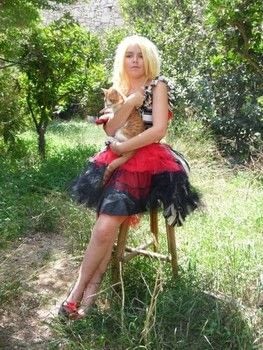 I began this costume a year or so ago, but I stopped because it was getting to difficult. I made the mistake of trying to make a one piece dress. All the tulle made the dress very bulky at the waist, and the tulle was sticking out like a pancake tutu.

I found the dress recently and decided to give it another go, this time making the petticoat/tutu a separate piece from the main dress.

The tutu is six tiers of tulle, based on sugardale's tutorial, though altered to make it 'fluffy'. The waistband is elasticated to make it easy to get on and off.

The dress (based on a Burda pattern, as usual) has a fitted and boned bodice made of white cotton, with a top layer of thin striped cotton. The back has some elastic at the top for a better fit, and closed with a side zip.

I know other cosplayers have made this dress using white organza and black ribbon, but I thought that would be too tedious, and this fabric was almost perfect for the job (and relatively inexpensive) .

The ruffle is a massive length of cloth with double turned hems on both sides. It was sewn on to the dress, and black ribbon was sewn on top to hide the seam. The red ruffle was made in a similar way.

The black hearts are velour from an old pair of trousers, and are glued on to the dress.